WHEEL OF TIME TV series picked up by Sony

Sony Television Pictures have confirmed that they are the company who purchased the Wheel of Time TV rights last year and are now actively developing the project for television. 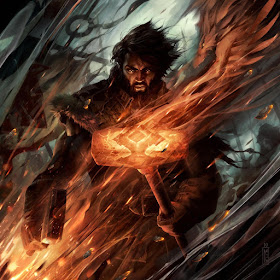 The saga of the Wheel of Time TV rights is long and complex. Suffice to say, a company named Red Eagle Productions attempted to get a film or TV show of The Wheel of Time made for over a decade before their option was due to expire in early 2015. To keep the rights, they self-funded a brief TV pilot based on the prologue to The Eye of the World, the first book in the series, resulting in a legal tussle with the Robert Jordan Estate. Last year we were told this tussle had been resolved and the TV project was moving forwards with an unspecified production partner, now revealed to be Sony.

So far no TV network has picked up the series, but there will likely be keen interest from a number of sources. HBO, I am informed, are not remotely in the running, preferring to develop series of this magnitude in-house and are also not interested in developing internal competition to Game of Thrones and its rumoured, early-in-gestation spin-off series.

The network most likely to show the series is AMC. They have been developing an enviable portfolio of genre programming, spearheaded by the ratings-destroying The Walking Dead, and have previously worked with Sony Television on Preacher, Better Call Saul and, of course, Breaking Bad. They are also rumoured to be the frontrunners to air the Dark Tower TV series (a prequel spin-off from the forthcoming Idris Elba movie), also in development with Sony. The main concern over AMC being involved is that they are infamously frugal, with even the massively popular Walking Dead made on a relative shoestring budget (for its scale) of about $3.2 million per episode. The Wheel of Time would comfortably require $5 million per episode at the start and a lot more later on, which AMC would seem less likely to stump up for. However, AMC likely want their own Game of Thrones-challenging fantasy show and would know that this would come with a much higher price tag.

Starz are also likely a strong candidate. They are more generous with the pursestrings and have likewise worked with Sony Television on their breakout success, Outlander. Showtime are also possible, as Sony has worked with them on Masters of Sex and The Tudors, but are perhaps less likely to stump up the large budget required.

An intriguing possibility is FX. FX and Sony previously worked together on The Shield, Rescue Me and Justified. FX is probably underrated in the TV stakes, but their portfolio of shows is far more impressive than might be first thought: in addition to the above, FX have also produced Sons of Anarchy, It's Always Sunny in Philadelphia, Archer, American Horror Story, Legion, Atlanta, The Americans and Fargo (the latter two both strongly claiming the title of Best Show on TV). FX also showed Red Eagle's self-funded pilot back in 2015. Although that was a self-funded advert with no creative input from FX, FX did pick up a lot of queries about the project and obviously would be aware of the ratings and other feedback.

More tantalising would be a collaboration with an online streaming service. Sony have worked with Amazon on Mad Dogs and The Last Tycoon and with Netflix on The Get Down. Both Amazon and Netflix would likely loosen the pursestrings for The Wheel of Time (Netflix is spending $7 million per episode on Altered Carbon, and that novel is all but obscure compared to WoT) and Sony are likely interested in exploring the streaming space further.

Sony have confirmed that they have already hired the writer and showrunner for the series. Rafe Judkins entered the Hollywood sphere in 2005 as a contestant on Survivor before becoming a writer. He has since worked on The 4400, Chuck, My Own Worst Enemy, Hemlock Grove and Agents of SHIELD. Judkins frequently collaborates with screenwriter Lauren LeFranc, so it may be possible she will also write for the show.

The next step will be finding a network partner and beginning the process of developing scripts and casting. I suspect it will be 2019, at the earliest, before we see The Wheel of Time on TV. But although it will be a while before we see Rand, Loial and Nynaeve's Braid on TV, at least we now have a beginning.


Thank you for reading The Wertzone. To help me provide better content, please consider contributing to my Patreon page and other funding methods, which will also get you exclusive content before it goes live on my blogs.
Adam Whitehead at 18:53
Share