The cover art has been revealed for The God is Not Willing, Steven Erikson's next novel in the world of his popular Malazan Book of the Fallen series. 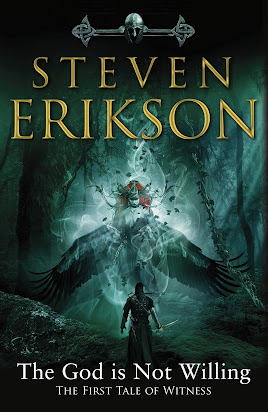 The God is Not Willing is the first book in the Witness Trilogy, which picks up on dangling plot threads from the Malazan series. Specifically, it deals with the fate of the Teblor people of far northern Genabackis and the expected return of the infamous warrior Karsa Orlong (although Karsa himself is not expected to appear in the first volume).

This is the first Malazan novel by Erikson since Fall of Light in 2016, the second book in the Kharkanas Trilogy. Disappointing sales saw Erikson and his publishers agree to delay that trilogy whilst bringing forwards the Witness books, which they agreed were likely to be more commercially appealing. Since completing The God is Not Willing, Erikson has returned to work on Walk in Shadow, the concluding volume of the Kharkanas Trilogy.

The God is Not Willing is currently listed for publication on 1 July this year. Erikson's collaborator Ian Esslemont is also working on the fourth book in the Path to Ascendancy series, with the working title The Jhistal, with a tentative release date in November this year.