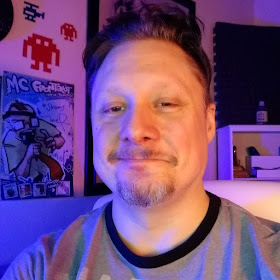 Young was born in 1971 and first came to notice in the video game field in the 1990s, designing fan-made maps for Doom. During this period he created the 1995 map "Doom City," which attempted to create an urban environment in the Doom engine, and the 1996 campaign Phobos: Relive the Nightmare, a full nine-level game.

He began blogging and writing about video games and pop culture in the early 2000s, in particular calling attention to writing and how many modern games and movies ignore basic tents of good writing in service to spectacle, often disregarding logic along the way. He also focused on the development of new technology in video games, producing both blog entries and videos on things like raytracing, megatextures and the issues of developing for the famously fastidious PlayStation 3 architecture.

In 2006 he arguably achieved his biggest impact when he launched DM of the Rings, a comedy webcomic that re-imagined Peter Jackson's Lord of the Rings movie trilogy as a Dungeons & Dragons campaign. He used this format to provide alternate explanations for plot choices in the movies, such as Elrond teleporting to Theoden's camp to give Aragorn his sword because he forgot to do so before they left Rivendell. He used the format to comment on Tolkien's original story, Jackson's adaptation choices and the foibles of roleplaying. The format inspired several imitators, such as Darths & Droids which does the same thing (although far less concisely) with the Star Wars movie series.

Young later created the webcomics Chainmail Bikini and Stolen Pixels, and co-hosted the video game commentary series Spoiler Warning. He wrote two novels, The Witch Watch (2012) and The Other Kind of Life (2018), and a memoir, How I Learned (2011), focusing on how he was declared "learning disabled" as a child but overcame adversity to work in the video game field.

Young was also infamous for his lengthy, erudite and witty essays critiquing video game storylines in unusual depth. His analysis of all four Mass Effect games became so huge and renowned that he assembled it into a book, Mess Effect: A Nitpicker's Guide to the Universe That Fell Apart, in 2021.

Young passed away on 15 June from cardiac arrest. He is survived by his wife Heather and three children, and will sadly be missed.