Scott Bakker's brother Bryan has shared some insights into the 1980s Dungeons & Dragons campaign that resulted in the creation of the world of Earwa, the setting for Scott's Second Apocalypse series (subdivided into the Prince of Nothing trilogy and Aspect-Emperor quartet). 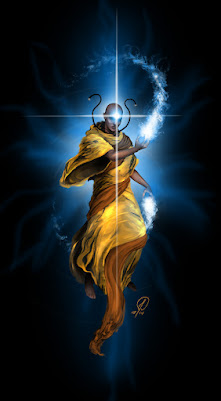 Artwork by the excellent Jason Deem (aka Spiral Horizon)
He includes some reminiscences about the games they played as kids, some maps and illustrations, and even a poem that arose from their gaming. It's interesting seeing standard D&D races like gnomes existing alongside well-known Second Apocalypse names like Scylvendi and Mekeritrig.

At the end, Bryan shares some thoughts on Scott's radio silence for the last couple of years and the prospect of future books in the series. Famously, Scott was debating on whether leaving The Unholy Consult as the last word on the series, as he'd originally planned, or proceeding with a concluding duology/trilogy. That debate still seems unresolved.

For those interested in the now, some have commented on the fact that Scott has been quiet online in recent years. Suffice it to say he has gone through a lot. His singular focus right now is raising his daughter and building his family's future.

As for the future of the series, I've heard him say two things, over the years, about how the Second Apocalypse should end:

One was that there would be a third trilogy outlining the blow by blow of 'you know who's' rise. I know outlines exist for such a story, but just outlines.

The other is that the story is finished. That 'The Unholy Consult', is a fitting way to end a sprawling epic about the death of meaning.

For my part, I can't help but to think that this massive story was where Scott's creative life began and, it would not surprise me if, after his real life trials are complete, he doesn't return to it, before the end.

Like a favourite old coat - warm and comfortable - and smelling of sulfur (: