News has sadly broken that British SFF author and artist Patrick Tilley has passed away. He passed on 25 May 2020 at the age of 91, although the news had flown under the radar until now. 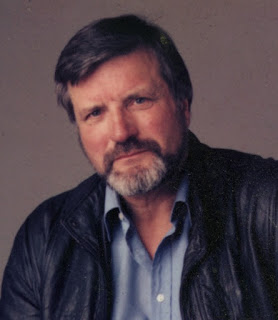 Born on 4 July, 1928 in Norfolk, Tilley studied art at the University of Durham and worked as a graphic designer in the 1950s. He travelled widely in the United States, falling in love with its vast landscapes which informed much of his writing. He switched careers to scriptwriting, penning an episode of the TV series Crane in 1964 and then penning the screenplays for the films Wuthering Heights (1970), The People That Time Forgot (1977) and The Legacy (1978).

He changed gears again to novels, penning the excellent but mostly-forgotten SF disaster novel Fade-Out (1975), in which an alien spacecraft arrives on Earth and inadvertently drains the planet of electricity, ending civilisation as we know it. His second novel, Mission (1981), postulated the arrival of Jesus Christ in modern-day New York. Tilley eschewed the perhaps more instinctive idea of simply repeating the New Testament story in contemporary America in favour of a more colourful space opera in which Jesus's return is part of an interstellar war between two alien powers, with Earth caught in the middle. The book accrued a small but passionate cult following.

Xan (1986) is a more conventional SF thriller in which a small family, newly arrived in Gainsville, Kansas, is caught up in events as an alien lands in the town to conduct reconnaissance before a full-scale invasion, leading to abductions and various other Close Encounters-but-the-aliens-are-bad shenanigans. Star Wartz: Tales of Adventure from the Rimworld (1995) is a pastiche of SF "Big Dumb Object" novels (such as Larry Niven's Ringworld or Arthur C. Clarke's Rendezvous with Rama), set on the Rimworld, a collection of 1,476 planets moved into orbit around two suns. A young man from Earth is transported to the Rimwold and gets involved in various misadventures.

However, Tilley will be best-remembered for his ambitious and impressive Amtrak Wars sequence: Cloud Warrior (1983), First Family (1985), Iron Master (1987), Blood River (1988), Death-Bringer (1989) and Earth-Thunder (1990), along with companion volume Dark Visions: An Illustrated Guide to the Amtrak Wars (1987). Melding science fiction, fantasy, dystopian, post-apocalyptic, Western and samurai themes, the six-volume series is set a thousand years after a devastating nuclear war has ended civilisation. A group of incredibly rich billionaires foresaw the apocalypse coming and set up a colossal underground bunker complex thousands of feet Houston, Texas, and in the following centuries have expanded this through surface waystations and subterranean, high-speed vac-trains to an entire civilisation, the Amtrak Federation (renamed the Lone Star Confederation in a reprint of the series). The Federation, led by the hereditary President-General, believes its manifest destiny is to recolonise the surface world by any means. However, in the intervening time the descendants of the less-fortunate survivors who had to eke out a living on the radiation-blanketed surface have spread out and colonised most of North America, forming a vaguely Native American-inspired tribal and nomadic society known as the Plainfolk Mutes. When the Federation sends its first wagon-train (a land-based combination of dreadnought and aircraft carrier) into Plainfolk territory, it triggers a war between their own high-tech civilisation and the Mutes, who have primitive weapons but an ace in the hole: an inexplicable ability to manipulate the natural elements. The series follows what happens to antihero Steve Brickman after he is captured by the Mutes and then escapes back home.

Later books in the series expand the worldbuilding to include an exploration of Ne-Issan, a civilisation reminiscent of Shogun-era Japan located (slightly inexplicably) along the Eastern Seaboard, and complex politics within each of the three major factions. The series ends on a distinct downer note; at one point Tilley planned a continuation of the story with a further trilogy (the first book of which, Ghost Rider, was reportedly started but never finished) but never completed the project, leaving the afterword to the sixth book (which seems to have been specifically written to provide closure to the series should the sequels not appear) to wrap things up. By the time the series was done, he'd effectively retired to become a sheep farmer in Wales.

In 2009 an Australian film company optioned the rights to The Amtrak Wars and developed the idea as a feature film adaptation to be called The Talisman Prophecy. The project dried up due to a lack of studio interest, which is a shame because amongst a lot of identikit epic fantasies and post-apocalyptic dystopias, the story actually has quite a few fresh spins and interesting ideas that could make for an original adaptation.

Patrick Tilley was a skilled worldbuilder and storyteller, particularly delighting in political intrigue and knotty scheming by morally ambiguous characters. His writing could over-indulge tropes and occasionally be cheesy (such as very odd, isolated fourth-wall-breaking moments) but his ability to stitch together widely disparate inspirations into a compelling and coherent narrative was impressive. He will be missed.

He is survived by two sons and a daughter.