Having escaped from the clutches of the M'Call Mutes, Steve Brickman triumphantly returns to the Federation fully expecting to be congratulated on his exploits and his gathering of vital intelligence on the enemy. Instead he is arrested as a deserter and narrowly escapes death before being sent to menial, ball-busting work in the A-levels. According to the doctrines of the First Family, the rulers of the Amtrak Federation, Mutes do not take prisoners, and that 'truth' cannot be contradicted. But now Brickman knows something of the truth the Family has other plans for him, and for his Mute friends... 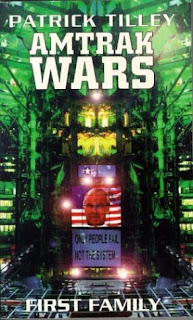 Picking up immediately after the events of Cloud Warrior, the second volume in The Amtrak Wars is a slightly different beast. There's still a fair amount of action and the pace remains furious and at times page-turningly addictive, but after the straightforward plot of the first book things get murkier here. Conspiracies are revealed, deeper mysteries are alluded to and labyrinth plots are set in motion. Political intrigue also rears its head as we meet some key figures within the Family, such as the President-General and Karlstrom, the ruthless head of the clandestine intelligence agency AMEXICO. Tilley's grip of worldbuilding also remains strong, as we begin to learn more about the shadowy Iron Masters who live on the Eastern Seaboard and trade weapons with the Mutes through great steamships ploughing the Great Lakes.

As I mentioned in the first book, true-blue all-American hero Steve Brickman started off as a bit of a lemon, but in this second book he starts evolving into a more interesting protagonist. A key theme of the series is Brickman's torn loyalties between the Federation and his family, and the Mutes, his would-be mentor Mr. Snow and Steve's would-be lover, Clearwater. This results in Steve having to spin out some pretty spectacular lies, cover-stories and half-truths to keep either side from plugging him, and seeing Steve struggle through the mental gymnastics required to keep one step ahead of everyone else is fascinating (and it's all rather mild here, compared to the labyrinth of plots and counter-plots that have developed by the final volume).

The writing in this volume is also notably better, with Tilley restraining his more excited passages to convey the action in a slightly more thoughtful style. However, the refreshingly informal prose remains intact, as do the slightly confusing multiple POV switches in one chapter.

First Family (***½) steps up the pace, deepens the world and the story and the cliffhanger ending effectively hooks the reader into the third book in the series, Iron Master. Again, the book is out of print at the moment but copies seem to be available in the UK and USA.
Posted by Adam Whitehead at 20:04