Sam Tyler is still stuck in 1973, unsure if he has somehow really travelled backwards in time or if he is merely stuck in a coma in 2006 and is fantasising everything that is happening to him. However, now he has been there for a few weeks he is getting more used to life in the 1970s and is starting to downplay the unusual auditory and visual hallucinations he continues to suffer from. But, just as things seem to be settling down, questions about Sam's previous 1970s life in 'Hyde' before relocating to Manchester arise, and set in chain a sequence of events which could lead Sam home...wherever that is. 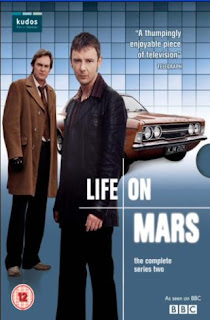 Life on Mars' second season was the last, due to a combination of the producers not wishing to over-exploit the concept and lead actor John Simm's well-known reluctance to be typecast in a long-running television series. It was a bold decision for a series that had become a big hit on British television and done the seemingly impossible by getting audiences fired up over a cop show.

The second season offers up pretty much more of the same as the first season: Sam and Gene butt heads over their different approaches to policing, but they have, grudgingly, accepted that each has skills the other does not, and when they combine their approaches it often leads to good results. Sam and Annie continue to not quite get it together in the tradition of all great TV will-they, won't-they romances, and Sam continues to be haunted by hallucinations of his life in 2006 which relate to his current situation in 1973. The show also moves onto slightly more contentious ground in Season 2 by covering the more controversial subject of IRA terrorism in one episode whilst continuing to examine the extent of corruption and heavy-handed methods in the 1970s police force.


In my review of Season 1, I mentioned that the show's continuous use of Sam's odd mental state occasionally gets a little exasperating, as sometimes you'd quite like to just see Sam and Gene butt heads and then solve the crime without Sam freaking out every twenty minutes. The producers play on this in two episodes in particular in the second season, one in which Sam doesn't have any odd experiences and starts getting worried about the lack of them, and another in which Sam reacts very badly to whatever is happening to him in the present and has to sit most of the investigation out. This latter episode, which is by far the most 'freak-out' intensive of the series, also perversely is one of the very best episodes, with flashbacks showing how they operated before he arrived (and giving rise to the unusual sight of scenes not featuring Sam, which feels odd as he is in every other single scene of every other episode of the whole series).

Of course, as good as the individual episodes are (and they are pretty damn good), the one episode that everyone will be left talking about is the very last one. British SF is awash with series-ending episodes that leave the audience reeling and talking about them for years or decades afterwards: Blake's 7, Sapphire and Steel and The Prisoner being the most notable (Quantum Leap's befuddling finale is probably the USA's closest equivalent). Life on Mars joins their august ranks with a finale that takes the viewer on a crazy existential rollercoaster ride as we finally get an answer for what is going on with Sam, but that answer is in turn supplanted by another, contradictory one in a manner that would make Christopher Priest proud. Which is the truth and which do we believe? The finale operates on multiple levels of reality with the viewer not quite able to trust what is going on. There is a very clear 'obvious' possible answer for what is going on, but just as with David Lynch's Mulholland Drive, that 'obvious' answer still leaves other, key questions unanswered.

Taken in isolation, Life on Mars' finale is very strong indeed. However, the news that a sequel/spin-off series was forthcoming which would shed more light on events did dilute the strength of that finale a bit, and Ashes to Ashes' plot developments have indeed plunged much of what we thought we knew from Life on Mars' finale into doubt. But further examination of that series is for another review.

The second season of Life on Mars (****½) is thoroughly entertaining, funny, thought-provoking and just the right side of ambiguous. It draws a line under the series and sets up the sequel series quite nicely. It is available now in the UK (DVD, Blu-Ray) and will be released in the USA on DVD in November.
Posted by Adam Whitehead at 01:20

Good review and thank you for avoiding spoilers.
Anyway I'm nosy how the series will end.
On last Sunday the first episode of season 2 has been aired on Germany TV.