Tulsa, Oklahoma, 2019. A white supremacist group, the Seventh Kavalry, is fighting a long-running battle with the Tulsa Police Department. To protect their identities after several of their number were assassinated, the police have been given special dispensation to hide their identities under masks; the Kavalry likewise hide themselves under masks based on that of the vigilante Rorschach. Police officer Angela Abar, who goes by the nickname Sister Night, is tasked with helping flush out the Kavalry and receives assistance from Jean Smart, formerly known as Silk Spectre, now an FBI agent. Meanwhile, Adrian Veidt, formerly Ozymandias, "the smartest man in the world" who may be also its greatest mass-murderer, finds himself trapped in the strangest puzzle box ever devised. 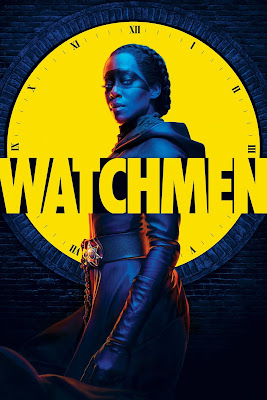 When it was announced that HBO was proceeding with a TV series based on the classic Alan Moore/Dave Gibbons graphic novel Watchmen, there was widespread scepticism. The previous film version of the novel (only released in 2009) was not particularly accomplished but was adequate, raising the question of if a further adaptation was necessary. The TV show, however, quickly hewed in a different direction, becoming more of a thematic sequel to the comic book and being set more than thirty years after its events.

The TV mini-series (which started as a regular series but was converted into a mini-series when the production team expressed doubt about returning) has ended up being, somewhat surprisingly, a qualified success. Damon Lindelof and his writers have crafted a new story which at first glance feels only tangentially connected to the original, but as the episodes pass it becomes more and more deeply entwined with the events of the original graphic novel and ends up being a strong continuation.

In the original graphic novel, Alan Moore (who was, as is his custom, not involved in this new project) created Rorschach as an exploration of what a vigilante without any oversight would end up being like in the "real world." Rorschach ended up giving his life for his belief that the people deserve to know the truth about what really happened in New York City and his message did get out in his journal...which was promptly dismissed as the tinfoil ramblings of a lunatic. Conspiracy theorists have gotten hold of his journal and used it to further their own insane agendas, further discrediting Rorschach's story, although we (as viewers) know it was completely true.

The tie-ins with the original series take a back seat for the first three episodes or so, which focus more on Sister Night and the Tulsa Police Department fighting the Seventh Kavalry. This is a pretty good story on its own merits, propelled by excellent performances from Regina King, Don Johnson, Tim Blake Nelson, Yahya Abdul-Mateen II and Louis Gossett Jr., and examines themes of racial inequality, bigotry driven by externalisation and police authoritarianism. As the story unfolds we also spend time with a mysterious character played by Jeremy Irons relaxing at a country house with some servants, which feels like a huge non-sequitur until the stories begin converging.

In the second half of the series the Kavalry storyline dovetails back into elements of the original Watchmen narrative, as we learn more about the backstory of the Minutemen and also what happened to Dr. Manhattan after the events of the original series, culminating in the episode A God Walks into Abar, easily the season's strongest episode and a callback to the original comic sequence where we see Dr. Manhattan's creation. Events culminate in a grand finale which feels distinctly true to the story's comic book roots, even down to the somewhat ambiguous ending.

Watchmen (the TV show) is a reasonably strong and effective work. It is clearly the work of the more restrained and thoughtful Lindelof who worked on The Leftovers rather than the self-indulgent and trite one who worked on Prometheus and J.J. Abrams' Star Trek films. The tone of the series walks a careful line - not dissimilar to the original comic book - of developing weightier themes and ideas whilst also remembering that it is a comic book story, with a more colourful ending. In this sense it is both a deconstruction and a celebration of comic books, rather than a cynical deconstruction alone (as Amazon's recent series The Boys is). Threading this particularly needle is not easy and it's impressive the show ends up as accomplished and well-judged as it is.

There are a few problems, particularly with character set up. It feels like the Lady Trieu storyline was not set up well enough in earlier episodes, meaning it feels a bit odd when this story assumes prominence towards the endgame. The Veidt story is entertaining on its own merits, but its psychotic comedy of English manners feels tonally disjointed compared to the rest of the series, but overall it adds variety to the story.

The Watchmen TV series (****½) (which feels like now it should really have been given a distinct title) is accomplished television. It's superbly well-acted, mostly well-written and manages the difficult balancing act of introducing new elements to this world whilst also picking up on story elements left behind from the original and addressing them. Combined with a haunting score by Trent Reznor and Atticus Ross, it makes for impressive viewing. The series is available now in the UK and USA, as well on HBO's streaming services in the United States.
Posted by Adam Whitehead at 16:18