Published in 1986-87 as a 12-issue mini-series, Watchmen is the most critically-applauded graphic novel of all time. The comic industry's answer to Citizen Kane, this is a complex, literate story that belies its premise and makes maximum use of its medium to deliver a story that couldn't be told any other way (although the forthcoming movie adaption promises to have a damn good try). As well as its impact on comics, Watchmen is one of the defining modern works of science fiction (winning a Hugo Award in 1988), and was rated as one of the one hundred most important novels of the 20th Century by Time Magazine. 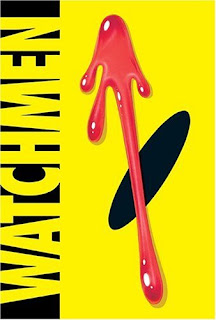 The book opens in 1985 with the murder of Edward Blake, a government-sponsored crimefighter who worked under the alias 'The Comedian'. A masked vigilante known as Rorschach investigates. Rorschach, the Comedian and a number of other 'superheroes' fought crime together until the 1977 Keene Act outlawed heroes unless they worked directly for the US government. Most of the heroes retired, but Rorschach turned vigilante. Apart from the Comedian, the only hero left in government employ is Dr. Manhattan. Unlike the other heroes, who are simply well-meaning ordinary people, albeit with superior mental or physical training, Dr. Manhattan is the real deal. In 1959 an experiment with intrinsic field theory went catastrophically wrong, disintegrating Dr. Jon Osterman and transforming him into a being with total mastery over matter.

Rorschach continues to investigate the crime, but tensions are rising between the United States, led by President Nixon (serving a fifth term of office after the mysterious deaths of two Washington Post investigative reporters in 1971), and the Soviet Union. With the nuclear doomsday clock ticking ever closer to zero and other retired crimfighters either being killed or attacked, it falls to a select group of people to try and discover who or what is driving the world towards destruction.

It's a classic set-up, but you might argue not a revolutionary one. The trick is in the details. The world of Watchmen, which is on one hand close to that of the 'real' 1985 and on the other totally different, is meticulously constructed with every logical ramification of the existence of a genuine superhero pursued to its end. Thanks to Dr. Manhattan's scientific genius, the world is largely pollution-free, thanks to cheap electric cars and clean airships that provide international transport. Unfortunately, Manhattan's role as a nuclear deterrent and his assistance in helping the USA win the Vietnam War in just three months has also encouraged American imperialism and belligerence, slowly pushing Russia into a diplomatic corner from where it may feel it has no choice but to lash out. The other 'superheroes' are just ordinary people who like to dress up and fight crime, but largely they come to realise that their efforts are for nothing, since they cannot fight the underlying social and economic conditions that are the breeding ground for petty criminals.

As well as the characters involved in the story itself, the narrative spins backwards in time to investigate the prior generation of heroes and what role they are playing in events, and also encompasses a number of ordinary people on the streets of New York City who are witnesses to events: a newsstand vendor and his most regular customer, a young man obsessed with a pirate comic called Tales of the Black Freighter (which acts as a commentary and reflection on the main narrative, whose author plays a minor role in the story); a criminal psychiatrist driven to despair by his patients; and a homicide detective whose investigation of the Comedian's murder threatens his own career. It's a vast, dizzying web of storytelling with each storyline interconnected with many of the others in surprising and revelatory ways, and a commentary on superheroes and their psychology, capitalism, world politics and the morality of war.

As well as Moore's astonishing script, Dave Gibbons delivers excellent, detail-filled, rich artwork which captures the nuances of the story perfectly. Rereading the book, the reader discovers more details, more clues to the story that they missed on a first reading.

Watchmen (*****) is, twenty years after it was first published, still as astonishing, readable, entertaining and thought-provoking as ever, and still stands at the very apex of its approach to storytelling. The graphic novel is available from DC Comics in the UK and USA. A special edition of the comic book, Absolute Watchmen, featuring production notes and a new, clearer reprinting of the artwork, is also available in the UK. A movie adaption, directed by 300's Zack Snyder, is currently in post-production and will be released in March 2009. A trailer (set appropriately to the Smashing Pumpkins' 'The Beginning is the End is the Beginning') can be found here.
Posted by Adam Whitehead at 17:18

This is one of my favorites. I hated the wait between issues when it was originally published. I prefer reading it as a novel.

I was glad to spot this one in the list. It deserves 5 stars in red all day long :)