The United Federation of Planets is faring badly in its war with the Dominion and seeks to bolster its chances through an alliance with the Son'a, who require resources that are only available on a remote planet. The Federation agrees to help move the indigenous population so the Son'a can seize these resources. However, a malfunctioning Lt. Commander Data exposes the Federation presence, triggering an inadvertent first contact situation. Captain Picard and the USS Enterprise arrive to retrieve their errant officer and uncover a much more complex situation is unfolding, one that endangers the very morals of the Federation. 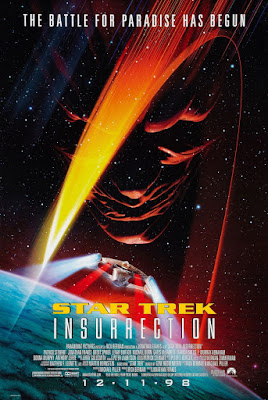 After the enormous success of First Contact, a darker action movie, Paramount decided that the next Star Trek movie should be lighter in tone. Michael Piller, renowned for writing many of the finest episodes of Trek, was called in to write a script that could serve as the "first-ever Star Trek date movie," a request that was...dubious at best. Paramount wanted a film that was closer in tone to The Voyage Home, with light comedy and a warmer feel, rooted in the character relationships.
What they ended up with was a two-hour episode of Star Trek: The Next Generation. Not Yesterday's Enterprise or The Inner Light Next Generation, but one of those middling Season 5 episodes that is absolutely fine but you completely forget it exists until you bump into it on a full series rewatch, mildly enjoy whilst it's on and immediately forget about the second it's over.
The film starts off well with some solid humour as Picard and Worf (whose presence in the film despite being on Deep Space Nine as a regular character at the time, is briefly but effectively explained) have to gather up the errant Data by using Gilbert and Sullivan songs to distract him. The story then gets into a moral quandary as the Bak'u not only don't want to be removed, but might well die if they are moved. Since they are not native to the planet, the Prime Directive doesn't strictly apply, although basic morality does. However, the Son'a are also suffering from their own problems, which the planet holds the key to answering.
What could be a really thorny moral quandary is let down almost immediately by portraying the Son'a as repulsive in both appearance and morals, with their leader Ru'afo (a fine, scenery-chewing turn by F. Murray Abraham) being ruthless, amoral and prone to using violence as his solution to all problems. So the Enterprise crew siding with the Bak'u is pretty much a given from the start of the film. Also, the film suggests that the Enterprise crew are really going out on a limb by risking their careers to help the Bak'u, but it's more the case that the Starfleet Admiral helping the Son'a is going off the reservation by himself, so the "insurrection" of the title never really gets going.
As I said, the film is fine. It has some spectacular scenery, a few good set-pieces between the recovery of Data's shuttle and the space battle between the Enterprise-E and the Son'a in the nebula, and the supporting cast is all solid with none of them being spectacular. But the film bogs down with technobabble. The tension between the transporter inhibitor defences and the attacking Son'a drones is weak, at best, and the film never really adequately explains why the Federation are so keen to ally with the Son'a, who seem to be a small civilisation of limited use in the war with the Dominion (which gets several mentions at the start of the film and is then dropped immediately, which seems odd).
Star Trek: Insurrection (***) continues the curse of the odd-numbered Star Trek films by being, well, not terrible, but certainly inoffensive. Some reliably solid performances by Patrick Stewart, Brent Spiner and the rest of the cast fail to make up for a film that's simply blandly forgettable.
Posted by Adam Whitehead at 22:30

I wish I had the space here to have an actual discussion about this, because I disagree on several points. Suffice to say for now that this is the only film in the series that a) actually embodies everything Star Trek is supposed to be about, and b) can be enjoyed without ever having seen any of the other episodes or films. I won't say the film has no flaws, but its easily the best in the series.

Sometimes your quibbles are real headscratchers. There’s a whole discussion between Picard and Dougherty about why the Federation is so keen on these guys, even making a comparison with the Romulans to drive home the point. Dougherty himself (Anthony Zerbe) never gets near enough attention for what he adds to the film. He’s another Bad Admiral, but he’s basically boss level Bad Admiral. There’s no comparison until Marcus in Into Darkness (another villain who gets dismissed too easily, mostly because observers are tripping all over themselves to make sure everyone still knows Wrath of Khan is better).