Brother Brutha of the Church is a devout believer in the Great God Om, in whose name the Omnian Empire has scythed a bloody path of conquest across the continent. The only problem is that he is the only devout believer left of the Great God Om, which Om believes is the reason he has been incarnated and imprisoned in the body of a small tortoise. Still, with Brutha's help he hopes to reclaim his former place of glory. The only problem is that Brutha has no idea how to accomplish this, not in a theocratic empire where genuine faith is seen as a threat... 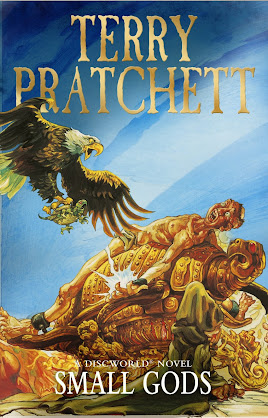 By the early common wisdom, Terry Pratchett's Discworld series was a series of amusing comic fantasies parodying other genre works and then facets of everyday life, like the movie business, law enforcement and shopping malls. More serious topics had started appearing in the series, but only as an underlying theme.

With Small Gods, published in 1992, Pratchett took the more serious ideas he'd been rummaging around with, put them up front and centre, remembered to bring a moderate number of laughs, and wrote arguably his masterpiece*.

At its core, Small Gods, from its first page to its last, is a lengthy, sustained and inordinately clever examination of religious fundamentalism and blind faith and their conflict with reason, argument and science. And you barely notice, because the story itself is extremely taut, well-told and brilliantly characterised with Pratchett's occasional bursts of silliness kept to a minimum in favour of flashes of wry and at times angry humour. Small Gods is a book that both argues for the importance of personal faith and piety and vehemently against people using their religious beliefs to impose fear, pain and death on others.

Small Gods has the veneer of being just a traditional Pratchett book: there's some jokes about men in togas arguing pointlessly about philosophy (in a world where it is difficult to ask, "Are the gods real?" when a lightning bolt will come flying through the window five seconds later with a label attached saying, "YES"), Death has a couple of cameo appearances and there is a running joke about tortoises being nice to eat. But you can tell the subject matter really got Pratchett riled up. His hatred of blind faith and the idea that setting fire to people is okay because an old book says so - even when, strictly speaking, it doesn't mention it - really comes through in this novel, but in measured tones. There's also a whole bunch of other things that clearly got Pratchett's goat up, with Flat Earthers (here cast as those believing the objectively flat Discworld is a sphere, because of irony) also having a hard time of it on the sharper end of Pratchett's wit.

Character-wise, Small Gods may be Pratchett's strongest novel. Being something of a prequel to the rest of the series, most of the cast does not recur elsewhere (Death and a very brief trans-temporal appearance by a certain simian book-collector aside), but Pratchett still has time to paint them in impressive detail. Vorbis may be one of the scariest antagonists in the whole series. Brutha is certainly one of its most interesting protagonists. Om's pragmatic, tortoise-meets-deity outlook on life is amusing. Even minor characters like Didactylos and would-be rebel leader Simony are well-rounded and given good rationales for what they do.

Almost as importantly, the ending does not suck. Pratchett had a patchy record with endings in the early going of the series, with his books sometimes ending okay and others being a bit of a let-down after a strong start and middle section. Small Gods, however, has a fantastic ending, starting with possibly the biggest belly-laugh out of all forty-one books in the series and proceeding from there. Intelligent but never preachy, philosophical but never boring, Small Gods (*****) is Terry Pratchett's masterpiece (okay, one of his masterpieces). It stakes a credible claim to being the strongest Discworld novel and maybe the best thing he ever wrote, and if I had to recommend just one Discworld novel for someone to read, it would be this one. The book is available now in the UK and USA.

*Although, a decade later, Night Watch would have serious words about that, and Nation a few years later.

I previously reviewed the novel here.

I have collected many Pratchett books over the years (including most you've reread and reviewed recently) but have yet to read one. Would you recommend reading them in publishing order as you are doing with these reviews, or can I start out with a book like Small Gods?

Nation absolutely had the trappings of being a masterpiece, but the book lost it somewhere on the way. Probably when it stopped being about Mau and the island society, and started being about whether or not Daphne was in the line of succession to the English throne, interspersed with some kind of Dawkins fanfiction. I guess it's the curse of having been written after Pratchett's actual masterpiece, Night Watch.

Totally agree, I would add that Small Gods has by far the strongest opening sentences of any novel Pratchett ever wrote...