1899. The Van der Linde Gang are a group of thieves and outlaws bound together by a loose code of honour and loyalty to the gang's founder, the charismatic Dutch van der Linde. The Gang are forced to flee the town of Blackwater, West Elizabeth when a job goes badly wrong. Regrouping east of the Grizzly Mountains, they resolve to lay low, make some money and find a way to escaping to a better life. But Arthur Morgan, Dutch's most trusted lieutenant, worries that the age of the wild west is ending and there may be no way back to the life they once knew. 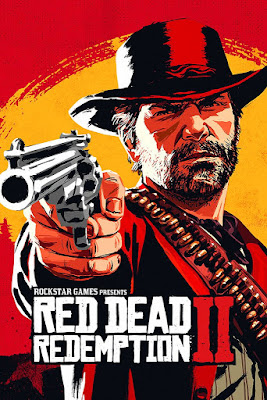 For twenty years, Rockstar Games have pursued their vision of creating the perfect game. To them, that game would take place in an open but reactive world affording the player immense freedom to go wherever they want and do whatever they want, with other characters reacting realistically, whilst there also being a rich, in-depth and gripping narrative to follow. The perfect Rockstar game would be a title that combines the freedom and responsiveness of the best roleplaying games with the best cinematic action that Hollywood has to offer and everything tied together with incredible production values.

Red Dead Redemption 2 isn't the perfect Rockstar game but that's not for want of trying. It's a game that is jaw-dropping in looks, ambition and its narrative and thematic goals, which looks at the weaknesses of previous Rockstar titles and tries to solve them whilst building on the areas where they have always been strong. Most tellingly, for a company that was always previously proud to set the agenda, the game has cleverly sampled the strong DNA of other open-world, epic titles like Skyrim and The Witcher 3: Wild Hunt, borrowing ideas and mechanics to strengthen its own identity.

As with almost every Rockstar game since Grand Theft Auto III (2001), Red Dead Redemption 2 is set in an expansive open world where you can travel at will (apart from a few locked-off areas which open up later on) and do what you want. Playing Arthur Morgan, a trusted lieutenant in the Van der Linde Gang, you can follow the game's main storyline, a sprawling and labyrinthine story of betrayal, murder, mayhem and camaraderie, or a titanic number of optional activities. These range from hunting and fishing to roaming the landscape looking for people in trouble to help (or rob), to truly oddball tasks like helping a palaeontologist find dinosaur bones and helping an odd stranger find mystical rock carvings. 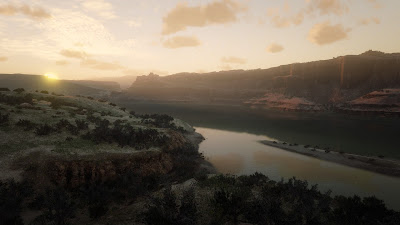 Along the way, you meet a colossal number of characters and earn the enmity of dozens of enemies. The main story is - easily - Rockstar's best to date, severely restricting the satirical humour of the Grand Theft Auto series in favour of a more authentic tone. That's not to say that Red Dead Redemption 2 lacks humour, but a few outliers aside (like a storyline following a Nikolai Tesla lookalike's quest to harness lightning for a scientific project), it's a more grounded and genuine sense of humour rather than wacky hijinks. The story is rooted in characters, with Arthur able to interact with all of the other members of the twenty-strong Van der Linde Gang (including women and children). All of the characters are painted in at least something approaching depth, and its interesting to see how minor, almost background character features (like Mary-Beth's love of writing) come back later and develop over the course of the game. The game also features some of Rockstar's best female characters to date, such as the gunslinger and eventual bounty hunter Sadie Adler, an area where they have traditionally struggled in the past. Arthur himself is probably the most three-dimensional protagonist the studio have ever developed, with more richness and depth to him than all three of Grand Theft Auto V's playable characters combined.

The story muses on the theme of the dying West and the impact that has on the nascent American Dream. Dutch himself is a proto-libertarian, decrying government interference in the affairs of the little man, although he's also something of a hypocrite, ruling his gang with kindness and charisma until someone disagrees with him, when an uglier side emerges. Arthur is loyal to Dutch beyond a fault for looking out for him for twenty years, but as the game continues and the gang's fortunes vary, he begins to question his own path. In terms of theme and tone none of this is new to Rockstar, but they've never executed it with this much richness and panache before. You may be able to see almost every story beat coming before it does, but that doesn't stop it being immensely enjoyable to unfold.

The more serious tone helps, but also so does the tonal variation. Red Dead Redemption 2 feels like it's trying to be every kind of Western ever made, from the gritty realism of Unforgiven to the sprawling, literary observations of Deadwood to the pulp fun of the spaghetti Western era, as well as (in an intriguing, mostly self-contained storyline) a possibly Waltons-influenced home-building story, and to its credit it pulls off most of these shifts in narrative quite well. 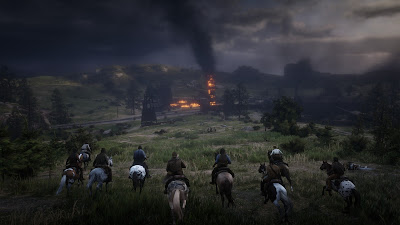 The world the game unfolds in is also astonishing. It's huge, incorporating five fictional American states based on Colorado, Louisiana, New Mexico, Texas and Mississippi, and its biomes range from midge-infested bayous to snow-capped mountains to verdant woodlands and dry, open deserts. The game walls off a full third or more of its extent until you've pretty much completed the entire main story and half of the "epilogue" section, which is by itself longer than most games in their entirety. You can explore this world on foot, on horseback or by steam train. Boats are available although, in a surprisingly cheap move from Rockstar, they tend to sink the second you think about heading beyond the map's borders, to the point where they're a liability to use. It feels like Rockstar could have taken a less artificial approach here in keeping players within the game world (especially since sinking more than a few yards from shore is a death sentence).

The world is also packed with detail, to a degree that borders on the insane. The game generates wild animals, from birds to rabbits to mongoose and crocodiles, around you based on the terrain and then has them emit their correct noises. Fire your gun and the forest goes silent because the game has told every animal in the vicinity to go silent or run away. The level of detail extends to the human characters, every single one of whom you can talk to (although most have little to say).

The favoured way of getting anywhere is by horse, and to Rockstar's credit they have gone to some lengths to make these more than just 19th Century motorbikes. You can bond with your horse by treating it well and looking after it, which leads to bonuses like being able to summon your horse to your side over great distances and use it to store your increasingly massive arsenal of weapons and equipment. As your bond increases, your horse becomes tougher and less likely to die, which is good because this is a major hassle. 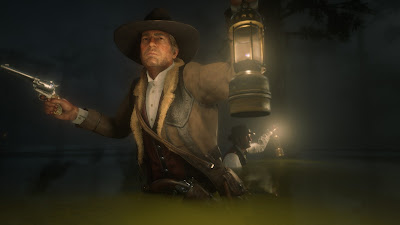 Combat is one of the game's cornerstones, although it is perhaps somewhat less prevalent than in other Rockstar games. Combat is largely unchanged from Grand Theft Auto V, in that it is serviceable and more than a little easy, especially given the addition of a "Dead Eye" mode which slows down time in fights. Rockstar's commitment to realism means that headshots will kill everyone with one hit, even with the weakest weapons in the game, which makes fighting (especially on the PC version, with its mouse-driven precision aiming) distinctly unchallenging.

The game's biggest weaknesses are threefold. The first is technical. Whilst playing Red Dead Redemption 2 on PC, I had more than a dozen crashes to desktop. These were spread over a period of some 70 hours (about 62 hours completing the main story and most side-missions, and another eight or so of optional activities) but it was still rather annoying. The second is that the UI is so cumbersome and unwieldy as to be aggravating. Selecting absolutely anything through the radial menu system is awkward and the inability to bind commands straight to keys (so you just hit a single shortcut key to set up camp rather than going through two separate menus first) is frustrating. The game's commitment to realism also strays too far into pedantry. More than once I jumped off my horse to run into battle to find I only had a weak pistol on me because I hadn't pre-selected two other weapons whilst still on my horse. More annoying was when I did pre-select these weapons but the pre-mission cut scene somehow made the game forget this, leaving me under-armed for the task at hand. 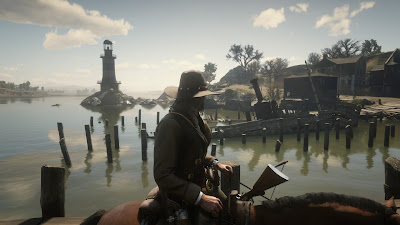 The biggest problem remains Rockstar's key weakness, which has impacted on all of their games going back to the 1990s: an inability to allow players to play missions how they see fit. Rockstar have created this immense, beautiful world and given the player the freedom to do what they want in it, but the second a mission starts the player's choices are removed and they are forced, on pain of insta-fail, to do the mission exactly how Rockstar want them to do it. The game has a nice stealth system which you almost never get to use, because most missions devolve into full-on gunfights in a cut scene beforehand. In some missions you are even given a specific weapon to use, sometimes causing you to lose the one you pre-selected (most annoying when my top-line sniper rifle was lost because another character forced me to use an inferior sniper rifle for the exact same mission). Ludonarrative dissonance - the gap between the game's story and the player's actions - has always been a bit of an issue in Rockstar games but the jokey tone of the GTA series has always overcome it. Here, in this grimmer and grittier world, it's more jarring than ever before.

Ultimately the lack of player agency in missions or in how they can affect the story makes Red Dead Redemption 2 less of an enjoyable sandbox than its peers. RDR2 gives it much more of a run for a money than I expected, but ultimately The Witcher 3 emerges victorious as the superior open-world game for its greater embracing of player freedom. The clunky interface, constant cut scene interference in the story and technical problems also contribute to occasionally make RDR2 more of a chore than it should be. But its unsurpassed graphical beauty, rich soundtrack, compelling and memorable characters and its remarkable sense of place and atmosphere cannot be faulted.

Red Dead Redemption 2 (****½) isn't the perfect game that Rockstar have been striving to make for twenty years, but it's far closer than they've ever reached before and, despite a myriad number of aggravating faults, it's an impressive and compelling game experience. It is available now on PC, X-Box One and PlayStation 4.
Posted by Adam Whitehead at 18:34