With TV and film projects being suspended globally at a rate of knots in reaction to coronavirus, it's interesting to see the response from the video game industry. Poland's CD Projekt Red, who's forthcoming science fiction RPG Cyberpunk 2077 is the most eagerly-awaited game of the year, have revealed how they are tackling the issue via a public announcement on Twitter. 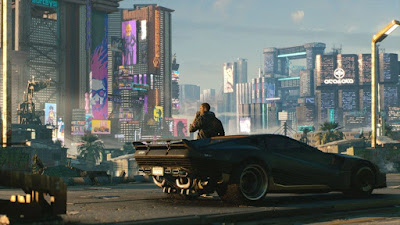 CDPR have switched to a fully decentralised, work-from-home ethos where developers will remotely log into servers to access the latest build of the game and provide updates, bug-checking and polish.

It should be noted that Cyberpunk 2077 is functionally complete: it was originally due for release in April and CDPR have noted they could still hit that date if they didn't mind releasing a buggy game, which they do. The bulk of the work left on the game at this stage is bug-testing, polish and a last round of work to make sure that the game releases in as perfect a condition as possible. Whether it is possible for a company like, say, Bethesda or Rockstar (who are hip-deep in developing multiple games, including Starfield, The Elder Scrolls VI and the rumoured Grand Theft Auto VI) to do the same thing much earlier in their games' development remains unclear. 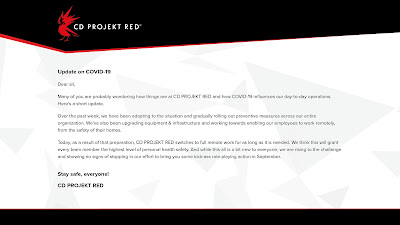 That said, CDPR also confirmed recently that they are working on a new Witcher game which is much earlier in production, and presumably work on that game will also continue in this remote fashion.

The video game industry has flirted with remote working and decentralised production for years, with many small mods and indie projects being developed in such a way. However, forcing new employees to relocate to the company studio's physical location and attend in person has been the norm in larger studios for decades. It will be interesting to see if this adaptation becomes a permanent trend.
Posted by Adam Whitehead at 16:21