The AIs who control the world have decreed the destruction of Zion, the last free human city. As a vast army of Sentinels digs towards Zion, Neo must use his developing powers to help end the war from inside the Matrix. A message from the Oracle leads him towards a meeting with the Architect, whose revelations will change everything. But both sides in the war have reckoned without a wild card, the return of a program that should have been destroyed but has instead gone rogue and started spreading like a virus with only one purpose in mind: the end of everything. 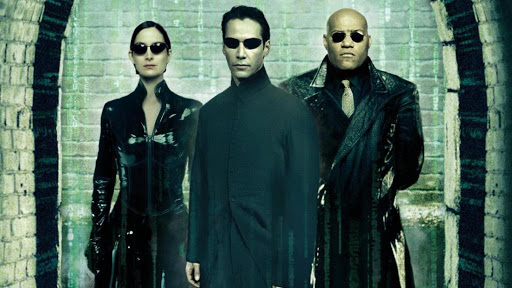 It took four years for the Wachowskis to deliver their sequel to their 1999 paradigm-shifting action classic, The Matrix. As they developed ideas for the project, they realised they couldn't fit them into one movie so split it in two, with the two halves released six months apart. All the cool kids were doing this back in 2003, with Peter Jackson filming his three-part Lord of the Rings adaptation in one block and then releasing the films at one-year intervals. This was a huge success. The Matrix sequels had a rather more mixed reception.

The Matrix Reloaded does do a few very good things. The action scenes are stronger, the actors having trained for far longer and more in-depth for their martial arts scenes. There's far more spectacular stunts (the opening sequence with Trinity single-handedly destroying an office block and then engaging in aerial combat with an Agent remains outstanding), more worldbuilding, huge plot revelations and some clever ideas sprinkled amongst the action, although the philosophising of the first film has mostly fallen by the wayside.

Unfortunately, the film's good elements are dented by the fact that the pacing is poor. The Matrix Reloaded has a fairly simple plot progression: Neo has to meet with the Oracle, strike a deal with the deceitful (and randomly French) Merovingian and then follow a path to meet the Architect, whilst fairly nascent subplots follow a rivalry between Morpheus and Zion's military commander and the gathering of Zion's forces to oppose the machine army. This could easily have been done in under 90 minutes with plenty of time for cool action scenes, but for some reason the Wachowskis decided they had to use every single penny of the budget (twice that of the first film). As a result we get an absolutely absurd fight sequence between Neo and several hundred Agent Smith clones, which the technology is not quite able to deliver: the all-CG scenes between a blatantly fake Keanu Reeves and lots of claymation-looking Hugo Weavings are particularly painful. Even more offensive, because it is simply not important to the plot, is a hallway fight scene between Neo and the Merovingian's mediocre bodyguards which feels like it goes on longer than the Hundred Years' War. There's also a rave/dance party in Zion near the start of the film which feels a bit pointless (although prefiguring the Wachowski's love of showing people having a good time, which would inform their later Netflix project Sense8).

Other action sequences also go on a bit too long, but they are at least a lot more varied and fun: Seraph and Neo's first meeting taking the form of a friendly table-based martial arts battle is as daft as a brush, but so technically impressive that it's less of a problem. The massive battle sequence on the freeway is also a bit bloated, but it has a lot more combatants and is very impressively handled. There's also some nice character beats, such as Morpheus - who's clearly been trained up by Neo and his new powers in the meantime - relishing the chance to go toe-to-toe with an Agent on more event terms.

The film was heavily criticised for the revelatory sequence with Neo and the Architect. Partially I think this was the fault of the extended gap between the films, during which time fans had come up with all sorts of theories on the Internet, some of them fairly compelling. The most constant and pernicious of these was that the "real world" was another level of the Matrix, and a lot of people were unhappy this wasn't the case. Personally I was relieved, because I think the Wachowskis would have lost the mass audience if they'd gone too wankery with the premise (in the event it would be another decade before Christopher Nolan played that card, more or less successfully, with Inception). And as it turns out a lot of the fans were right, the real world situation was another layer of control, just not in the way they were expecting. Still, I think the problem with the scene is, both ergo and concordantly, more in its presentation than the plot revelations it contains.

The film also has another problem: bits of it are missing. The Wachowskis wanted to make The Matrix Reloaded a genuine multimedia experience™, with synergy© between different franchise brand products™. The result is that to get the best out of the movie, you need to have watched the animated short film collection The Animatrix and played the video game Enter the Matrix beforehand. Which obviously about 99.5% of viewers had not done (and, seventeen years after release, doing either is a bit difficult with The Animatrix not being available in all territories and Enter the Matrix not being playable on modern systems, not that you'd want it to be; it's not a good game). As a result, references to the final mission of the Osiris or the Logos crew and Niobe being constantly treated as a big deal when they're missing from most of the film feel a bit weird.

Still, the film does a lot that's right. The Wachowskis realising that they had a gift that would not stop giving in the form of Hugo Weaving and making 1000% use of him in the sequels was a good move. The expansion of the world and the cast is mostly successful and the action sequences and effects are technically impressive, until they become over-egged and self-indulgent.

The Matrix Reloaded (***) is a watchable, sometimes fun but overlong, overwrought and over-budgeted sequel to a great movie. It does a lot that's good and is never less than interesting, but with more judicious editing it could have been sharper, tighter and more compelling. The film is available as part of a box set with its predecessor and sequel in the UK and USA.

Email ThisBlogThis!Share to TwitterShare to FacebookShare to Pinterest
Labels: the matrix, the matrix reloaded, the wachowskis

I actually like the Architect scene and the Merovingian. Over the top dialogue has always interested me from B5 to Firefly to Deadwood to GRRM. I wish more content creators would take risks in this area. But the world building of the real world in the Matrix is just terrible. I can't willingly suspend disbelief in the last,underground human city with the religious name and travel via hovercraft. I appreciate your pointing out some of this is explained outside the films, but without that I see a lot of contradictions and things that don't work. It's very hard to understand how you can have a whole city of people who were laboriously unplugged from the Matrix and taken deep underground while the machines are always at the point of wiping humanity out.

That is explained in the film. The machines themselves founded Zion and put the original 23 human settlers there themselves, and allowed Zion to survive. Most of the people in Zion also appear to be born there, not rescued from the Matrix. Every 100 years or so, the machines trigger the One programme, which results in the Matrix being rebooted before the systemic failure in the Matrix reaches exponential status. The machines need to pretend this is the first time the Matrix has been existed, so they also wipe out Zion, and then re-settle it with a new founding group of 23 people. Before Neo, this happened five times in succession.

The machines always know where Zion is and can destroy it at will, they just choose not to because if they did, the One programme would not be able to operate as freely as they need it to before it returns to the source and reboots the system.

Responding to Werthead's above comment: I also got the impression that when Zion's population reaches a quarter million, it reaches a certain...threshold size, at which it might start posing a serious threat to the Machines. So they cull it before it can get big enough to ever be a serious threat.

Retroactive analogy: sort of like how the Reapers in Mass Effect always wipe out galactic society just as its on the cusp of developing true AI (give or take a few centuries, on the scale of 50,000 years).....BUT that "this cycle is different" because the Protheans managed to shut down the Citadel's signal...thus the Reapers are "late" for this cycle, so the galaxy has the glimmer of hope that no other cycle ever advanced as far technologically as they have. In the case of the Matrix, "this cycle is different" because Neo chose NOT to go along with the massacre (and his actions inadvertently created Virus-Smith, which is screwing up the Machines on is own).

I greatly enjoyed Matrix Reloaded, and even thought the Architect scene was brilliant. The editing could have been better, but the fight scenes were so good I didn't care if they went on a little long.

My only real complaint is that the CGI in the "Burly Brawl" between Neo and 100 Smiths wasn't quite up to task. But given that I also watch cartoons, I can still enjoy the innovative fight choreography in it. I just wish it was better.

I was always startled at just how much vitriol was thrown at this movie; I was watching it FOR all the philosophy references and they were still in there.

....Matrix Revolutions was the one that had actual problems in it, which with the distance of time really just amounted to "Trinity's death scene was too drawn out".

I agree that the main problem of the movie is pacing. The second problem, in my mind, is Zion. What's cool about the The Matrix - the first movie - is the Matrix itself and what goes on inside of it. By focusing on Zion, which is outside of the Matrix, and the cliche "save humanity" plot, the movie slides away from its coolest and most distinctive feature. The best parts of the movie - the opening sequence, the freeway battle - take place within the Matrix and are decidedly cool. Zion scenes, not so much.

Thanks for explaining that. You're right, that's all there in the Architect's speech,but he is less clear. How then does Neo (a person in a tank) become the One, a program created by the machines? I've never tried to think it through rationally before. I just treated it as prophecy.

All the humans in the Matrix are grown in immense farms before being plugged into the Matrix. I assume at a certain point, when the system needs it, it downloads the One program into one of the created humans (in this case Neo). One theory is that the One is in fact the same genetic template each time (i.e. Neo is a clone of himself) so in both past and future iterations of the cycle, they could have Neo and Trinity around but they're not the same Neo and Trinity as in the original trilogy. Although I think that would veer into the "too confusing for the mass audience" side of things.