THE STAND mini-series to hit screens in December

The latest adaptation of Stephen King's classic horror novel The Stand is due to start hitting TV screens on 17 December. 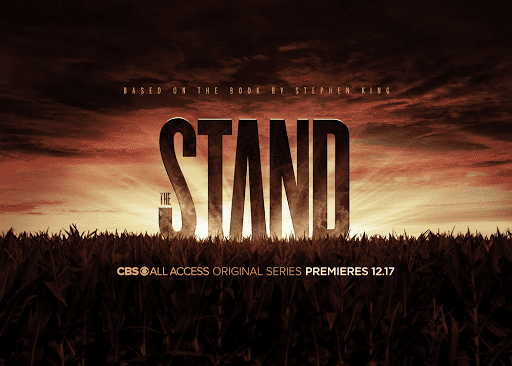 The Stand, originally published in 1978 but thoroughly revised in a second edition in 1990, tells the story of a global pandemic known as the "superflu" (also "Captain Trips") that wipes out more than 90% of the world's population. The American survivors are gathered into two camps, each offered guidance by a mysterious figure, one good and one evil, before they are forced into a final confrontation for the soul of humanity.

The Stand is one of Stephen King's two best-selling novels, a position it seems to alternate with It.

The new version of the story - the second, following a successful 1994 ABC mini-series - will debut on streaming service CBS All Access. Consisting of ten episodes (released weekly), it makes several changes to the story, approved by Stephen King. The first is that the story will start in the post-apocalyptic timeframe and will then flash back to events before the superflu. The second is that the infamously-criticised ending has been changed and revised by King, with an extensive new coda added. King himself has written the final episode of the new version to oversee these changes personally.

The new version of The Stand does not have an announced international partner as yet, although based on previous CBS All Access deals it is likely to air in the rest of the world via Netflix or Amazon Prime.

My sister and girlfriend LOVED the older series. Let's hope this one can top it! =D

Marilyn Manson as the TrashCan man? I've seen that rumor out on the interwebs.

I really didn't like the original mini-series, thought the book was much better...they cut out too much stuff to make it TV friendly.

Loved the older series...would love to see this one but unfortunately.....do not have internet or the means to see this newer version. I'm disappointed that it will not be showed on regular television....I do miss the tv mini-series. And CBS would do it properly....guess I will have to see it on a rerun or if sold on DVD.... otherwise...Unable to view it !! I do like an good Stephen King Movie !!!