For Gordon Freeman, it's just another day at work at the Black Mesa Research Facility. At least, until portals to another dimension open up, depositing hostile creatures into the facility and overloading its power systems. Equipped only with his Hazardous Environment Suit and a number of mundane and experimental weapons, Gordon must fight his way to the Lambda Complex, overcoming aliens and a secret US marine force sent in to restore order...and eliminate witnesses. 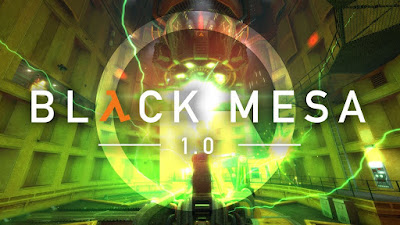 Black Mesa is a fan-made recreation of classic first-person shooter Half-Life (1998), made with the approval of original developers Valve Software. The game was previously released in 2012 (my review here) after eight years of development, but was missing the final chapters set in the mysterious alien world of Xen. After a further eight years of development, the Xen chapters have been added and the rest of the game overhauled and given a shine. It's now possible for players old and new to enjoy the full Half-Life experience from beginning to end.

The question is how the game holds up, and the answer is remarkably well. The Source Engine is getting on a bit and early chapters of the game do feel a lot more dated than they did eight years ago, especially character models. The outdoor areas also feel like they could do with a bit more of an overhaul, with lighting effects and distance views feeling distinctly under-par, although not too bad. 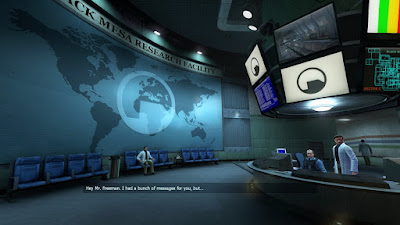 Luckily, for the most of the game you're fighting alien monsters in relatively tight confines, and then enemy soldiers in larger and more elaborate areas and for this the graphics are more than adequate. Half-Life's prize assets, in its sense of pacing, location and level design, remain intact and improved upon. Enemy AI also remains formidable, especially for the soldiers, and combat is still ferocious and fun without getting bogged down with modern frippery like cover systems and regenerating health. If you enjoyed Black Mesa's original release in 2012, you'll still enjoy the Black Mesa parts of this game and possibly even moreso. Some changes for the 1.0 release include slimming down several levels and making them shorter and leaner to improve the game's ferocious pacing, simplifying a few puzzles and generally making the experience tighter.

And then we get to Xen. 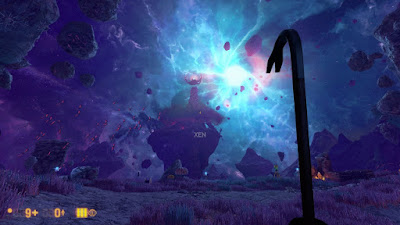 Xen has always been a millstone around Half-Life's neck. After fighting alien monsters in familiar surroundings (ordinary office rooms, industrial locations, warehouses), we take the fight to the alien homeworld, a collection of floating asteroids and moons linked by teleporters or long-range jumps. It worked okay in 1998 but some of the platforming jump puzzles were tedious and the unfamiliar visuals made finding the path forward a chore. The main thing in its favour was that it was short: from beginning to end Xen took maybe an hour to an hour and a half to get through, considerably less than the 10+ hours spent in Black Mesa itself.

Black Mesa's Xen has been radically overhauled. It looks graphically gorgeous, with constant, amazing vistas that look like they've jumped off a 1970s prog rock album cover. The soundtrack in this part of the game is also fantastic, with ethereal, haunting tunes. It's all very moody. 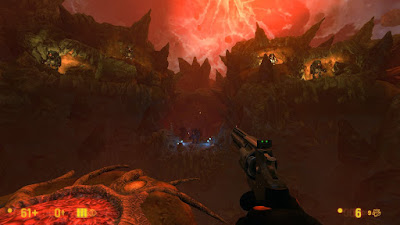 It's also now very long. Xen is more than twice as long as its 1998 incarnation and maybe closer to three times. The first half of Xen has been improved a lot with pacing and more focus on traversing larger environments through logical puzzles and ferocious combat, with a lot of the detailed platforming from the original release thrown out. There's even some new enemies, such as underwater barnacles that pull you down rather than up, and infant houndeyes which now explode rather than erupting sonic blasts at you. This part of the game is great fun, with a lot of thought that's clearly gone into how to make Xen better from a gameplay perspective whilst retaining its alien landscape and atmosphere. There's a few too many power cable puzzles in this part of the game, but nothing too outrageous.

Unfortunately, things get less impressive when the player encounters the Gonarch. The infamous pendulous mobile testicle monster was a horrific revelation in the original game, but a bit of a chore to fight. For some reason, the Gonarch boss fight has now been increased in length several times over, with Freeman playing cat-and-mouse with the creature through an underground cave network full of flaming gas traps and not-always-clear paths forward. Even worse, the Gonarch is completely indestructible until you finally corner it in its lair, but no information is relayed to the player to confirm this, meaning a lot of ammo is wasted before you can finally kill the damn thing. 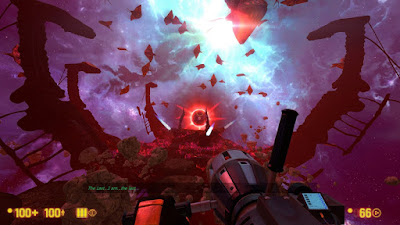 The section after the Gonarch is then mind-numbingly tedious. The sumptuous vistas disappear and Freeman instead spends what feels like ages clambering through narrow pipes connecting power cables together and trying to find the path forward, which becomes progressively more laborious (especially when the path forward is sometimes just blindly hurling yourself onto a conveyor belt or standing on the edge of a bit of scenery that looks more like a bug than a clear path forward). The only good point in this section is a sequence where Freeman apparently (it's a bit unclear) frees the vortigaunts from slavery, which much better sets up the events of Half-Life 2.

Things rally at the last hurdle: the battle against the Nihilanth is much more involved, with Freeman ascending on a huge lift through different environments home to various aliens that he must fend off before proceeding. The ferocious combat in this section makes up for the final boss fight, which was perfunctory in the first game and, though better in Black Mesa, still a bit too straightforward. 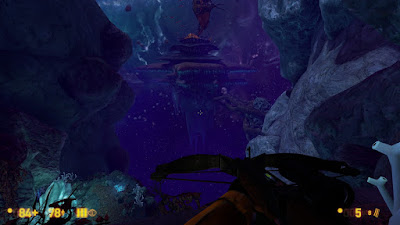 The addition of Xen makes Black Mesa functionally complete, but it also feels like it could have done with a lot more polishing and cutting. The sequence is far too overlong and doesn't add much to the game. In fact, condensing the time between the Gonarch and the Nihilanth (which in the original game were much less than half an hour apart) back to the original and streamlining out some of the more tedious forcefield and power supply puzzles is all that's needed to bring the game to perfection. Crowbar Collective have promised a Black Mesa 1.5 at some point which will bring all the graphics up to a much higher quality and iron out the problems, and I hope they considering making big changes to Xen to make it more worthwhile. I do wonder if they rushed Black Mesa 1.0 out of the door to tie in with the release of Half-Life: Alyx (a VR interquel set between Half-Life 1 and 2), which is due in a few days.

As it stands, Black Mesa 1.0 (****½, falling to *** for the final section after the Gonarch fight) is the best modern way of experiencing Half-Life, with most of the game now a crisp, fast-paced, action-packed shooter which still stands head and toes above the competition. I played Halo: Reach, reportedly the best game in that series, a few weeks ago and Black Mesa is superior on every front, from enemy AI and weapons loadout to level design and pacing. The first part of the Xen section is also breathtakingly impressive and enjoyable to play. The second half is much more of a chore, and drags down the game's overall quality. This is something that hopefully will be fixed in forthcoming revisions. The game is available now via Steam.
Posted by Adam Whitehead at 13:22