When it comes to the genre of first-person shooters, there have been several gamechangers during its lifespan. The mass-popularisation of the genre through id's Doom was an early one. The success of 2001's Medal of Honour: Allied Assault inspiring dozens of 'realistic' shooters using real weapons and history was another. But towering over all of them is Half-Life. Released in 1998 it transformed the genre from mindless shooting to something based more around characters, personal narrative, puzzles and full immersion in the world it depicted. 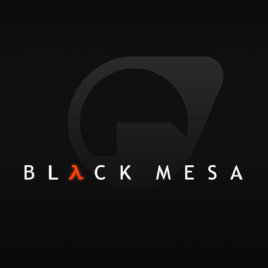 More recent shooters have seemingly ignored the lessons laid down by Half-Life, becoming lost in a few short hours of tiresome, badly-acted cut-scenes and even more tiresome gimmicks like regenerating health and cover systems. Yet returning to Half-Life, or introducing it to new players, is almost impossible. What was a fantastic-looking game on release is now a painful collection of blocky models and low-res textures. What is needed is a full HD remake of the game which preserves the pacing, weapons and enemies but updates everything else.

Happily, Black Mesa is a (nearly) full HD remake of the game which preserves the pacing, weapons and enemies but updates everything else. Created over a period of eight years (!) - or two years longer than it took for Valve themselves to make Half-Life 2 - by gamers and fans working in their own time, Black Mesa is a carefully-crafted love letter to the franchise. The attention to detail in the game is tremendous, and it's quality easily exceeds that of many 'proper' Triple-A releases. Even the voice-acting (all re-recorded, as reusing the original game's audio files was legally dubious) eclipses that of many supposedly professional games.

The game opens as the original Half-Life did, with you standing on a tram as it makes its way into the Black Mesa Research Facility in New Mexico. You play Gordon Freeman, a 27-year-old theoretical physicist and graduate of MIT. Freeman is a silent protagonist who never speaks, allowing the player to come up with his own personality and interpretation for the character. The iconic tram ride shows the similarities and differences between the original game and the remake. The areas you pass on the tram are more or less the same, but are now inhabited by more people with more activity going on. A mech clearing up a chemical spill have now been joined by two scared scientists trapped against a nearby wall. Other spaces, formerly bare, are now bustling with people moving equipment around. The reception area to the main lab has been transformed from a poky square room into a cavernous circular chamber filled with computer screens. A nearby canteen has changed from a small room with a table in it to a large public space filled with vending machines.

There are multiple models for scientist and soldier characters now (including the introduction of female characters), lending more realism to scenes where Gordon forms up a posse. Amusingly, Dr. Kleiner and Eli Vance (from Half-Life 2) show up as younger characters, in keeping with the canon. The developers have resisted the urge to thrown in other appearances from Half-Life 2 characters: Administrator Breen is referenced, but does not appear (as he did not appear in the original game), whilst Barney also does not appear: whilst multiple security guards in the original game had the 'Barney voice', the canon Barney is the one glimpsed briefly trying to open a door as Gordon passes by on his tram journey, and otherwise does not feature in the original Half-Life, only its expansion, Blue Shift.

The weapons load-out is the same as in the original game, and pleasingly you can carry a full arsenal around with you rather than having the current, tiresome restriction of two-guns-per-person (or whatever) shoehorned into the title. The variety and types of enemy is also the same. The integration of the Source Engine's physics system also gives rise to the closest thing the game has to a new weapon, the ability to pick up flares and throw them at enemies, setting them on fire.

As noted above, the game has been redesigned on a micro scale in many areas: few rooms or corridors avoid having had some tweaks to make them more interesting, from whiteboards filled with amusing jokes (or occasionally dirty cartoons) to a mug featuring the Chuckle Brothers (dubious UK comedians) sitting on a security guard's desk. The general layout of the game is the same as before, but a few areas have been opened up. Whilst still a linear shooter, some areas do feature multiple paths, requiring Gordon to scout out surrounding corridors and rooms for bonus weapons and ammo before finding what is the correct way to proceed. These changes, though minor, do hugely enhance the feeling of Black Mesa as a place where, under normal circumstances, people work together.

Something that did come as a surprise whilst playing the game was the fact that, by modern standards, Half-Life is only barely a shooter. The game can happily go half an hour at a time without having any combat, instead throwing puzzles and environmental challenges at the player that must be negotiated without a shot being fired. These range from having to open up valves to prime a rocket engine with fuel and coolant so it can be fired into a blast pit, killing a giant, triple-tentacled monster inside, to finding a way of powering up a computer system so you can use it to unlock a blast door.

Combat, when it does take place, is intense and also quite tough: the AI of both the alien invaders and the marines sent to deal with them and also wipe out any eyewitnesses is impressive, especially given fan consensus that the original Half-Life actually featured better AI than Half-Life 2. Whether the smart, tough enemies of Half-Life would survive the transition to Black Mesa was a key question for many fans, even a dealbreaker, and it's a relief to report that they have. Enemies are smart and canny, knowing when to take cover, flank you and use grenades to flush you into a killzone.

Unfortunately, the game's transition to Source means that the controls suffer a little. The original game sometimes used a feature called 'crouch-jumping' to allow you to reach tall ledges that would otherwise be out of reach. For some reason Black Mesa actually forces you to use crouch-jumping far more than the original game, almost for every single jump in the game. When you have to run fast and crouch-jump (requiring three simultaneous button pushes whilst using the mouse at the same time), it's almost impossible to execute the move. It turns out the development team set the jumping parameters too low, but it's very easy to go into the source files and modify it back to something sane. The game also has a lot of problems with ladders. In fact, the only FPS I've ever seen handle ladders well was the original Half-Life. Every other game, including Half-Life's own sequels and expansions (and now its remake), seems to love sticking you to ladders to the point of mouse-throwing rage when it results in you dying. Also, for some reason, the 'walk slowly' button does not work, which makes traversing the aforementioned blast pit (inhabited by an indestructible triple-tentacled blind monster that hunts by sound alone) absolutely horrendous, although it's completely unnecessary for any other part of the game.

These problems seem fairly minor when you consider the overwhelming quality of the game. A few areas feel like they could have been truncated a little bit (the residue processing sequence in particular is a little dull) but overall, Black Mesa is a phenomenal achievement. The original game's superior level design, excellent weapons and impressive AI are now enhanced by modern graphics, a subtle-but-brilliant redesign of many areas to work better with physics and a new, moody soundtrack. The game does have a different ending to the original, however, concluding in the Lambda Complex as you prepare to teleport to Xen. The thorough, exacting redesign of the game means that Xen is not yet ready. However even this has its benefits, as the Xen levels are the most widely-hated part of the original game. Their absence makes Black Mesa a tighter, more focused (though, at over 10 hours, still very long by modern standards) experience, even if the bizarreness of the place (a refreshing antidote to 10 hours of grey walls) is missed a little.

Black Mesa (*****) is available now from the developers' website, completely legally and free of charge. The game will also be available from Steam in a few weeks.
Posted by Adam Whitehead at 19:00

Yeah, I just hit my first snag with the ladder, just before seeing the first tripod dog where you flood that small sewer to get to the other side of the doorway. =/

Overall, it's not a bad effort.

my wife is playing this right now - looks very good. The best bit though is the 'video walk through' she's following for tough spots. The guy is worse than her and you have to wonder how many takes it took to do make the video.

I plan to play the whole thing from Halflife (1) to the last episode if I ever retire. I played the first 4 or 5 im the years before the world stole my free time away.