Following quickly after the news of Black Mesa getting a release date (14 September), another long-in-development fan game has also been unleashed into the wild.

Battlestar Galactica: Diaspora is based on the reimagined version of the SF TV series. The game has been in development for four years, spinning off the never-released Beyond the Red Line title. Whilst using the classic Freespace 2 engine, Diaspora is not a 'mod' requiring the player to already own a game. Instead, it is available for free download and is a self-contained game in its own right. 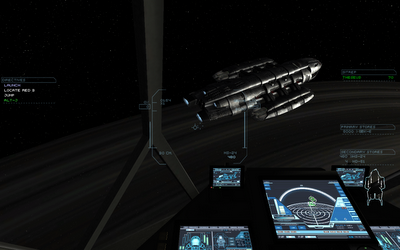 The game is a space combat simulator pitting the player as a Colonial pilot against the Cylon forces. The storyline has been kept under wraps, but it appears to feature a small Colonial military taskforce that escaped the Cylon ambush in the pilot mini-series, with a story that proceeds in parallel to the TV series (this seems to be the major difference from Beyond the Red Line, which was more of an attempt to directly replicate the TV series and its battles in the game). The Galactica and its fleet do appear, however.

The game is available on Windows, Mac and Linux.
Posted by Adam Whitehead at 15:51