Locus has published its publication list from now until next summer, revealing some interesting information: 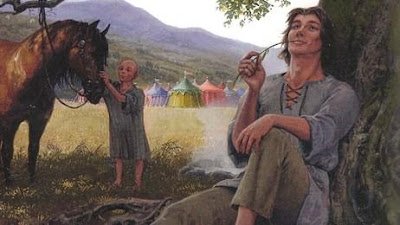 George R.R. Martin and Gardner Dozois's anthology Dangerous Women, including the fourth Dunk and Egg Song of Ice and Fire prequel novella, is now listed for release in May 2013. Amazon Germany is reporting that the book collecting all four Dunk 'n' Egg novellas into one volume will come out in May 2014. Whilst we have to take that with a grain of salt, that does tie in with the new story having a 12-month exclusivity contract before it can be reprinted anywhere else.

The same list confirms that the third Dagger and Coin novel by Daniel Abraham will be called The Tyrant's Law and that both it and Ken Scholes's long-awaited Requiem will be out in June 2013.

Meanwhile, Pat Rothfuss has sold a new fantasy trilogy to DAW Books. Despite speculation that this might be the rumoured sequel series to The Kingkiller Chronicle, there are also hints that this might be an urban fantasy trilogy consisting of notably shorter novels by Rothfuss's normal standards. He may also have already written (or partially written) the first book, meaning we might see it before The Doors of Stone (the final Kingkiller book). Hopefully Rothfuss will clear this up on his blog soon.

Finally, the new Star Trek movie allegedly has a title. It's Star Trek Into Darkness. Without a colon, which is apparently a deliberately stylistic choice. Hmm. Not sure about that one.
Posted by Adam Whitehead at 20:53

Thanks for the update! you're right about the grain of salt bit - according to the excerpt at the back of King's Blood (Dagger and Coin 2), it says book 3 will be called 'The Poisoned Sword'

I love the Dunk and Egg stuff. I wish he would live long enough to do other long form novels set in Westeros.

I've seen Doors of Stone floating around, but has it been confirmed that it will be the final title?

I think DAGGER AND THE COIN Book 3's had several different titles. THE TYRANT's LAW is, I believe, the current title but is still open to change.

As for GRRM, he has said that when he finishes ASoIaF he has ideas for a murder mystery novel set in the Free Cities and a first-person novel about Aegon the Unworthy, casting the 'worst king in the history of Westeros' as the hero of his own tale.

DOORS OF STONE I believe is the title Rothfuss himself has been using, but again could change before publication.

Wow, love that you are so informative! My blog is similar to yours, but yours is much 'better' and 'frequent' but I do enjoy writing!
Ya I think Abraham changed the name of the novel. That happens sometimes. With GRRM's books, he kept adding books back in the day, but still got to use the titles eventually.

I hope GRRM is able to complete Ice and Fire and Dunk & Egg on his own terms with as little pressure as possible. Hopefully in a realtive timely manner, too!

I can't help but read: "STAR: Trek Into Darkness!". Even better if you read 'trek' as an imperative verb rather than a noun, as though it's advertising an exciting tourist opportunity. Trek into darkness with our no-expenses-spared...


It's a terrible name.

Not a fan of the new way of naming series in Hollywood. What happened to good ole numbers? I know it's not *really* Star Trek 2, but can't we just call it that for simplicity's sake? I wonder what Avengers 2 will be called...

Any news about Kearney's Sea Beggars?