Post-apocalyptic North America is controlled by Panem, a dictatorial state which enforces control through discipline and fear. Every year, two 'tributes' from each of Panem's twelve districts are chosen at random to do battle to the death. The survivor of the carnage becomes rich and famous, and the people are reminded of the Capitol's power. Sixteen-year-old Katniss Everdeen volunteers to take her sister's place in the games, and must find a way to win despite her lack of experience and training. 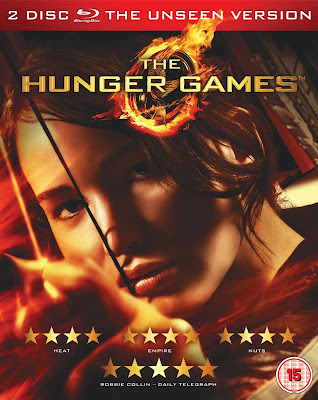 The Hunger Games is an adaptation of Suzanne Collins's YA novel of the same name and closely follows the events of the novel. Like the book, the film pits Katniss Everdeen in a fight to the death against twenty-three other youngsters, including her fellow contestant from District 12, Peeta Mellark. The story is divided into two distinct sections, the first involving Katniss's selection and preparation for the games and the second depicting the contest itself. This shift in setting and tone halfway through the film helps sustain and the tension and drama through the movie's running time (which, at almost two and a half hours, is fairly long for a YA movie).

The script closely follows the plot of the novel, apart from a fairly elegant solution to the problem of the book being based on Katniss's heavily-internalised experiences. In the novel Katniss can only speculate on the motives of the people running the game, but in the film we cut away to what's going on the game control centre and with President Snow. This expands the scope of the film a little and helps set up the sequels rather better than the novel, which was not written with sequels in mind and didn't layer in a lot of foreshadowing for what would come after.

The movie follows the book in presenting the Hunger Games as a satire on modern reality TV shows, but through the visual medium is able to take this a lot further through film clips of people commentating on the game like it was the latest season of The X-Factor. Unfortunately, rather like the book, the film also does not take this satirical edge far enough, instead opting for raising questions and then not exploring them far enough. This problem also extends to the story's use of violence and morality. As in the novel, Katniss and Peeta are never put into a position of having to kill any of the other victims of the game, only the 'bad guys' who revel in it. The movie cops out on putting Katniss and Peeter in real moral quandaries, which is a shame. The film also has variable CGI, with depictions of the Capitol's cityscape looking decidedly sub-par in places.

Aside from that, the film works pretty well. The movie is quite long but there's a lot of plot to fit in. Director Gary Ross has a crip, fast-paced directing style that moves us through the novel's major story beats without sacrificing too much atmosphere. He often finds concise ways of giving us backstory and worldbuilding information without having to waste time on exposition, which keeps things moving along nicely.

Performances are pretty good. The movie hinges on Jennifer Lawrence's portrayal of Katniss and she nails the role perfectly, bringing the required mixture of anger, determination, bravery and guilelessness. Josh Hutcherson has to settle for merely being good in the role of Peeta, with more established performers like Stanley Tucci, Toby Jones, Elizabeth Banks, Woody Harrelson and, of course, Donald Sutherland fufilling their roles with aplomb. Sutherland brings an air of real menace to the role of President Snow that bodes well for the sequels. Lenny Kravitz also impresses in the role of Cinna, though this role has been cut down from the books somewhat.

With a good script, economic story-telling and solid performances, The Hunger Games (***½) is overall an enjoyable movie. It loses some of the depth of the secondary characters and subplots over the novels, but on every other level is a very respectable adaptation. It is available now in the UK (DVD, Blu-Ray) and USA (DVD, Blu-Ray).
Posted by Adam Whitehead at 16:22

I think Sutherland was the best part of the movie. The novel lacked a real villain through which to personify the Capitol, and Sutherland gave a performance that was sinister but still human, and not over-the-top at all.

Overall, agree with your take on the improvements of the movie over the book. The best part, I agree, was solving the problem of Katniss' neverending and rather bland internal monologue.

Shaky cam has kept me from being able to watch it. Immediate headache that lasts for hours.

But how does it compare to Battle Royale?

Not as good as BATTLE ROYALE, either the book or the movie.