AD 2552. The Covenant - an alliance of alien races bound together under a fanatical religion - have launched an attack on Reach, one of the largest colonies in the United Nations Space Command. Noble Team, a special operations unit composed of specially-trained soldiers known as Spartans, are deployed to halt the Covenant gaining vital intel on alien ruins that predate both their species and humanity, and to try to prevent the fall of Reach until reinforcements arrive. 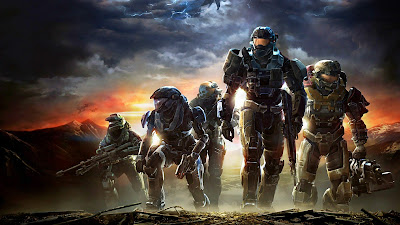 Halo: Reach was originally released in 2010 and serves as a prequel to the other games in the Halo series, taking place immediately prior to the events of the original Halo: Combat Evolved. For its PC debut, as part of the Master Chief Collection (which will eventually see the entire Halo series released on PC, mostly for the first time apart from old ports of the first two games), Reach has been spruced up with more modern graphics but in terms of mission design and plot it's been left alone.

Approaching Reach fresh, it feels like a curious halfway house between real old-skool FPS games (the 1990s era, arguably running from Wolfenstein through Half-Life 2) and later, crushingly linear console-driven FPS games like the later Call of Duty games. Each level is somewhat open, allowing you to determine how to approach each objective as you see fit, but as the game was built to fit into the hugely restrictive memory of the X-Box 360, so these areas are not particularly large. This means you have the freedom on how to advance and engage the enemy, but this freedom means generally moving across spaces generously twice the size of a football pitch at time linked by lots of corridor shooting designed to hide loading screens, all of which is pretty defunct on modern PCs which could hold the entire game in active memory if necessary. The restrictive weapons loadout of the series is still in place here, meaning you can only carry two weapons at a time and have to switch weapons frequently due to somewhat bafflingly limited ammo capacity.

This mixing-and-matching of weapons on the fly is fun, although somewhat half-hearted; several times per mission you are given a generous opportunity to stop and rearm yourself as you see fit, meaning the "desperate battle against the odds, surviving with whatever weapons you can scavenge" angle never really kicks in. Halo: Reach pulls its punches in delivering a more compelling FPS experience than the standard. 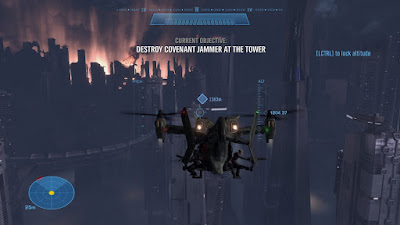 In terms of story, the game is pretty straightforward although not massively driven by exposition. The game seems to assume familiarity at all times with the previous Halo titles (and even the spin-off novels; the book Halo: The Fall of Reach sets up a lot of the events of this game), which was fine when it was launched as a prequel but more of an issue in its remixed form as the first game in the series for modern gamers new to the franchise via the Master Chief Collection. Exactly who the Covenant are, what their objectives are and the significance of both Reach and the alien tech on the planet are all left extremely vague. Mission objectives rarely vary from the FPS standard: go here, shoot this enemy, push this button, watch this cutscene. Regarding the latter point, at least Reach is not obnoxious: cutscenes are usually brief, reasonably well-acted (although always cheesy) and don't outstay their welcome.

Although restricted in size and boiling down to being variations on the standard arena-corridor-warehouse-corridor-arena structure, the level design is usually decent and the game changes things up by introducing vehicle-only levels, including a fun and diverting side-level when it turns into a space combat sim. A later mission changes the game into a helicopter combat game which is also fun, but both side-games and the main mission suffer a little from being too easy; FPS games designed for controllers have to be a little more forgiving of reaction times and responses. When ported to mouse and keyboard, they can become trivial unless redesigned to accommodate the much faster action and responses allowed. Halo: Reach hasn't, exposing the less accomplished enemy AI. Enemy units are well-designed, but "tougher" units are too bullet-spongey, soaking up ridiculous amounts of ammo to hide an inability to make them more of a threat through AI or strategy.

Despite all of these problems, I had fun with Halo: Reach (***½). It's a junk food game which is enjoyable, easy, short (the game barely cracks six hours and can be easily finished off in one sitting) and easy to digest without doing anything really memorable. Its soundtrack is distinctly above average, the graphics are solid for a ten-year-old game (even if the overreliance on static backgrounds is a bit more obvious than it was on release), the controls are responsive and there's a plethora of fun multiplayer modes. However, it is still only a slight and diverting game.

The game is available now as part of The Master Chief Collection, and over the coming months should be joined by revamped versions of Halo: Combat Evolved, Halo 2, Halo 3, Halo 3: ODST and Halo 4 (and probably Halo 5: Guardians, but that's likely a bit further off).
Posted by Adam Whitehead at 17:21