In the aftermath of the Battle of Endor, the Rebel Alliance has become the New Republic. But the new government is still gathering its strength and the Galactic Empire, fragmenting as it is, still has a vast fleet at its disposal. The Republic has a secret project it hopes will swing the conflict in its favour and assigns Vanguard Squadron to help secure it, but the Empire has learned of the project's existence. The legendary Titan Squadron is given a new mission: to locate the Republic's Project Starhawk and destroy it. 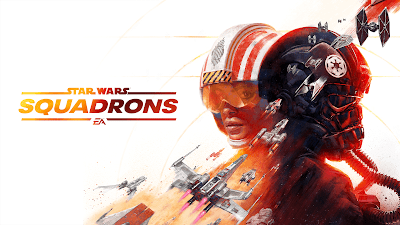 Back in February 1999 I eagerly queued up to buy X-Wing Alliance, the fourth game in Lawrence Holland and Totally Games' X-Wing series. If you'd told me than that it would take almost twenty-two years to get a follow-up I'd have flat-out disbelieved you. The X-Wing series had fantastic graphics (for the time), superb gameplay that matched accessibility with tactical depth and told pretty good stories in the Star Wars setting, and was going from strength to strength. Unfortunately X-Wing Alliance's quality was not rewarded by strong sales. In fact, the entire space combat genre fell off a cliff that year, with Freespace 2 also bombing despite being arguably the greatest game ever made of that type.

When EA confirmed earlier this year they were making a spiritual successor to that series, under the name Star Wars: Squadrons, there was widespread scepticism. EA's highly promising 2013 development deal with Lucasfilm to deliver multiple Star Wars games had delivered exactly three major games, the so-so multiplayer shooters Battlefront and Battlefront II, which were fun but lacking much depth (Battlefront II did come with a very short single-player story campaign), and the very solid Star Wars Jedi: Fallen Order. With EA's reputation for filling their games with different ways of draining money from players, there was a fear Squadrons would end up disappointing. 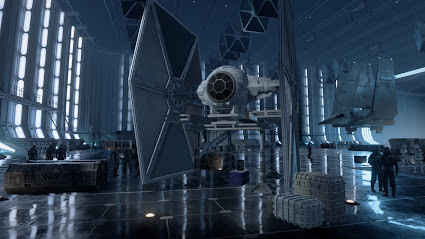 Much to everyone's surprise, Squadrons is actually a very solid game. It consists of a single-player campaign and two multiplayer modes, with absolutely no microtransactions of any kind. The game has even launched at around half the price of a normal, new release in 2020. It does have some weaknesses, but it gets much closer to the highs of the X-Wing series than most people expected.

As with the X-Wing series, you follow a series of missions (fourteen plus a super-sized prologue, which the game counts as two different missions) which tell a story. Unlike the X-Wing games, there's a huge focus on your wingmen and squad mates, which both Vanguard and Titan squadrons having an interesting roster of new characters, each with their own backstory and personality. You can talk to your fellow pilots during mission briefings and on the hanger deck to get some more insight on the story and the objectives. There's no great shakes here - the game's writing is functional at best - but it's a nice touch and a solid growth from the older games where your team-mates had no development whatsoever. Unfortunately it also removes some tension from the game, as your squad-mates are all essential characters and can't die mid-mission. 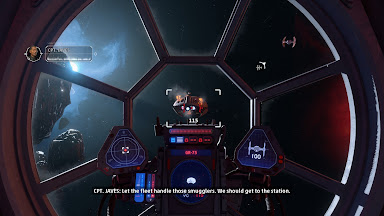 Once in the cockpit, the fun kicks in. You can pilot your fighter via mouse-and-keyboard, gamepad or joystick, with an array of UI aids that you can switch on or off depending on your skill level. You can also set the degree of the simulation and customise controls. The flight model is very solid, being mostly arcade-like but with the ability to shut down engines, glide and then boost in a different direction which can lead to some nifty manoeuvres. It's not a patch on, say, Elite: Dangerous' flight model but it's an improvement on the old X-Wing series. There's also greater control over your power systems, with shunting all power to engines charging up an afterburner-like boost, or shunting all power to shields allowing you to overcharge them. There's more options for equipment as well, such as a hull repair droid you can use to fix hull damage mid-mission (vital equipment for unshielded TIE fighters, in particular). There's far more customisation options then there ever was in the 1990s games, which adds a surprising amount of depth.

The game is definitely not the disposable arcade blaster some were fearing, although there are some concessions to less-hardcore modern games. The game is more forgiving about allowing your laser blasts to hit as long as your target is in the reticule and far more forgiving about damage. As well as the hull repair robot and the shields on Republic ships, calling for a resupply will also fix hull damage, and your support ship may repair you even if if you haven't called for aid if you take an unexpected pounding. There is a cooldown on the repair options, though, so you can't spam repair orders to get through tough situations. 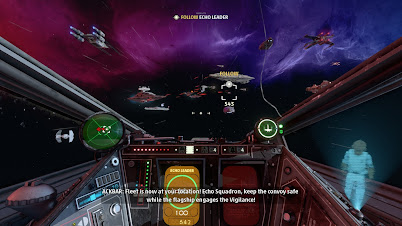 The missions are surprisingly inventive, rarely pitting you into battles in open space devoid of features. Instead you find yourself fighting in a nebula which impacts on sensors, in an asteroid field, in the atmosphere of Yavin where diving too deep may fry your fighter, or in a massive scrapyard where you have to dodge debris and use ejected power cores as makeshift mines. The constant inventiveness at times strains credulity - a few more battles against a more traditional space background would have been nice - but certainly keeps the game interesting.

There is a draw back with the colourful backdrops, the impressive explosions and huge glowing laser blasts, that sometimes the noise of it overloads the UI and you loose track of where your targeting reticule is pointing or the status of your engine booster. This problem is accentuated by the fact you can't switch off the (impressive, it has to be said) 3D cockpits as in X-Wing Alliance, or go third-person as in all previous X-Wing games, which would help clear up the problem. Some of the feedback in the game is also a bit variable: missiles in particular feel poorly-rendered, looking like big fireballs your blast out of your ship rather than warheads. 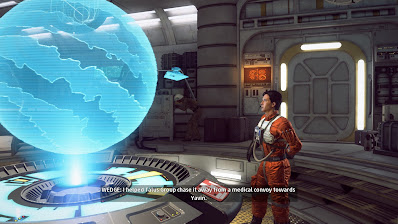 Still, the flight model is mostly great and blasting enemy fighters out of the sky is impressive and fun. There have been concessions which occasionally make the game feel a bit arcadier than the old X-Wing games, but these are balanced out by even more options for customisability and controls.

The biggest issue with the game is value for money. If you enjoy playing singleplayer and multiplayer, the game is an easy recommendation. If you want the game for just singleplayer, it becomes more questionable. The 16-mission campaign will take you less than ten hours to complete (I finished it at 9.5 hours, but that includes leaving the game on for an hour whilst I had dinner and a fair degree of faffing around with my control setup, so 8 hours would easily be doable). You can also fly in the multiplayer mode against bots, which is a nice feature you don't see often any more, which can extend the playing time out quite a bit, but I doubt you'll get more than 15-20 hours out of the game for single player-only content. Multiplayer gamers with no interest in the story mode may also find the content the game ships with a bit on the weak side: there are only six maps and two multiplayer modes, and there's no more than 10 human players in a match (even when there's way more fighters present in a battle, with the rest being controlled by the AI). 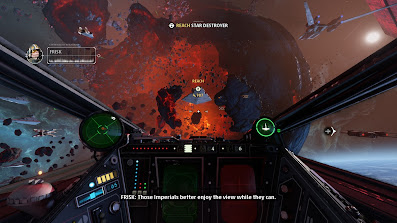 The game has launched at half-price, which certainly makes up for this issue to a point, but without more free post-launch content, it's still questionable if the game is worth the price. However, it also does feel like this could be the launching platform for something bigger. If it does well, a sequel with a more elaborate campaign or an expansion which adds more ships (the B-wing and TIE Advanced/Defender feel like egregious absences) is a possibility.

Star Wars: Squadrons (***½) is a solid and respectful follow-up to the X-Wing series, even if it can't match those earlier games in terms of story and the length of the singleplayer campaign. It is often inventive and entertaining, with a great flight model and fun combat, but it's questionable if there's enough meat here to satisfy long-starved space combat fans, not when X-Wing Alliance is available cheaply from GoG with a huge number of mods available to spruce up the visuals. This could be the foundation to something more interesting down the line. The game is available now on PC, PlayStation 4 and Xbox One.

I have the on Steam waiting to download and I’ll probably get a joystick too. The game itself to be getting positive reviews wherever I look and the decision not to add micro transactions is a good one,

Like you, I adored the X-Wing games and always wondered why no one had released this style of game between then and now. I was terrible at it, but it was a rewarding experience.