Talsorian Games have confirmed that Cyberpunk Red, the latest edition of the long-running Cyberpunk tabletop RPG franchise, is to launch on 14 November, just ahead of the release of the Cyberpunk 2077 video game (set in the same universe) five days later. They also have a detailed breakdown of the game contents here. 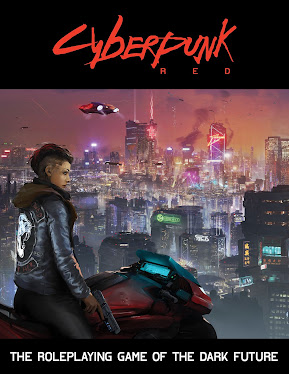 The Cyberpunk RPG franchise began in 1988 with the release of the original Cyberpunk RPG, set in the year 2013 in the new metropolis of Night City, a custom-build technical megalopolis located in Morro Bay, California. It depicted high-end corporate warfare and espionage in a high-tech future (which is now, of course, an alternate past), with street hustlers and hackers working missions on the Net and in the real world on behalf of shadowy interests.

The RPG hit its stride with the release of the second edition, Cyberpunk 2020, in 1990, which became arguably the definitive version of the game and remained in print for fifteen years, spawning dozens of expansions, several novels and a stand-alone spin-off, Cybergeneration, aimed at younger players. The game also inspired the immensely popular collectible card game Netrunner as a spinoff (although the current edition of the game, Android: Netrunner, has used a different setting since 2012).

A third edition, Cyberpunk V3.0, was released in 2005 and saw the game move to a further-future transhuman setting, with major changes to the rules system that were received negatively.

Cyberpunk Red features a revamped (and better-received) rules system and advances the timeline of the tabletop game to the 2040s. The title - which was decided before CD Projekt Red optioned the franchise for a video game - comes from the skies over Night City, which have turned red after particulate matter thrown into the atmosphere during nuclear exchanges in the Fourth Corporate War.

Cyberpunk Red's digital edition will launch on 14 November. Its physical release - a chunky 456 page rulebook - will be on 19 November, the same day as the video game, although the publishers note that COVID-related delays are possible.

Cyberpunk ranks as one of the great, venerable tabletop RPGs, alongside the likes of Dungeons & Dragons, Traveller, Shadowrun and World of Darkness, and it's good to see it back in print and its world about to be introduced to vastly more people than ever before through CD Projekt Red's video game.