Game of Thrones is the most successful show in the history of HBO, rising from humble beginnings in 2011 to become the biggest TV drama on the planet. In 2019 the show wrapped after eight seasons and 73 episodes to deliver one of the most negatively-received final seasons in recent memory. Journalist James Hibberd, who was allowed on set of the show every year from the second season onwards, has written a behind-the-scenes account of the commissioning, writing and making of the show, referring to hundreds of interviews he undertook whilst the show was on air and more undertaken since. Among the people he's spoken to are George R.R. Martin, David Benioff and D.B. Weiss, and vast numbers of the cast, from the smallest bit-part player to leading actors Kit Harington, Peter Dinklage and Emilia Clarke. This is the oft-contentious story of the making of the show that changed television. 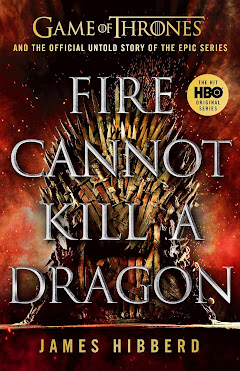 TV companion books are a bit of a dying art these days, with the Internet and its plethora of fan blogs and wikis making them feel a bit redundant. Game of Thrones is so huge - and controversial - that it can overcome that problem and James Hibberd is well-placed to write such a companion volume given his access to the writers, the sets and the actors (via his work at Entertainment Weekly covering the show). He starts at the beginning, with George R.R. Martin starting writing the Song of Ice and Fire novel series in 1991, and proceeds through David Benioff and Dan Weiss picking up the books, wooing Martin to letting them and HBO have the rights, and their difficult struggle to get a pilot made, and the difficult process of admitting that they'd messed up the pilot and had to hope that HBO would give them a second chance. From there things proceed roughly chronologically until the end of the show.

The first thing that has to be noted is that this is not an "unauthorised" guide to the making of the show, but a HBO-approved product (complete with HBO-provided photographs). If you're expecting to find dirt and gossip, you're not going to find it here. Anything majorly contentious has been finely exercised from the text. Hibberd also doesn't add much in the way of authorial opinion, letting events stand for themselves and quoting other critics in determining if a plot twist or story turn was successful or not.

Despite this, the book's fact checking clearly left something to be desired. On the very first page of the book we're told that the Battle of the Bastards was filmed in October 2014; it was actually a year later (my friend, who was a weary extra on the set of Hardhome, noted that was when they were filming that battle). A few pages later we're told that George R.R. Martin started writing A Game of Thrones in 1993 but it was actually in 1991. A few other, similar errors crop up through the book and it does feel like a bit more attention to detail would not have gone amiss.

Once that hurdle is overcome, there is much to enjoy. Hibberd is a solid writer who knows how to handle and place quotes, and how to interview subjects, and to his credit he does avoid repeating a lot of stories and information that close watchers of the show have heard a thousand times already. Some of the familiar anecdotes do get trotted out yet again but there's a lot more information here that I hadn't ever heard before, such as director David Nutter almost dying in Iceland when his car crashed during a blizzard on a location scout and it if had rolled in a different direction, it would have plummeted off a sheer drop. Other stories are less dramatic but amusing: the weather in Iceland during Season 2 was so bad that scenes were often shot right outside the hotel the cast and crew were staying in, with constructive camera angles being used to hide that fact and actors having to perform in full view of all the guests in the dining room. During Season 1 they didn't have any security and David Benioff had to personally stand guard over Robert Baratheon's tent to stop curious bystanders from making off with props. And so forth.

These stories are amusing bits of trivia but somewhat inconsequential. Meatier are the controversies. The book doesn't shy away from many of these, spending a surprising amount of time debating the merits of Daenerys and Khal Drogo's relationship at the start of the show with the writers and actors, and the different ways they approached it in both the pilot and the reshoot with different actresses, and on the depiction of the Sansa-Ramsay-Theon relationship in Season 5. There's also a lot of open discussion about the weak Dorne storyline in Season 5 and how it didn't work and they had to scramble to try to fix it later on. Other controversies are completely ignored though, with a particularly criticised Cersei/Jaime scene in Season 4 getting no mention at all.

Even more interesting are the moments when people get a bit too honest. It's clear from the writing that some of the producers encouraged something of a "fratboy" relationship with other cast and crew, and sometimes pushed things too far, resulting in tense moments on set. The most honest and outspoken actor in the book is Liam Cunningham, who cuts through the normal Hollywood PR banter (which to be fair most of the cast try to avoid, but sometimes fall into it by rote) to deliver some real honesty on some of the conditions of shooting. His pointblank refusal to film some scenes because he felt they betrayed his character and made Davos less of a relatable figure is quite startling. He also stands up for Stephen Dillane, who played Stannis Baratheon and had made some dismissive comments of the show (Dillane didn't take part in the new interviews for the book), noting that Dillane always did good work, had a strong work ethic and a withering sense of humour that didn't always come across well in interviews.

The thing most people will be interested in is the reception to the finale. Benioff, Weiss and Martin don't really talk about it, but plenty of the actors, several HBO executives and Bryan Cogman do, and note how things may or may have not worked as well as they'd hoped. However, there is a bit of a disappointing PR answer that maybe the ending will be looked upon differently in another ten years.

Hibberd has certainly written an above-average TV companion book here, with plenty of interesting stories and funny moments of trivia, but it's one that also has some glaring holes. Ramin Djawadi's memorable score (the one thing almost uniformly praised about the series) goes almost completely unmentioned, the work of Elastic and Angus Wall on the memorable title sequence is also disregarded and the CG teams tasked with bringing the locations and creatures to life are also not quoted. It's good to see the writers and actors being self-deprecating and owning various problems and mistakes, but there's also a few moments when it feels like the book pulls its punches and doesn't delve deeper into behind the scenes issues. The book's real achievement may be in getting Benioff and Weiss to admit what many had suspected all along: they really wanted to be making movies all along, they always planned to prioritise big battles and effects over character and theme (Benioff's daft assertion that themes are only for eighth-grade book reports is mentioned several times) and that without Martin's books to rest on, they lost confidence in how to proceed and struggled more without source material.

Fire Cannot Kill a Dragon (***½) is readable and fun, packed with fresh anecdotes and interesting trivia about the making of Game of Thrones. In some areas it is insightful and revelatory, getting further into why certain baffling decisions were taken, but in others it leans back and goes out of its way to avoid criticism or controversy. It certainly doesn't trouble the quality of The Deep Space Nine Companion, which twenty years after release still represents the gold standard of a TV companion volume. But it's certainly worth reading if you're interesting in what happened behind the scenes on the biggest show of the decade. The book is available now in the UK and USA.