In slightly surprising news (or utterly unsurprising news, depending on how cynical you are), CD Projekt Red have confirmed they are delaying the release of Cyberpunk 2077 yet again. This is their most modest delay yet, being by just 21 days to 10 December. 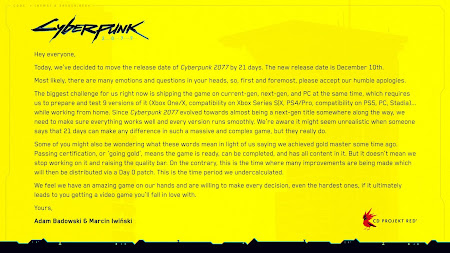 Cyberpunk 2077's delays are becoming meme-like at this point. The game was originally announced on 19 October 2012 - yup, eight years ago - before getting its first teaser trailer on 10 January 2013. After going completely radio silent on the game for five years, CDPR started revving up the hype engine again by releasing a much bigger trailer on 10 June 2018.

CDPR finally announced a release date with a trailer that they released on 9 June 2019, which confirmed both the participation of Keanu Reeves and the release date of 16 April 2020. However, this was delayed, first until 17 September and then 19 November.

The news seems to have taken the CDPR Twitter team by surprise: as recently as yesterday they were telling people it was fine to take 19 November off of work because the game would definitely, 100% come out on that date. Unsurprisingly, a lot of fans (especially those who have arranged holidays around the date) are unhappy with the news.

CDPR has cited multiple reasons for the delay, including a switch to work-from-home for staff during the COVID-19 pandemic. They have also been testing nine versions of the game simultaneously: one each for the PC, Stadia, X-Box One and X-Box One X, PlayStation 4 and PlayStation 4 Pro, X-Box S, X-Box X and PlayStation 5 platforms. The cross-generational release of Cyberpunk 2077 (not a problem facing their last, mid-generation release of The Witcher 3 in 2015) and ensuring a bug-free launch seems to be their key concern here.

The news will be disappointing to many, although the delay is somewhat modest and the game will still arrive this side of Christmas (assuming no further delays).

O. my. I pre-ordered this game and I don't even play a lot of video games as of late, but geez. I mean look at how much publicity Fallout 76 got for being buggy and not ready, but Bethesda released it anyways. . .I mean, I'm not upset that I'm not getting my game when it was originally promised. I'm just kinda shaking my head because they CAN push updates after release. . .I think they might be using this as promotional material and then we have to listen to the guy moaning a groaning at work because he's a gamer and he will probably tell other people that might not have heard about the game. . .probably me just being paranoid though. Thanks for sharing the news. I hadn't heard about it otherwise as of yet.