A radio broadcast brings the Sole Survivor of Vault 111 to Nuka-World, an old theme park located west of the Boston Commonwealth. The Survivor finds three raider gangs working together under the leadership of a brutal but lazy warlord; eliminating the warlord, they find themselves unexpectedly in charge of three large raider armies who want nothing more than to conquer the Commonwealth. The Survivor must also unlock the secrets of Nuka-World, and choose carefully how to handle their new charges. 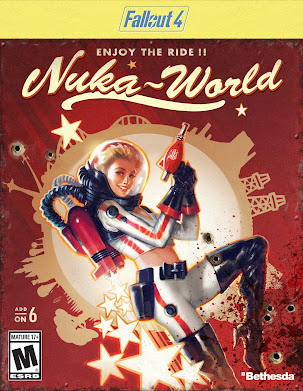 Fallout 4 is, by itself, an enormous sprawling CRPG offering more than a hundred hours of content, divided between a complex, multi-sided storyline; exploration; combat; and even settlement-building. To expand the story and world, Bethesda released first Far Harbor and then Nuka-World to add new content to the game.

I must admit that I never got round to Nuka-World the first time around. It was released too long after my initial playthrough of Fallout 4 had left me a bit burned out on Bethesda CRPGs, so it sat on my to-play list until I felt motivated to replay Fallout 4 itself from the start. 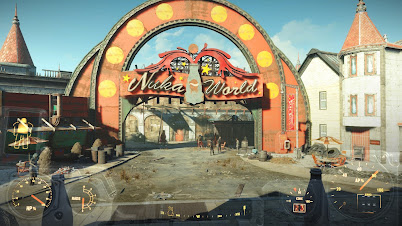 Nuka-World, like Far Harbor, adds a large new area to the game which functions as something of a microcosm of the traditional Fallout 4 experience. You can explore this area at your own pace, picking up side-quests, meeting characters, navigating between different factions and following the main storyline. Setting the game in a theme park is a stroke of genius, as each, differently-themed zone of the park gives rise to different stories, puzzles and enemies, and allows the game to riff on Disneyland, Westworld, Jurassic Park and various other influences to entertaining effect.

The expansion is definitely a bit less engrossing than Far Harbor, though. Far Harbor Island was about the same size as the Nuka-World park, but the more interesting and varied terrain and all-enshrouding fog resulted in a much more interesting and atmospheric setting. Nuka-World itself is wide open and sits on a rather dull flat plane; you can see almost the entire park from many points on the map, resulting in less of a surprise as you explore. There's much less of a focus on settlements, as Nuka-World has only one settlement which only unlocks at the end of the story, unlike Far Harbor's four settlements which unlock much earlier on. This means that if you are collecting supplies for settlement building, you need to constantly travel all the way back to the Commonwealth to dump your supplies rather than a local workbench, which gets old quickly. 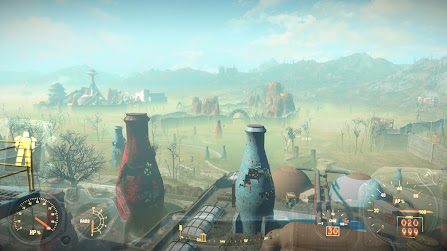 As an area to explore, the theme park is fun and there's some nice side-quests as you travel through the park. The expansion's biggest weakness is trying to follow the main story. This starts well and there is great comic potential as you end up inadvertently in command of three different raider gangs, each one made up of deranged lunatics, and have to navigate between them cautiously. The problem is that the main story assumes that you're playing an evil or at least amoral character and you're happy to send the raider gangs back into the Commonwealth to take over settlements, including ones you've already taken over on behalf of the Fallout 4 factions, which will pitch you into war with them. If you refuse to do this - because it doesn't make a lick of sense if you're playing a good character - then the story screeches to a halt and the only way to proceed is to trigger the quest that requires you to wipe out all three gangs (which is surprisingly tough; the game matches the raiders to your level and these can provide quite the challenge even for high-level characters). A more inventive approach would have been giving you the option to pitch the gangs against one another or bring in one or several of your Commonwealth-allied factions in to help eliminate them. The Minutemen seem particularly annoyed by the raiders but decidedly unwilling to help you eliminate them, which is odd. 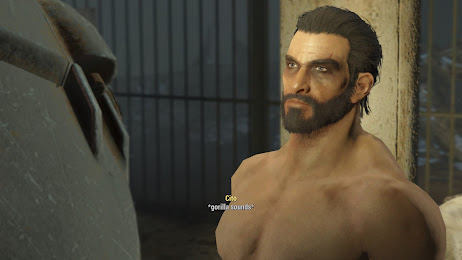 This narrative disconnect is a bit of a shame, because there's a lot of fun to be hand in the expansion. Fighting alligator-deathclaw hybrids in a Jurassic Park-style setting is superb, and a Tarzan-inspired mission where you have to team up with a buff almost-naked guy and his adopted gorilla family to wipe out deathclaws is one of the funniest things in the franchise. A trip through a "world of tomorrow" exhibit promising to create space-borne vaults is entertaining and a solid side-quest carries you over the park looking for secrets to unlock the founder's own personal vault (with some amusing riffs on Walt Disney's life story).

Fallout 4: Nuka-World (***½) gives you more Fallout 4, which for a lot of people will be enough. There's some fun to be had here and some fun quests and side-stories, but the main story doesn't seem to have been well-thought-through, resulting in a less compelling experience than it could have been. The expansion is available for Fallout 4 on PC, PlayStation 4 and Xbox One.

I am on my second play through and find myself putting the raider quests on hold until after I clear out the park and its collectables. In my first play through I sent raiders to an unmanaged settlement. Preston was mad but there was nothing left to do with the Minutemen anyway. This time I am using the We Are the Minutemen mod so I will keep them happy and clear out the raiders once they ask me to invade the Commonwealth.

When I go to Nuka World I have a grenade Mod that allows me to throw and make 20 Broterhood of Steel soldiers appear I clear out every location then go Kill shank start open season throw the grenade all over Nuka town and Eliminate the Raiders also I have Porter Gage loyalty Mod that makes him loyal to me so he turns on the Raiders as well.