2035. Ten years have passed since the destruction of the dimensional rift, through which an alien race was sending biological war machines - kaiju - to weaken humanity's defences. Although Earth appears to be safe for now, humanity has not rested on its laurels and has rebuilt the Jaeger programme, giant war mecha capable of taking the fight to the aliens. Jake Pentecost, the estranged son of the late Stacker Pentecost, is drafted back into the Jaeger programme to help teach a new generation of students, but moral is low when it is revealed that the the Pan-Pacific Defence Corps are developing a new generation of drone Jaegers that do not need human pilots. When a rogue Jaeger attacks a PPDC conference, Pentecost realises that the aliens are not the only enemy... 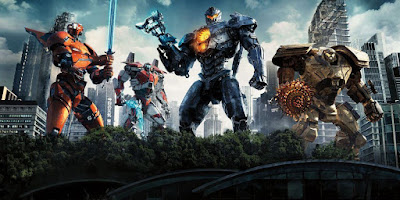 The original Pacific Rim is one of favourite movies of the last decade on the level of being a purely entertaining action flick. It didn't make a colossal amount of sense and the story was hardly deep, but Guillermo Del Toro made the "big robots fighting big monsters" story he'd always wanted and had a huge amount of fun in the process, making sure that viewers joined in with that fun.

Del Toro spent years trying to get the sequel made and, unfortunately, by the time the wheels were turning on it, he'd already moved on to other projects. Stepping into the breach - so to speak - was Steven S. DeKnight. DeKnight is hardly on the same level of reputation as Del Toro, but is also no slouch, having been a writer-producer-director on shows such as Buffy the Vampire Slayer, Angel and the first season of Daredevil.

Unfortunately, the loss of Del Toro was only the first setback for the movie. It was quickly followed by the discovery that leading actor Charlie Hunnam was also going to be unavailable. With several of the other leads of the original Pacific Rim having been killed off in that movie, it left the sequel with a lot of storytelling void to fill. Still, the movie rallied by casting hot man-of-the-moment John Boyega (Finn in the Star Wars sequels) as the new lead and setting up a strong new story about the Jaegers becoming obsolete. The movie also undercuts expectations by leaning into a human-vs-human struggle based around Jaeger technology and kaiju bio-technology. This makes the movie feel a bit "smaller" than the first movie, with less of an omnipresent sense of dread and instead more of a mystery angle. I quite like it when a sequel goes cleverer rather than bigger for a sequel and was pleasantly surprised when Uprising took that route.

I was even more surprised when Pacific Rim: Uprising decided to also double down on characterisation compared to the first movie, which painted its characters with a fairly broad (to the point of transparent) brush. Uprising spends far more time setting up its characters and their motivations, particularly in the key subplot about a new team of cadets where all the characters are established in more detail compared to the first movie (where we didn't even learn the names of some of the Jaeger pilots). Again, no great shakes here (stereotypes and cliches abound), but the fact that I could tell which character was which and why they were doing what they were doing was an improvement over the original film.

Part of the problem with this approach is that it's perhaps a little wasted: Pacific Rim was a film about giant robots fighting giant monsters, not an in-depth character study, and it wasted no time in telling that story. Uprising's greater character focus proves to be structurally problematic, meaning we're 45 minutes into the movie - almost half its runtime - before the stakes and main storyline become clear. The second it does become clear, the movie slams the accelerator down and bombards the audience with a series of impressive set-pieces, including mecha-on-mecha battles in Sydney and in the Siberian wastes, and a truly impressive daylight slugfest rampaging through the streets of Tokyo before the movie ends at under the two hour mark (a clear twenty minutes shorter than the first movie). This makes the film feel a bit lopsided: the first half is a little too slow, the second half a bit too fast, especially when several plot twists (and the old plot twist that is itself then twisted five minutes later) undercut expectations superbly, but a little confusingly.

Still, Uprising ended up being far better than its mixed reception had led me to expect. Del Toro's defter hand on the directing tiller is missed, but DeKnight does reasonably well (even if he's a bit too in love with slow-mo action shots). I actually cared about the characters a bit more than in the first movie, although the somewhat brusque offing of some of the first movie's characters (on and off-screen) felt a bit off. In terms of plotting, the movie was surprisingly clever, adding meat to the fairly thin worldbuilding of the original and setting up a lot of plot directions the franchise can take in the future. The script had a fair few clunkers, sharing with the original an often inappropriate-feeling level of humour, but then this was never going to be an Academy Award-troubling film. The performances are all fine to good - John Boyega is clearly enjoying himself immensely - and the action sequences satisfyingly chunky.

Pacific Rim: Uprising (***½) is an enjoyable and fast-paced sequel to the original. Like the original, it's a B-movie with a huge budget and, on that level, delivers what it set out to do, and in some areas (like plotting and characterisation) is actually better than the first flick. Unlike the original, the pacing is not as strong and DeKnight, although perfectly solid, lacks Del Toro's directorial confidence, meaning the film occasionally flags a little when it should be ramping up and goes too manic during moments when it could do with slowing down. Still, a surprisingly decent sequel.

Pacific Rim: Uprising did not set the box office on fire on release and a third movie is unlikely at the moment, but the franchise is continuing with an animated Netflix show, due to air in late 2020.
Posted by Adam Whitehead at 19:48

Yes, it's not a flawless movie but it still has more going for it than it gets credit for