BATTLESTAR GALACTICA 3.0 gets its showrunner, confirmed to be another remake

The third TV version of Battlestar Galactica (fourth if you count Galactica 1980 as a separate thing, which you probably shouldn't) is heading to the screen with a new showrunner appointed. 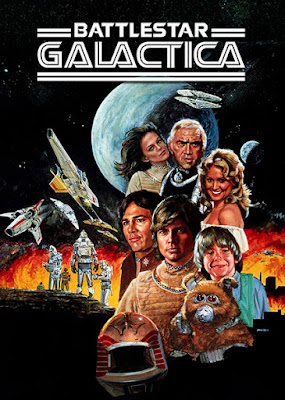 Michael Lesslie (AMC's The Little Drummer Girl, MacBeth, Assassin's Creed) has been tapped to take the lead as writer, co-creator and showrunner on the project. Sam Esmail (Mr. Robot) is serving as co-creator, writer and executive producer, and may direct the first episode. However, it sounds like Esmail's role may be more in launching the project and then stepping back, which will probably dismay those who were only interested in the project because of Esmail's involvement.

The new Battlestar Galactica was originally touted as not a reboot or reimagining, but instead as a new chapter in the universe created by Ronald D. Moore for the 2003-09 SyFy series. Indeed, Esmail called Moore to get his blessing to develop the idea before taking it to NBC. However, in today's statement, Lesslie says the new series will pay tribute to both Moore and the original 1978-80 series created and run by Glen A. Larson. The press release also says it will be set in a "reimagined world," suggesting it will offer a new, fresh take on the franchise.

The news will likely not go down well among fans of either Battlestar iteration, perhaps feeling that between the bright and optimistic original take on the idea and Moore's much darker, grittier iteration, there really isn't anywhere else to take the premise. We will see as it the idea develops further.

The third Battlestar Galactica will launch on NBC's streaming service, Peacock, with a production schedule to be decided once the pandemic has ended.
Posted by Adam Whitehead at 20:25

There's absolutely a lot of potential in another version of Battlestar. The premise (a sort-of-human-but-not species are almost wiped out by a robot uprising, and only a small number of 'humans' survive as interstellar refugees) certainly has potential, and although Moore's BSG nailed a great tone for the premise, you could certainly do more with it, moving further away from the (sometimes powerful, sometimes too on-the-nose) Iraq War allegory, exploring the culture more, making the cylons... well, better... and generally having some sort of actual plan for the series arc instead of making two brilliant series and then realising you had no idea what you were doing or why and then just procrastinating for two more seasons. I hope we'll see another BSG that's just as good as, if not better than, Moore's version. And maybe this'll be it!


...but I really doubt it. I think a new BSG remake has to go in the same file as a Buffy the Vampire Slayer remake, or a Game of Thrones remake, or indeed a Twin Peaks remake, or a Wire remake: all great ideas on paper, but we're going to have to wait at least a couple more decades. We're going to have to wait for the culture and/or technology to change enough to make these remakes actually have a purpose, and be distinct enough from the originals to be worth watching (eg you could absolutely make a better version of GOT... but if you did it right now, it would feel pointless and nobody would watch it). And, frankly, we're going to have to wait until our cultural memories of the originals have faded enough for the remakes to not feel like heresy...


It's different for different series, but for BSG, I think maybe we should follow Moore's lead, and set around about a 25 year period between each version. Maybe only 20 if it's someone with a really great idea for it. So far it's only been 11 years since the last BSG ended. And that's just too soon...

Gotta say I'm sceptical. I feel like this is coming way too early; BSG 2003 did such a good job telling the story, I just don't know what they could be doing different this time around that wouldn't be strictly worse. But I love the franchise enough that I'll give it a go if this comes to Netflix/Prime in Europe.

Another one of those reboots where you just wonder what the point is. Did they miss Amazing Spider-man 1 and 2? Do we need another retread, not really. Would we accept a soft reboot to either version, yes if it meant not another version of the same origin story.

My prediction one season where it just goes over the same old destruction of the colonies. Cylons hunting down the remnants of humanity, Starbuck is a robotic dog this time around for the variety, someone from the 2003 reboot is cast as a villain, then just at the end, a massive plot twist leaves the season on a cliff hanger...

Show gets cancelled and the showrunner tells us years later that it turns out the Cylons are actually a biblical plague sent by God, floods, locusts, boils etc. being a little redundant when you can travel between planets.

The last survivors of humanity eventually meet God which comes as a shock, but not as much of a shock as when they find out God is actually a probe from Earth, the lost 13th colony they've been searched for. Over millennia the probe had become sentient inventing the Cylons through a human agent, but back when it was just a probe it was called V'Ger.... No not V'Ger it was called Voyager 6....

I'm intrigued. Haven't seen the original, but the reboot never sat right with me. Something about its obesessive fascination with military toughness put me off. I much preferred the warm, naïve charm of Firefly over the facistoid BSG characters screaming at each other through gritted teeth.