Mahit Dzmare has been appointed as the new ambassador from Lsel Station to the homeworld of the vast Teixcalaanli Empire. The previous ambassador has gone silent under unusual circumstances and Mahit's job is to find out what happened to him and why he failed to return home for fifteen years prior and how he has maintained Lsel's independence. Mahit's mission is complicated by a malfunctioning implant containing the memories of her predecessor (fifteen years out of date) and by an internal web of politics within the Empire which threatens to undermine Lsel's position...whilst factions on Lsel itself are interfering with her work from afar. 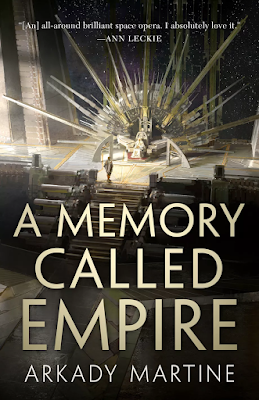 A Memory Called Empire is the debut novel by Arkady Martine and the first part of a loosely-connected duology (a second book, A Desolation Called Peace, will be published in early 2021). It is a far-future, science fiction epic revolving around the Teixcalaanli, a civilisation that fuses cyberpunk technology (though with a proscription against brain implants) and Aztec and Mongol cultural influences.

As is always handy when introducing an alien new culture, our POV character is herself an outsider. Mahit hails from a much more practical, pragmatic society based inside a space station, a self-regulating habitat which is totally technology-dependent with no single points of failure. Every time someone dies, their memories and something of their personality are implanted in a successor, who gains access to their lifetime's knowledge and experience and can start building on it. As such every life is inherently important, as it contributes materially to the development of the culture and society as a whole. This is the inverse of Teixcalaanli, where brain implants are seen as anathema and the society is much more inherently conservative: with access to amazing technology which could be used to create entertainment, their primary cultural obsession remains poetry.

There's a lot of clever ideas floating around in A Memory Called Empire. The philosophical concept of identity and how it is built from memory and cultural influences is a key part of the text, but one this explored subtly and intelligently throughout. There is also a fair bit of worldbuilding of the Teixcalaanli and their homeworld, which is mostly achieved through plot developments and action. Infodumping is occasional but fortunately rare. Characterisation is strong, as Mahit expertly chooses which sides of herself (and her culture) to show to the Teixcalaanli, and is not above preying on their instinct that she is an uncultured barbarian from a society with nothing to offer.

A few people have drawn similarities in tone to Ann Leckie's 2013 debut, Ancillary Justice. I think there are a few such comparisons to be made, mainly down to the idea of a technology-driven identity crises, but A Memory Called Empire is also a stronger book, and in particular it does a much, much better job of laying pipework for a sequel whilst being a complete novel in itself (Ancillary Justice was very much a strong stand-alone somewhat undermined by two lacklustre and unnecessary sequels). I think comparisons to the work of Lois McMaster Bujold and to China Mieville's SF novel Embassytown can also be drawn, with regards to how identity, history and language are interrelated concepts which can define people as individuals and a culture.

If I did have one complaint it would be that the ending feels a little neat (I'm not sure if a symbolic gesture would be really enough to get a determined enemy commanding a vastly superior army to surrender) and abrupt, but Martine does enough good work here to make the semi-sequel an immediate buy.

A Memory Called Empire (****½) is a striking debut novel which muses on big questions and wraps them around a compelling story that is part identity crisis and part socio-political thriller. The novel is available now in the UK and USA.
Posted by Adam Whitehead at 12:54