Breq is an ancillary, an animated corpse possessed by the controlling intelligence of a vast starship, the Justice of Toren. The Justice was destroyed more than twenty years ago, with Breq as the sole survivor and the only person to hold a secret that could tear the interstellar empire known as the Radch apart. Breq, now driven by grief and vengeance, goes in search of the only weapon that can accomplish her goal. 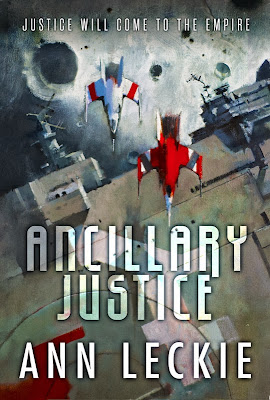 Ancillary Justice is the debut novel by American author Ann Leckie, who has already established herself as a writer of short stories. It's an interesting SF novel which riffs on a whole load of ideas. The most striking is the one of identity. Breq is a tiny, splintered part of a much vaster, destroyed intelligence and has difficulties in relating to other people and the world around her. She's also effectively possessing a dead body and suffers from a cultural bias. The Radchaai do not believe in gender differentiation and go to some lengths to keep their gender unclear. The culture defaults to describing everyone in the feminine, resulting in odd moments when a character you've spent a dozen pages mentally picturing as female actually turns out to be male. This playing around with gender roles is not new - Ursula Le Guin did it rather more literally in The Left Hand of Darkness more than forty years ago - but it's something that relatively few SF authors have dealt with before and forces the reader to confront their own biases.

Those looking for in-depth worldbuilding and explanations for this SF universe will be left disappointed. There's little information on the amazingly powerful armour that protects the Radchaai, nor much on how their ships work. FTL travel gets relatively short shrift, and the only hint as to the fate of Earth is a single line about how it's a remote backwater. There is a slight inconsistency in that the Radch's tech level, though impressive, appears to be reasonably believable until someone casually throws it out there that they've also built a Dyson sphere, which seems beyond their capabilities. I daresay that the inevitable future books in the series (yes, there will be at least two more) will reveal more, but in this volume the author is focusing more on the immediate story at hand.

Structurally the book adopts a tried-and-tested technique of alternating between flashback chapters showing what happened to the Justice of Toren and why (and doing a good job of showing how massive events can unfold from the tiniest of causes), and events in the present day. Characterisation is reasonably strong, with Leckie showing how citizens of the Radch differ from one another whilst retaining the same cultural and religious traits. Breq herself is well-drawn, as the ship AIs in Leckie's setting are perfectly capable of having emotions and development (and indeed, Breq's actions are catalysed by what happens to one of her favourite crewmembers).

Whilst a lot of reviews are drawing comparisons with Le Guin, I was also reminded of the works of Iain Banks, particularly in the idea of living ships with their own goals and motivations and how they work when placed in humanoid bodies. What Leckie shares with both authors is more of a fascination with the social sciences than the hard ones, and also a belief in storytelling that also challenges the reader.

Ancillary Justice (****) is one of the most striking SF debuts of recent years. It's not perfect - the restrained prose sometimes risks stodginess and the opening chapters risk an almost Eriksonian level of confusion due to a lack of context for what the hell is going on (though this is still well-handled) - but ultimately the novel evolves into an intelligent take on gender roles and identity issues against a fascinating (if only hinted-at) SF backdrop. More please.

The novel is available now in the UK and USA.
Posted by Adam Whitehead at 10:05