Canadian fantasy author David Keck has given an update on his long-delayed third fantasy novel, The King in Cobwebs, the conclusion of the Durand Col trilogy. 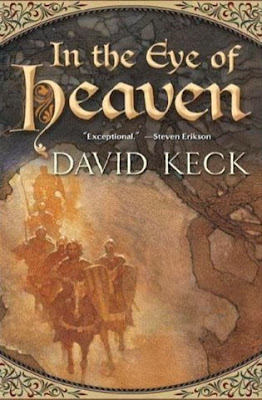 Keck published his debut novel, In the Eye of Heaven, in 2006. It was followed by In a Time of Treason in 2008. The third volume has been repeatedly delayed with updates relatively few and far between.

The new update reveals that Keck is polishing off the first draft now, and will begin editing shortly afterwards. How long these edits will take is unclear, and there is still no final publication date. However, it is major step towards completion and publication.
Posted by Adam Whitehead at 12:32

He lost me already in novel two and such a delay rarely works out. J.V. Jones e.g. and her Sword of Shadows series lost me, the long awaited next volume disappointed me. G.R.R. Martin so far was the only one who kept me reading despite the weak "Feast", "Dance" was IMO better and even more so solved some structural and pacing problems.

Now let's see how Scott Lynch's Locke Lamora does in Republic of Thieves, I have a bad feeling after reading some reviews.