It's the group's third year at Greendale Community College and once again their attempts to get good grades are threatened by their flamboyant Dean, the mentally unstable Chang (now unwisely made part of the college's security force) and a new threat in the form of Vice Dean Laybourne, head of the Air Conditioning Repair Annex, who now seeks to take control of the college for himself. 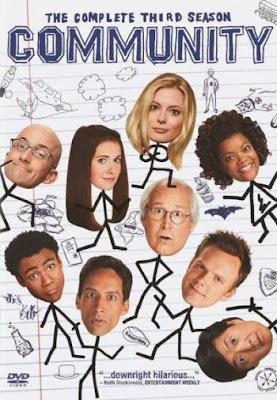 After the second season of Community, which featured an overload of classic, high-concept episodes and an internal battle between the other members of the group and Pierce, it was unclear which direction the third season would go in. For the first couple of episodes, it's clear the producers don't either. The addition of John Goodman (as Laybourne) and Michel K. Williams as Professor Kane are good starts, but it's not until the third episode, Remedial Chaos Theory, that the show hits its former stride again. The Emmy and Hugo-nominated episode, which revisits the same events in six different timelines and cleverly comments on each character's place in the group in the process, is flat-out hilarious as well as being clever, and sets up a couple of recurring elements that are periodically revisited throughout the year.

However, despite this early high point, the third season remains patchy. The decision to tone Pierce down this season results in his near-total absence from many episodes. Without him in an adversarial role, the writers seem to struggle to find something plausible for him each week without him falling back on his traditional (and now rather tired) homophobia and casual racism. There is a potentially promising storyline when Pierce's ancient and even more horrific father arrives in town, allowing the writers to show how the group has made Pierce (relatively) more tolerant and understanding, but even this is under-explored.

In the meantime, we have yet more adventures with Chang being insane, which is getting old. Ken Jeong is funny enough that this - more or less - works, but you can't help feeling it's a bit of a cheap stand-by. Even worse is the decision to make Dean Pelton a regular character. This results in a lot of running gags and very broad comedy based around the fact that the Dean is gay, which feels odd for a series that spends so much time trying to avoid cliches. Having said that, the Dean's battle with his nemesis Laybourne does give the season a dramatic spine and a sense of direction.

Elsewhere, the performances of the regulars remain superb, individual gags are often hilarious and, after taking a back seat in Season 2, character development moves to the fore, with the show concentrating on Abed as an actual character than an ongoing commentary on what's happening in each episode. Annie, Shirley, Troy and Jeff also get good moments of character evolution throughout the season. On the flipside of that, Britta fares poorly, with the slight turn she took into 'dumb blonde' territory in Season 2 now turning into a full-scale character regression (so overt that it's even lampshaded at one point). It's a shame that a character who was an essential foil for Jeff in the first two seasons is now being treated as a hate figure by almost everyone.

In terms of the episodes, Remedial Chaos Theory is the undeniable high point, but other episodes are strong. Horror Fiction in Seven Spooky Steps, in which the gang tell horror stories (so Britta can try to work out which of them is a sociopath-in-the-making) is extremely amusing, especially Abed's remorselessly sensible and logical take on a horror movie narrative. The Ken Burns-influenced mid-season two-parter, which presents an epic blanket fort vs pillow fort war fought across the whole college (complete with detailed, animated maps of the battle lines and commentary from those involved), is another instant classic. Basic Lupine Urology isn't just a great episode, but also a phenomenal mickey-take of the Law and Order franchise (and Michael K. Williams gets to make a few references to his former role as Omar on The Wire, which takes place in the same fictional universe). Curriculum Unavailable tries to recast the events of the entire series with the study group being inmates at a mental institution, a successful satire of unconvincing 'plot twists' in long-running series. Digital Estate Planning, which forces the group to play an 8-bit video game, is almost as good as Remedial, with the video game being used to expose both rifts in the group (not to mention the Christian Shirley's suppressed homicidal streak) and encourage their cooperation as well.

Against this, there's probably a few too many episodes centred around the Dean and Chang, whose broad characterisations don't lend themselves too well to central roles in an ongoing series. There's also the feeling that Community's meta-awareness and commitment to avoiding cliche is too often turned into distinct smugness at its own cleverness. This is most notable in the first few episodes, before it calms down and just gets on with having fun again.

After the third season, Community wouldn't quite be the same again. Showrunner Dan Harmon was taken off the show for the fourth season (though he would return for the fifth) and Chevy Chase would depart in the following year.

The third season of Community (****) is relentlessly entertaining, very funny and often very clever. Where it falls down is not matching it own very high standards and occasionally getting too tangled up in its own desire to be funny whilst avoiding stereotypes, whilst not always having anything new or interesting for the characters to do (particularly Britta, Pierce, Chang and the Dean). But ultimately this is still one of the funniest shows on the air. The season is available on DVD in the UK and USA.
Posted by Adam Whitehead at 16:01