Tor Books have announced that they have signed two new Mistborn novels from Brandon Sanderson. These two books will continue the adventures of Wax and Wayne, who first appeared in The Alloy of Law. 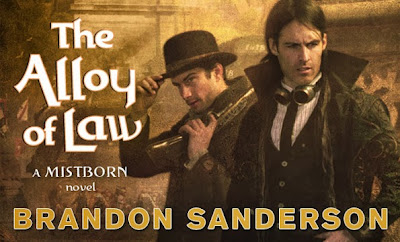 The first of the new books, Shadows of Self, is already partially written and will be published at the end of 2014, with the third book following a year later. Sanderson will continue to write Stormlight Archive novels in the meantime, with the second, Words of Radiance, due to come out in March 2014. Whilst the new Mistborn books will be somewhat self-contained, they will foreshadow the second proper Mistborn trilogy which will be set 75 years after the events of the Wax and Wayne books.
Posted by Adam Whitehead at 16:27

Email ThisBlogThis!Share to TwitterShare to FacebookShare to Pinterest
Labels: brandon sanderson, mistborn, news, shadows of self, stormlight archive, the alloy of law