More than two years have passed since Aidan Pearce and the hacker group DedSec exposed the flaws in the ctOS computer network that had been given oversight over Chicago, creating the world's first "smart city." Unfortunately, the supercorporation that owns ctOS, Blume, was able to spin the defeat as a test run and has since gone global, with more cities joining the network. The San Francisco branch of DedSec uncovers unusual activity in Blume's local office and recruits a new member to help them expose the company's latest malfeasance. 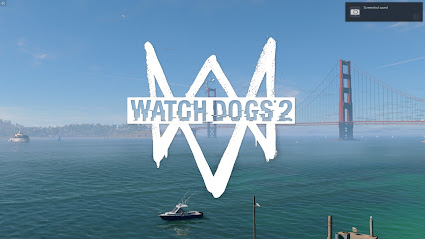 The original Watch_Dogs (2014) was an interesting but heavily flawed game, taking the Grand Theft Auto model - an open world city which you can run around in, completing missions and side-activities to your heart's content - and adding elements to it derived from the Deus Ex series of cyberpunk video games, such hacking, stealth and multiple solutions to any given problem. It had a few distinguishing features of its own - such as using a real city rather than a fictional one and the idea of manipulating the open world itself to help you - but ended up feeling a bit over-familiar and under-ambitious, weighed down by a cliched, grim main story and unsympathetic characters.

Watch_Dogs 2 is very similar to the first game, but it feels like Ubisoft have carefully made note of the criticisms of the first game and carefully thought them through in developing this sequel. The game is Watch_Dogs with most of the rough edges smoothed off, new and interesting ideas added and an altogether lighter air adopted that makes the moment-to-moment gameplay far more enjoyable than the preceding game. The game is still flawed but it is a much slicker, more compelling package this time around. 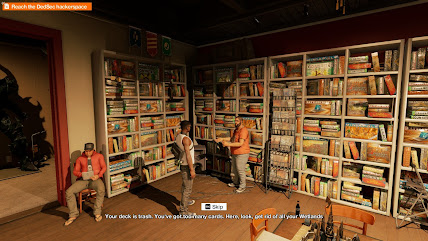 The first good thing is that the game just drops you straight into the action. No introductory cutscenes laboriously establishing your character and his motivations, instead you find yourself standing outside a data centre belonging to Blume as unseen allies talk you through the process of infiltrating. You quickly discover that your name is Marcus and you're a hacker trying to join DedSec. Within a few minutes you're trying out your abilities, learning how to deal with guards and completing your first mission before being thrust out into the world, ready to proceed with the story or just cruise around doing side-activities. The game refreshingly puts few barriers between you and actually playing it, which feels joyously rare for a AAA open-world game these days.

The game also improves on the original by giving Marcus a discernible personality. He's a hacker and a geek but also a chilled out dude. Aidan Pearce's moany whinings are nowhere to be seen and it's fun to roam around the virtual San Francisco with Marcus. He also has a fellow bunch of DedSec members helping him out and they're also enjoyable to work with (DedSec is more front-and-centre in the game, unlike the previous one where Aidan was more an ally of theirs rather than working for them directly): confident street-artist Sitara, deranged punk Wrench, tech worker Horatio and the gifted, on-the-spectrum Josh. They're a great bunch of characters with discernible personalities and some reasonably solid writing backing them up which manages to overcome the "hacktivist" clichés. A couple of Watch_Dogs characters do transition over later on to provide a bit more connective tissue to the first game, but foreknowledge of the original game is not required. 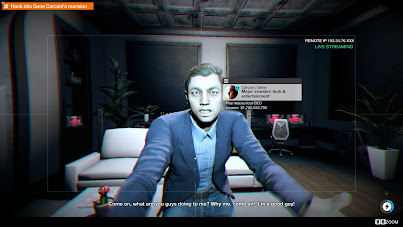 The game's real star is San Francisco and the (somewhat condensed) version of the city in the game is a triumph. Roaring around the Bay Area by car, bike or boat is a genuine pleasure, much moreso than the somewhat morose Chicago of the original game, and Ubisoft have been unexpectedly generous in how much stuff there is to do in the game. You can race eKarts, bikes and drones; you can act as a non-copyright-infringing Uber driver, with some of your random passengers unexpectedly sparking off side-quests of their own; you can meet up with supporters of DedSec with intel on what's going on, which can also transform into elaborate sequences of missions; you can also go hunting for an enormous number of collectables, ranging from the trivial (new car paintjobs and outfits) to the extremely useful (cash drops, new abilities and upgrade points). You could happily spend a couple of dozen hours just doing this stuff rather than following the main story.

The main story, though, is surprisingly fun. Blume has joined forces with a bunch of Valley tech companies (and not quite as on-the-nose 1:1 versions of Facebook and Twitter as you might expect) to use the information from ctOS as a way of making money from the government, military and law-enforcement agencies by essentially breaching international law and the US Constitution. The primary antagonist is Dusan Nemec, a Blume executive with a truly offensive man-bun hairstyle. Dusan is initially a tough opponent, constantly one step ahead of DedSec, but as the hackers expose and halt his plans and build up a picture of his allies and resources, it becomes a more evenly-matched battle. Watch_Dogs 2 improves over its predecessor by established the stakes and the abilities of everyone involved and (mostly) plays fair in how it advances the story. Refreshingly, at no point are you taken prisoner, inexplicably allowed to live and have to escape, which is a Ubisoft cliché by this point. 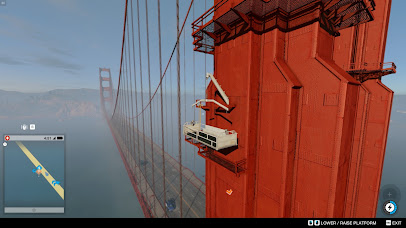 Missions usually involve Marcus being sent to a location, which he has to hack into or gain information. Some missions do require Marcus to be physically present, but a surprising number are wide open and you can approach them by several means: direct combat which is usually the hardest option (Marcus is nowhere near as tough as Aidan was in the first game and can die from a couple of bullets), stealth or remote hacking using radio-controlled vehicles. Marcus gets an RC car early on which can pick things up and hack things through a hardline, as well as later one a quadcopter drone which can only hack things remotely but can fly and reach high places much more easily. Missions get tougher as the game proceeds, but Marcus also unlocks powerful new abilities. Particularly enjoyable is the ability to frame enemies for crimes on the spot or put out a contract on them, effectively calling in police (for the former) or gang members (for the latter) to attack your opponents on your behalf. An impregnable fortress becomes rather more pregnable if you send in police and SWAT forces first to apprehend half the security force on trumped-up murder charges (or, more disturbingly, real crimes that you expose).

This kind of ability raises some ethical questions about DedSec's power: you can also get the police to arrest any random passer-by on trumped-up charges, for example. You assume that they'll be released once the police realise they've been hacked but it raises some questions about the group's honesty that the story itself also touches on, but never really answers. Your group's fury at discovering the extent of Blume's violation of privacy feels a bit rich when you've just had the living statue in the park arrested purely for being annoying. 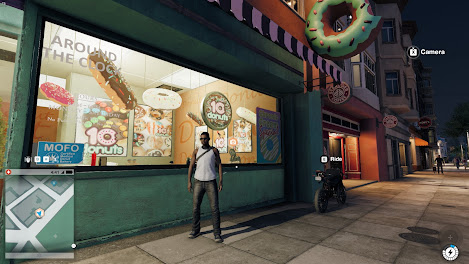 The darker side of this is something the game doesn't even attempt to address in the story. Nothing is stopping you, as Marcus, from strapping up with some heavy machine guns and wading into each mission and massacring everyone in sight: security guards, police, even civilian workers and passers-by. You can remote-detonate gas mains in roads, blowing up cars and killing innocent people. You can drop explosives from your drone into crowded shopping areas, arrange drive-by shootings of random office workers and trigger a full-scale gang war which can escalate into total mayhem with dozens killed in the crossfire. But the story will never, ever acknowledge that you've done these things. DedSec remain the plucky underdog searching for the truth and protecting the public and Marcus is the chipper fighter for freedom, no matter how many people he's killed that day. This disconnect between potential gameplay and story (especially given Blume's desperation to discredit DedSec) is fairly nonsensical and the only way I could resolve it was by adopting a non-lethal playthrough using a stun gun (and, later, stun shotgun) and using takedowns to knock enemies out rather than kill them. Unfortunately, the game doesn't really acknowledge this approach either. Even worse, the game seems to reach to stun shots the same way it does to machine guns, with SWAT teams responding with excessive force in trying to murder you despite you not having actually hurt anyone.

This is where the game's weaker elements kick in. Combat is generally poor. Cover is far too sticky, resulting in more deaths from fighting the cumbersome interface than from actual enemy tactics (trying to get the game to detach Marcus from cover when a grenade lands at his feet is a challenge in itself). Stealth is also poor: enemies can spot you hiding from very unlikely positions and enemies are telepathic, so if one spots you, all of the bad guys in the area know where you are with laser-like precision instantly. With combat and stealth being underwhelming, the game seems to be pushing you to using hacking for almost every mission and it's by far the most rewarding (not to mention amusing) option, but it does feel like Ubisoft missed a trick by not removing the head-on combat option altogether and forcing you to rely on your wits instead. 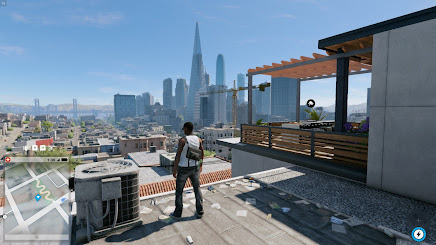 There are other gameplay elements which are odd. The ubiquitous Ubisoft Tower of Knowledge, which you have to unlock to detect all the available activities in a given area (a common element in their Assassin's Creed, Far Cry and Watch_Dogs franchises), is oddly missing, but feels like it should be present. Not only are radio towers and satellite dishes frequently present in the game (now occasionally serving as download points for collectible information), but there is no way of flagging this information on the map. You have to physically drive or walk around and hope you pass close enough to an icon for it to appear on your map. I get why they did this - they wanted to avoid the maps covered in points of interest you then tick off like a robot in their previous games - but with no alternative method in place of finding this information, it just makes the task of locating all these items more laborious. I finished the game with numerous collectibles left incomplete just because there is no way of identifying them, which is weird.

These negatives are annoying, but certainly not a deal-breaker. The story is solid, the characters likeable, the actual game world is overwhelmingly impressive (and will bring back pleasant memories of Grand Theft Auto: San Andreas, something that Watch_Dogs 2 seems to lean into on occasion), the side-activities are hugely fun and the power the game gives you to impact on the game world and manipulate the factions and infrastructure to your advantage is genuinely original and interesting. Open-world games are becoming a bit of a tired genre these days, but Watch_Dogs 2 avoids most of the negatives and delivers a very enjoyable experience. 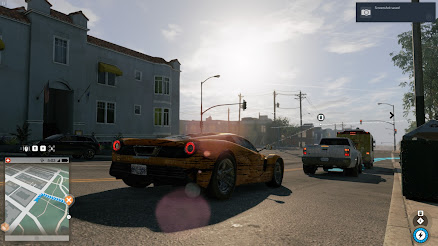 Watch_Dogs 2 (****) is a sequel which takes the original game and improves on it in every single way, as well as bringing more humour and fun to the franchise. Stodgy combat and weak stealth let down the choices somewhat, but the remarkably fun and engaging hacking mechanics do make up for this. The game is available now on PC, X-Box One and PlayStation 4. A sequel, Watch_Dogs: Legion, was recently released.