David Prowse, the actor who originated the role of Darth Vader in the Star Wars films, has sadly passed away at the age of 85. 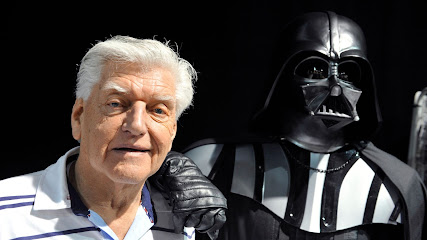 Born in Bristol in 1935, Prowse attended Bristol Grammar School. Due to his unusual height (6 ft 6), he secured a job as a bouncer at a dance hall in the 1950s. He took up bodybuilding as a hobby and became the British Heavyweight Weightlifting Champion from 1962 to 1964. He represented England in the Commonwealth Games in 1962.

Additional roles followed on TV and film, with Prowse appearing in Carry On Henry (1971), part of British cinema's most successful comedy franchise, as well as long-running science fiction series Doctor Who (in 1973, playing a minotaur in the serial The Time Monster). In 1975 Prowse appeared as UK children's road safety warden - a "lollipop man" - in a road safety campaign for the Green Cross Code. He was continue in this role in different TV and poster campaigns for the next twenty years.

Prowse was cast in the role of Darth Vader in Star Wars (1977) by George Lucas, who remembered his imposing stature from A Clockwork Orange. Prowse was clad in the iconic black armour in this role. He also provided the voice for the character on set, but Lucas and the other cast and crew - who nicknamed him "Darth Farmer" - decided his strong West Country accent was not suitable for the imposing role of Vader. To Prowse's disappointment, his voice was replaced by that of James Earl Jones in the finished film.

The role immediately made Prowse very famous. Amusingly, he became one of the first people to propose that Vader was actually Luke Skywalker's father at a fan convention in 1978, something that apparently irked Lucas (although he hadn't finalised that idea himself yet) although Prowse had been joking around and, according to producer Gary Kurtz, "made a very good guess." Prowse reprised the role of Vader in The Empire Strikes Back (1980) and Return of the Jedi (1983) but his poor swordsman skills saw him replaced during the lightsabre duels by sword trainer and choreographer Bob Anderson. Anderson's shorter stature explains why Vader appears hunched over in some of the duel scenes. Prowse did get back in the costume for the scene where Vader picks up the Emperor and hurls him to his death, since Anderson lacked the stature and strength necessary to do so. Prowse was again annoyed to find himself replaced by another actor - Sebastian Shaw - for the sequence where Vader removes his helmet and his true appearance is exposed for the first time.

Prowse continued to do the Star Wars convention circuit, but his well-known grumbling over his sidelining in the original trilogy, being cut out of residual payments for Return of the Jedi due to "Hollywood accounting" and his immense dislike of the prequel trilogy, saw George Lucas ban him from attending official conventions in 2010. Because of these complaints, and advancing age, Prowse was not asked to reprise the role of Darth Vader in either Revenge of the Sith (2005) or Rogue One (2016).

Prowse continued to act and in 1981 appeared in the BBC mini-series version of The Hitch-Hiker's Guide to the Galaxy, appearing as a gangster's bodyguard in which he got to use his actual face and voice to menacing effect. He appeared several times in Star Wars documentaries and reunion films. In 2000 he was made an MBE for his services to charity and road safety.

Prowse announced his retirement from acting and public appearances in 2016, due to age and health issues. He passed away yesterday, with Mark Hamill (Luke Skywalker) among those paying tribute.

As the "man in the suit" of Darth Vader, Prowse helped create the most iconic SF villain of all time. He will be missed.

Email ThisBlogThis!Share to TwitterShare to FacebookShare to Pinterest
Labels: david prowse, memorials, star wars, the hitch-hiker's guide to the galaxy