Why Alan Dean Foster is important to STAR WARS

Earlier this week, it emerged that Disney has been withholding payments to Alan Dean Foster for his work on the Star Wars and Alien franchises. Foster has written multiple, well-received novels and novelizations for both franchises over a period of more than forty years. Payments for Star Wars were suspected in 2015 (three years after Disney took over Lucasfilm) and for Alien in 2019 (when Disney acquired 20th Century Fox). The SFWA took up Foster's case and publicised it. 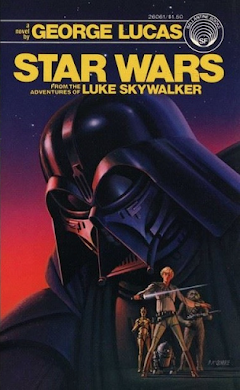 Foster had an influential role in helping market the original Star Wars movie. The film was in pre-production and building up a head of steam, with rumours spreading of elaborate and experimental special effects work and an ambitious shoot planned for the US, UK and the Tunisian desert. Judy-Lynn del Rey, working at Ballantine Books, heard about the project and believed Ballantine would do well to pick up the novelisation rights. Having published Alan Dean Foster's novel Icerigger a couple of years earlier, she believed he'd be a good fit. By coincidence, Charles Lippincott, the marketing manager for the film, was looking for a deal for the novelisation and the two plans converged.
This resulted in Foster being invited to a meeting with Lucas at Industrial Light and Magic's headquarters. For his part, Foster was familiar with Lucas's previous films, THX 1138 and American Graffiti. He and Lucas hit it off and Foster agreed to the writing gig. He was sent the latest version of the film's script and some of Ralph McQuarrie's concept art (some of which later appeared in the novel and on the cover) and set to work.
When it came time to release the novel, it was decided to credit the book to Lucas: the novel was heavily based on the script, using some dialogue verbatim and Foster believed his job was more like a building contractor working on a Frank Lloyd Wright house than an original creator. Despite this, it was widely known that Foster was the writer and George Lucas acknowledged this in his introduction to a later edition of the book. 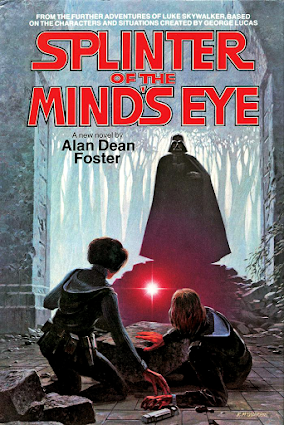 The book was published as a paperback original in December 1976 by Ballantine. This was a full six months before the film was released. By the time the film was released in May 1977, the novelisation had sold a startling 3.5 million copies.
As a result, the book had done a lot of heavy lifting in getting people excited for the film. Readers scoffed at the idea that the elaborate battle sequences in the book could be realised for the film, but were keen to see for themselves. Helped by Charles Lippincott's other marketing ideas, such as the memorable poster by the Brothers Hildebrandt and a Marvel Comics adaptation (beginning three months before the release of the movie), the novel helped drive the hype for the film to huge levels. This was rewarded when the film was released and quickly became the biggest and most successful movie in history to that time.
Foster's involvement continued when he wrote the first original Star Wars novel, Splinter of the Mind's Eye. One idea originated by Lucas is that if the original film was successful but not a huge hit, they could use the novel as a the basis for a cheap sequel. As a result, Foster was asked to reduce elements in the book such as space battles, new creatures and even the role of Han Solo and Chewbacca, since Harrison Ford had not yet signed on for a sequel, but otherwise Foster was allowed to create his own world, characters and story. Published in March 1978 by Del Rey Books (Judy-Lynn del Rey and her husband Lester having set up a new imprint, still going strong today), the book was another huge seller. It has since been retconned as the first work in the Star Wars Expanded Universe and was reissued in the 1990s with some minor revisions to remove elements that clashed with later-established canon. It was also later adapted as a comic. 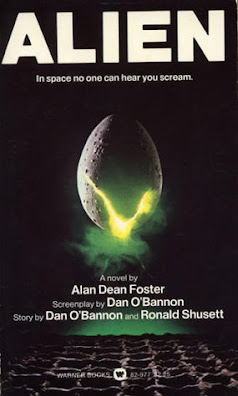 The success of these projects saw Foster contracted by 20th Century Fox to similarly adapt their big, upcoming SF movie. This became the novelisation of Alien, published in 1979. Whilst other writers handled the novelisations of the Star Wars sequels, Fox asked Foster back for more projects, resulting in the novelisations of Aliens in 1986 and Alien³ in 1992.
The role of novelisations has become - arguably - somewhat more redundant over the decades, but back in the 1960s and 1970s, they played a key role. Before films were widely available to buy or rent on video, a novelisation was often the only way for a fan to experience the story again. Novelisations were also frequently published months ahead of the film, helping build up hype and awareness of the film in a pre-Internet era. Novelisations were also able to get across information from the script that may not have been mentioned in the film. Infamous scenes cut from the films, such as Han Solo meeting Jabba the Hutt in Mos Eisley; Ripley discovering Captain Dallas being turned into a xenomorph egg; and the smartgun scene from Aliens, all first appeared in the novels decades before they turned up in the "special editions" and director's cuts of the films themselves.
In this manner, Alan Dean Foster played a key role in spreading awareness of two of the biggest SF movie franchises of all time. His novels also gave people a way of enjoying the story again and again, and gave vital background information on the story and world that was not available in the films themselves. He has more than earned his pay from the big mouse corporation.
As well as his work on the big franchises, Foster has a large number of novels in his own worlds, particularly the epic fantasy Spellsinger sequence and the SF Humanx Commonwealth series. He has also published many stand-alone novels, most recently Relic (2018).
Posted by Adam Whitehead at 16:57

I remember reading Splinter of the Mind's Eye before The Empire Strikes Back came out, and so I had a whole other vision of Star Wars where Vader is not Luke's father and Luke and Leia are not sisters. I can't speak to the quality of that book after so long, but when I did watch classic Star Wars I was a little disappointed. It's more literary and psychological to have the father and son dynamic, but without expecting that going in I would have been happy with Vader being unredeemably evil and having Luke overcome having a big boss fight.

I really hope that Disney gets forced to pay in court. If not, it would set a precedent that all you have to do is sell the rights to something and any contractual obligation to its creator gets completely voided. It would quickly put us back in the 1800s, where authors got paid once of a work and then never again no matter how rich thei9r publishers got off of it. There would be absolutely no reason for large publishers to not trade the rights to properties back and forth, and cut authors completely out of the loop.

And I completely missed your post about that exact issue yesterday :-)

I’d credit Alan Dean Foster’s movie novelisations are what got me into reading Science Fiction in the seventies. I read many of them. I will always be grateful for that.