Rania has moved from the countryside to the sprawling city of Nivalis and has taken a job working for Cloudpunk, a not-quite-legal delivery company. As her first night begins, she is directed to deliver packages and goods. She meets some unusual people and gradually discovers the secret of the ancient city's failing computer systems, and is put in the uncomfortable position of having to make choices that will impact on people all over the city. It's going to be a long night. 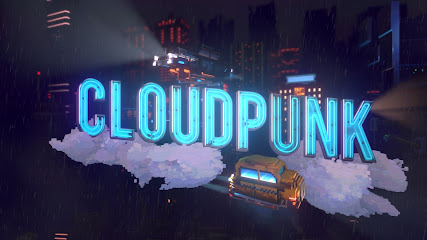 Cloudpunk is an indie game created by the Berlin-based studio Ion Lands. It's a highly impressive piece of work with a distinct visual style that is constantly engaging and attractive, although the depth of the gameplay is perhaps not quite as compelling. 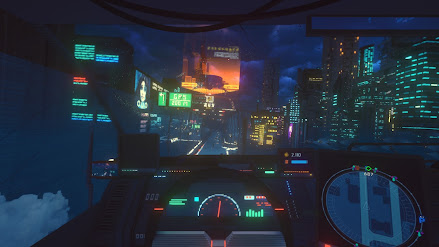 The game is set in an open world city, which is the true star of the game. Nivalis sprawls for many kilometres, divided into discrete zones, and flying your hovercar around the city never gets old. You can loop through immense streams of traffic like Coruscant in the Star Wars movies, or abandon the sky roads and make your own way along, over and under the city. The city is divided into roads and neighbourhoods which you can visit and explore on foot. Setting down at a car park (you can't just land anywhere), you disembark and can explore in either a first-person or third-person perspective. 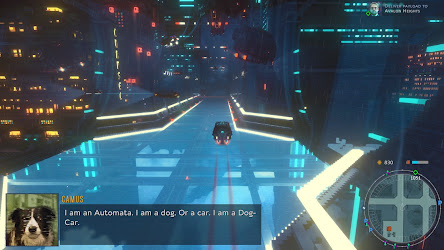 The game's aesthetic is somewhat blocky - the game is built using voxels rather than standard polygons - and up-close in the foot sections it looks a bit like someone's fused Blade Runner with Minecraft. This highly stylised aesthetic is not something I'm usually a fan of, but Cloudpunk makes it work well and I came to enjoy exploring the low-fi back alleys of the city. The streets are packed with people, although there's only a few you can interact with (represented by faces on your map). These random people met by chance can open up new storylines or even missions, so it's worthwhile talking to everyone you can. There's also loot and collectibles lying around, such as used batteries, punchcards and old magazines. These can be sold for cash, used to repair broken equipment (such as elevators, opening up new areas) or can be given to specific collectors in return for story advancement or achievements.

There are a few things to spend money on, such as repairs (you'll spend your first few minutes likely flying into walls, a lot, before you get a handle on the game's somewhat stiff flight controls) and fuel, as well as a small number of upgrades for your hovercar and your apartment. 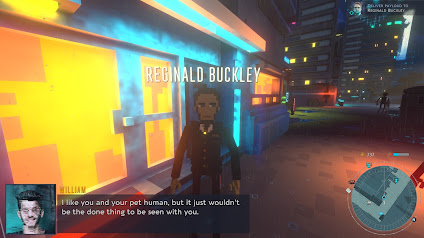 These side-activities are fine, but for the most part ignorable. The game's main storyline is its key appeal and this is quite compelling. Over the course of one arduous night - played out in approximate realtime, since even a completionist run of the game will only take you around ten hours - Rania learns something of the history of the city, gets embroiled in a film noir story involving a hardbitten private detective searching for a missing girl, inadvertently attracts the attention of the cops, indulges in some light corporate espionage and fraud and helps an android recover her missing memory files, which have been scattered all over town. Along the way, Rania makes some friends: a snobbish married android couple, a robot detective who only speaks in third-person gumshoe narration and a deranged butler are only a few of the characters she picks up in her cab. Her main points of contact are her call handler at work, who directs her from behind the scenes, and her sentient AI companion, Camus, who used to be in a synthetic dog body but is now plugged into her car, resulting in an existential crisis.

This is all good fun, though perhaps a little grating (Camus's schtick - a car-dog! - is fun for about an hour and then starts getting repetitive) in the long run. The writing is fine, but the voice acting is highly variable. Rania and Control, who fortunately have the bulk of the dialogue, are decent, as is the detective, but a lot of the rest are forgettable to amateurish. 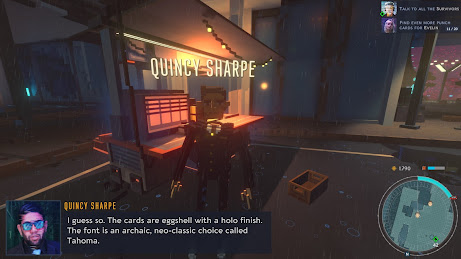 The core gameplay loop is reasonably enjoyable. Control contacts you with a mission, which usually involves picking something up and taking it somewhere else. This involves exploring a new area on foot and the game's natural pace of advancement means you can do several things simultaneously, such as tracking down loot and collectables in the same neighbourhood where a mission is unfolding. This approach avoids repetition by both giving you better upgrades, so driving between locations becomes easier and faster as the game unfolds, and also varying events in the story, such as some later missions being timed, or taking you off the grid to old or sealed-off parts of the city. Some missions also have multiple outcomes, with Rania being able to make a choice that will determine what happens later on. For example, I befriended an ageing speed racer who wanted to keep racing, despite it becoming dangerous. Rania has the ability to sabotage his next race and encourage him to retire, or help him keep driving. The former saves his life but makes him angry and resentful; the latter sees him die, but doing something he loved and this encourages his friends to later help Rania out of a tight jam. There's probably not enough of these choices to make a full replay of the game worthwhile to see the other outcomes, but maybe enough to make you check out a YouTube playthrough. 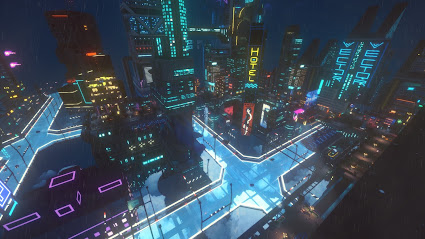 After about nine hours the game does start to wear a little thin, but it's around that time the main story starts wrapping up. After a reasonably good ending, you're still able to explore the open world and pick up any remaining loot and track down a last few people with interesting things to say, but the game wraps up well. I do think any sequel will require more gameplay ideas to keep things fresh, though. In the meantime the developers are promising adding new stories, missions, characters and features (such as street racing) which should make revisiting the game a few months down the line interesting.

As it stands, Cloudpunk (****) is a fun, tight and focused adventure game in a beautifully-realised cyberpunk city with some fun characters. The gameplay perhaps doesn't vary too much, but it doesn't outstay it's welcome and it's refreshing to play a game which doesn't rely on violence or action set pieces to get the player's attention. The game is available now on PC, X-Box One, PlayStation 4 and Nintendo Switch.