AD 3015. The Inner Sphere is gripped by the Third Succession War, with the great powers clashing for control of human space. With the regular armies of the Great Houses stretched, it's a time of opportunity for mercenary companies to make money and gain a reputation for themselves. 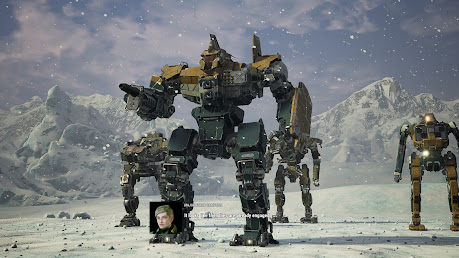 Is there much more we can ask from video games than the ability to jump in a giant robot and use the giant robot to destroy other giant robots and occasionally just smash up a city for the sheer hell of it? It could be argued not, and, since 1989, the MechWarrior series of video games has satisfied that urge in a very enjoyable manner.

MechWarrior 5: Mercenaries is the first single-player game in the series since 2002 and makes a ton of concessions for new players. It is set earlier in the timeline than any previous game and does not require foreknowledge of the wider BattleTech franchise. However, if you played the outstanding 2018 turn-based strategy game BattleTech (to which this is a real-time companion), you'll find a lot here that's familiar in terms of mechs, terminology, equipment and even UI, especially the menus and the systems for outfitting your mechs. MechWarrior 5 is also somewhat more forgiving than its brutally tough cousin, despite also being a lot more hectic. 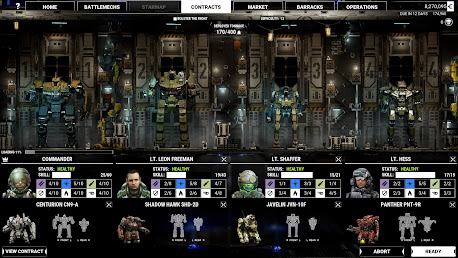 MechWarrior 5 consists of two game modes. The first has you on board a Leopard dropship, where your mechs and mechwarriors are based. You can wander around the ship in first-person and explore the ship and inspect your mechs at the correct scale, which is very impressive. For certain campaign missions and story moments, you can also wander up to characters to engage in conversations which further the story. Using menus you can also select your next mission, move the ship to another system and engage in equipment and mech purchase, maintenance and selling. You can also hire and fire pilots or review your progress so far. This is similar to the metagame in BattleTech, although the ability to actually walk around the ship is cool for a bit; it later becomes a bit pointless and you can do everything through menus instead. There's also much less character here. In BattleTech you could talk to characters, even upgrade the social features of the ship to make your pilots happier. In MechWarrior 5 there's somewhat less to do other than selecting missions and maintaining your war machine.

Once you arrive at a star system with contracts available, you can choose which mission to take and then engage in negotiations with the faction in question. You can discuss pay for the mission, how much salvage you can claim and insurance for mech damage. There's some gambling here, since salvaging an enemy mech could net you several times the pay for the mission, but that only applies if you can disable an enemy mech without blowing its reactor, so upping the hard cash reward for the mission might be preferable. The more jobs you do for a faction, the more negotiating points you can get as your standing with them improves. However, sometimes a faction may direct you into combat against another faction, resulting in a corresponding drop in reputation with that faction, which might become a problem later on when you need that faction to give you more jobs. This system is fun and makes choosing which missions to take on and who to appease and who to annoy a rewarding and interesting system of choices. 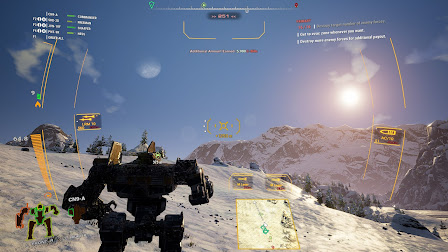 Once a mission is locked in, the Leopard lands and deploys your lance of mechs into real-time combat: you can bring up to three fellow mechs into combat with you, which can be controlled by AI or other human players of your choosing. Sometimes the dropship dumps you straight into a mass firefight (with the dropship laying down impressive volumes of covering fire) but more often it drops you outside a combat zone and you have to head in, perhaps using the terrain for cover, going the long way around to take the enemy by surprise or just charging in all guns blazing.

Combat is fast, furious and frantic, but you have a good amount of feedback thanks to a radar and robust damage report models for your mechs plus the enemy and allied troops. You can be more tactical and hold back with a sniper mech to attack from a distance with gauss guns and long-range missiles, perhaps directing your more brawler-focused allies into close combat, or vice versa. Like a good space or air combat game, the game mixes real-time action and a more strategic element of commanding allies; MechWarrior 2 (the game that popularised the franchise) was consciously echoing contemporaries X-Wing and Wing Commander but in a giant robot, and MechWarrior 5 feels like a solid upgrade of that, feeling like a contemporary of Ace Combat 7 and Star Wars: Squadrons (but still in a giant robot). Combat is something the game nails very satisfyingly, which is important as you're going to be doing a hell of a lot of it. 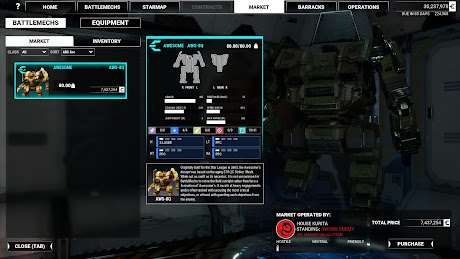 The game provides context for what you're doing through three tiers of missions. The first is story missions, which propel the game's main storyline forward. The storyline isn't fantastic (and certainly not as good as BattleTech's) but it does have some solid voice acting from Elias Toufexis  (Adam Jensen from the Deus Ex franchise) and it does have some excellently-designed mission setpieces. These missions are triggered intermittently when you gain reputation levels. There are 15 such levels in the game and you gain rep from completing jobs for factions. Once you get to a new level, new story missions appear and you can get those underway.

The second tier of mission is quests, marked on the map by yellow circles. These are, effectively, side-quests with their own storyline and characters, along with unique dialogue, with quite large reputation and cash rewards. These questlines take you back and forth across an entire warzone with twists and turns in the story, and sometimes the ability to switch sides and work for the opposition who may contact you with a much better offer. Quests are not necessary to proceed, but bulk out the game in terms of giving you meaningful stuff to do. 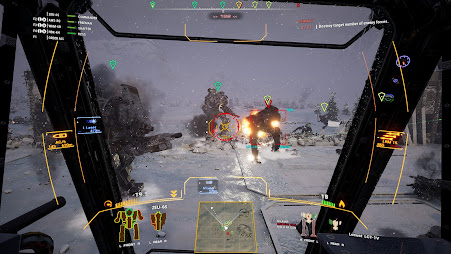 The lowest tier are procedurally-generated missions which are simply infinite in number, randomly generating rewards, opposition and terrain and throwing you into battle. These missions are good for picking up salvage, cash and grinding smaller amounts of reputation, though for those who want to make faster progress, quests are a better bet.

These combine into a fairly compelling experience: you do missions to increase reputation, salvage and cash; you spend those resources to improve your pilots, mechs and equipment; and then you unlock the next part of the story and move on. You can complete MechWarrior 5 in around 30 hours (roughly half the length of a BattleTech campaign) but also expand it out for much longer than that as you track down rare mechs and equipment and exhaustively try to complete every quest chain in the game. 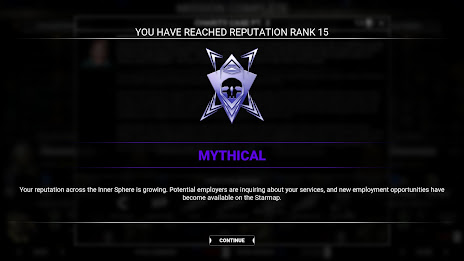 So, with great combat, the ability to co-op every single mission and solid upgrading and loot mechanics, it'd be easy to recommend the game unambiguously. However, there are a fair few problems with the game. None of these are massive by themselves but the accumulated array of them can be fairly vexing.

The first is how fresh enemy mechs are spawned mid-mission. Originally they appeared out of nowhere way too close to your lance, resulting in damage and mission losses for no apparent reason. Patches improved this by making the enemy appear a lot further away, but it's still a disconcerting experience that feels a bit weird. 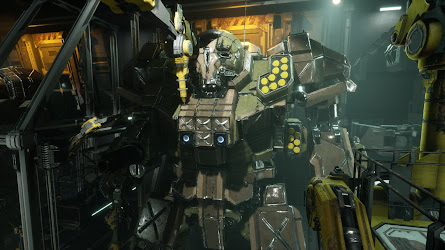 The second is that your radar works in the weirdest way imaginable, with it working based on line of sight. So you have to see something before your radar can lock on, with enemy mechs vanishing from view if they just pass behind a boulder for a few seconds. Even worse is the low range of your radar, with you sometimes able to see a bunch of enemy mechs a couple of kilometres away and even hit them with dumb-fire weapons (like gauss guns and plasma cannons), but not able to actually lock onto them with missiles until they're much closer. This is all pretty dumb, and a let-down on how radar worked in BattleTech, where you could use sensor abilities to target enemies from much further away and you could also use telemetry feeds, so one scout mech on a recon mission could allow all your troops to lock on from much further away.

The third is that AI in general could be a bit stronger. The enemy default stance is to bum-rush you, sometimes allowing you to wipe out what would be a formidable enemy force because their light mechs outrun their heavier support, allowing you to destroy them piecemeal as they arrive. Enemy AI also seems reluctant to use long-range weapons or jump jets. Allied AI can also be ropey, particularly in base defence missions where you allies sometimes careen through allied structures without a care in the world (resulting in amusing screams of rage from your employers) and happily discharge their plasma cannons and missiles at the enemy even if you're standing right in front of them (which can be fatal). 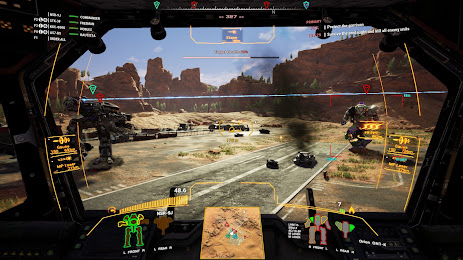 These problems are annoying and frustrating but - very happily - they've also mostly been fixed by MechWarrior 5's outstanding modding community. As I related previously, I installed a number of mods which fixed almost all of the above problems instantly. Better Spawns removes random mech spawns altogether and replaces them with an enemy dropship arriving and dropping the mechs manually. The AI fix mods make both allied and enemy AI much stronger, so your allies stop shooting you and blowing up allied bases and the enemy will use missiles and jumpjets from time to time. The 3D Hud dramatically improves weapons and damage feedback. Max Tonnage removes the very arbitrary-feeling weight limits on missions that feels nonsensical (given that enemy spawns seem to be based on your tonnage, this doesn't make the game a cakewalk either), and the JumpShip Animation dramatically speeds up the game by removing unskippable cut scenes. The only outstanding problem is the radar, which apparently will be addressed in the forthcoming expansions.

MechWarrior 5: Mercenaries is available right now on PC via Epic Game Store, which easily allows for modding, and on the Xbox Game Pass, which very much does not. The game will launch on Steam on 27 May alongside a new expansion, Heroes of the Inner Sphere, and an Xbox One/Series X version of the game.

I played a lot of Mechwarrior 4, back at fin de siecle. I vividly remember some weird bugs that forced me to re-install the game each time I would play it.

Also, most frustratingly, delivering a killing blow at point blank range would deal significant damage to your own mech instantly, even though it took a few seconds for the enemy mech to actually fall over and explode.

Did you play 4, Wert? How do the gaming experiences compare?

No, I completed MechWarrior 2 and then BattleTech. No idea why. I own 3 and tried to play it a few times but it never clicked for me, so bypassed 4 altogether.

I'm going to have to give this one a try.

Thanks for the review and the list of recommended mods!

Give me VR and I'll happily put down the cash. MW3 was revolutionary, MW4 was entertaining. We waited too long for MW5 and now it has to bring something new to the table