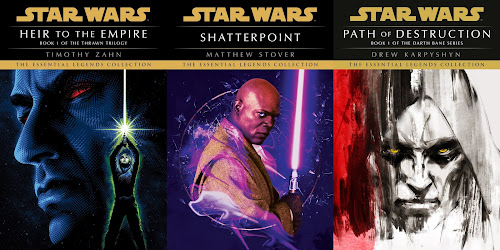 The first three books in the range are Heir to the Empire (1991) by Timothy Zahn, Shatterpoint (2003) by Matthew Stover and Path of Destruction (2006) by Drew Karpyshyn.

Heir to the Empire was hugely important as the first Star Wars novel to launch the Expanded Universe fiction line (although a number of 1970s and 1980s-published novels were later retconned and in some cases rewritten into the line). The novel, set five years after the events of Return of the Jedi, introduced the iconic characters of Grand Admiral Thrawn and Mara Jade, the Emperor's Hand, and introduced factions and ideas such as the New Republic and the city-planet of Coruscant. It was the first novel in The Thrawn Trilogy. The new cover art is by Tracie Ching.

Shatterpoint, sometimes cited as the best-ever stand-alone Star Wars novel, focuses on the character of Mace Windu and sees him tracking down his missing former padawan shortly after the outbreak of the Clone Wars. The novel was highly praised for giving more texture and depth to Windu than his fleeting appearances in the prequel trilogy films. The new cover art is by Jeff Manning, with a brand-new, unabridged audio adaptation by Sullivan Jones.

Path of Destruction, the first book in the Darth Bane series, tells the story of Darth Bane, the Sith Lord who restructured and reorganised the Sith following millennia of defeats into their later "Rule of Two" incarnation. The cover art is by Simon Goinard.