Baltimore, 1880. Seventeen years have passed since the dead on the battlefield of Gettysburg rose, sparking a plague that has torn America part. The Confederacy has surrendered and accepted equality...on paper. In reality, the southern states (and even some of the northern) have liberated former slaves only to turn them into soldiers, cannon fodder to fight the undead menace. Jane McKeene, trained at Miss Preston's School of Combat, is destined to become a babysitter for the wealthy and privileged, until she discovers that people in Maryland are going missing without explanation. Her investigation uncovers a conspiracy with far-reaching consequences for the fate of the Union, and for herself. 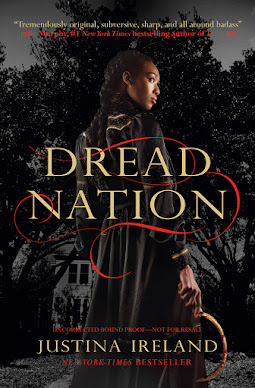 The American Civil War remains the bloodiest conflict fought in American history, its outcome still debated and contentious a hundred and sixty years later. It has been used before to spur SFF novels. Several of Harry Turtledove's novels have delved deep into "what if...?" scenarios where the consequences of a Southern victory are assessed (unsurprisingly, things do not go well), whilst the Deadlands franchise of tabletop games and novels has explored the consequences of a supernatural schism taking place on the same day as the Battle of Gettysburg.
Dread Nation starts from the very same premise and likewise explores a world where the full reckoning of the recent human catastrophe has taken a back seat to the supernatural menace, including the rapid onset of steampunk technology to aid in the fight against the undead. But the book has a different tone, as Ireland uses the premise to explore complex racial issues and politics whilst always keeping an eye on delivering a gripping narrative.
After a slightly slow start, Dread Nation quickly catches fire and never lets up. The book is fearlessly inventive in how it uses its alternative history and supernatural trappings to explore real sociological and historical issues whilst also delivering satisfying characterisation. Jane McKeene, our protagonist, is complex and has an interesting background, whilst also being intriguingly flawed. Jane is something of a hothead who has issues making short-term sacrifices for long-term gains, and the novel partially explores how Jane becomes more strategic in her thinking, both in how to deal with the undead but also the considerably nastier human foes she encounters during her adventures. The book has several other major characters, explored through Jane's eyes, such as her frenemy Katherine, a rival at school who reluctantly becomes an ally when they agree to team up to investigate a mystery.
The novel is a fine action story as well. There's satisfying fight scenes and some solid zombie killings (a full-scale battle between a town's worth of defenders and a zombie horde is the highlight here). Ireland solves the age-old question of "fast or slow?" by deploying both kinds, and there's some nice background on how America has adapted to the presence of the undead although, at least in this first volume, there is no explanation for the origin of the threat.
The richness of the novel is let down a little by its villains, who feel a bit "generic Stephen King bad guy," being corrupt sheriffs and fire-and-brimstone racist preachers. They get the job done in providing numerous obstacles for Jane and Kate to overcome, but occasionally risk becoming caricatures.
Beyond that minor hiccup, Dread Nation (****½) is a rewarding, fast-paced story which combines real history and events with zombies to create something that is compelling reading. The book is available now in the UK and USA. A sequel, Deathless Divide, is also available.
Posted by Adam Whitehead at 14:49