Death comes to us all. When he came to Mort, he offered him a job. Mort is taken aback to find himself a trainee Grim Reaper, and puzzled because Death does not seem likely to retire or, well, visit himself. But, it turns out, after several million years on the job, Death would like a night or two off to let his non-existent hair down. What could go wrong? Well, as it turns out... 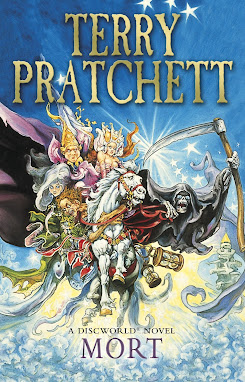 A reviewer more fully embracing of cliche would, at this juncture, feel inspired to say "This is where the fun begins," or look moodily into the middle distance against swelling orchestral music whilst declaiming, "S--t just got real." Mort, the fourth Discworld book, is generally accepted as the book where Pratchett finally nailed it. For many years it was the most-recommended entry point to the series, whilst it's also (by far) the easiest of the books to put on as a stage play. In 2003 it was voted as the best book in the series by the UK's "Big Read" survey. It's also been optioned for film several times, although Pratchett was always dubious of the idea after the first Hollywood producer he met told him how much he loved the book, but perhaps they could find some way of removing Death from the story?
Mort is radically different in tone and feel from the first three books in the series (or the next few, for that matter). It's a hugely concentrated story with only a few major characters: Mort himself, Death, Death's adopted daughter Ysabell (expanding on her brief appearance from The Light Fantastic), Death's manservant Albert, and a small number of characters in the kingdom of Sto Lat, including Princess Keli and the wizard Cutwell. The plot is straightforward: Death hires an apprentice, but doesn't quite take into account that a mortal human's view of the process of ushering souls into the next life isn't going to be as philosophical as a millions-of-years-old, non-human anthropological manifestation and Mort, unsurprisingly, makes a Bad Decision and spends the rest of the book trying to fix or avert it before Death can find out.
The result is a book that is very funny - we learn that Death is a huge fan of cats and curry (not together, fortunately) and has a kind of wistful curiosity about mortal life - but also surprisingly melancholy. It's a book that's about, well, death, which means it's also about life and the transitory nature of it. Pratchett does gentle, melancholic and intelligent humour very well but it seems to be something that almost every single adaptation misses out on, instead focusing on the zany out-there fantasy shenanigans (and admittedly Pratchett can do that really well as well, but it's not his focus). On a first read Mort works well as a reflective, funny novel but it gains additional kudos if you've read Soul Music and Hogfather and know more about the fates of some of the characters in this book.
The book is lean and focused, and also has a really satisfying, poetic ending. Pratchett's endings so far have leaned towards widescreen spectacle because that's what's expected in a fantasy novel - the plucky heroes making a one-in-a-million gamble to try to avert gibbering horrors breaking through the walls of reality - but you get the sense his heart was never really in it. In Mort he goes for a much more personal, character-based ending that's much more appropriate. Oh, there is still a supernatural swordfight of course. Some things are expected.
If there are negatives, they are fairly limited. This is still Early Pratchett, without quite the best-in-class wordplay and more incisive humour and characterisation of later books, but he's definitely getting there at a rate of knots.
Mort (****½) is Pratchett stretching his creative muscles, trying a different tack and finding a mode of storytelling that's exceptionally fine. The novel is available in the UK and USA.
I previously reviewed the book here.
Posted by Adam Whitehead at 12:04