This is actually a couple of months late, but probably close enough. George R.R. Martin recently passed the milestone of being a published author for fifty (50) years. 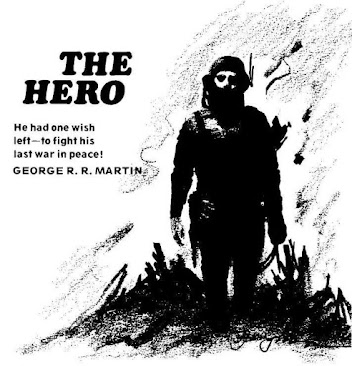 Martin's first professionally-published story was "The Hero," a story from his Thousand Worlds space opera setting. It was published in the February 1971 issue of Galaxy Magazine, though he'd written it in 1968-69 when he'd made his first serious push to become a published author. This period also resulted in "The Added Safety Factor" (eventually published in 1979 as "Warship"), "The Fortress" (eventually published in 1985 as "Under Siege," no relation to the Steven Segal movie), "And Death His Legacy" and "Protector." Martin's earlier writing had been for fanzines and comic books. In fact, his very first-published material of any kind was a letter to Stan Lee and Jack Kirby printed in Fantastic Four #20 (August 1963).

"The Hero," though, was the first of Martin's stories to see print and kick-started a run of early, promising fiction that eventually culminated in his Hugo Award-winner "A Song for Lya" (1974). Additional, multi-award winning fiction followed, including the Hugo and Nebula Award-winning "Sandkings" (1979) and Hugo Award-winning "The Way of Cross and Dragon" (1979), along with his novels Dying of the Light (1977), Windhaven (1981, with Lisa Tuttle), Fevre Dream (1982) and The Armageddon Rag (1983), the commercial failure of which triggered a sideways career movie into film and television scripts. Martin spent years working in Hollywood on TV shows including The Twilight Zone and Beauty and the Beast, whilst rebuilding his novel career through Tuf Voyaging (1987) and working as the creator-editor of the popular Wild Cards series of superhero anthologies (starting in 1987 and continuing to this day).

This year also marks the 30th anniversary of Martin starting work on his wildly popular Song of Ice and Fire book series (later adapted by HBO as the phenomenally successful if-controversially-ended TV show Game of Thrones). Although A Game of Thrones (1996) wasn't published until five years later, Martin began work on the novel in the summer of 1991 when he was struck forcibly by the image of a young boy being taken by his father to see a deserter being executed in the snow. At the time he had no idea whether this was the idea for a short story or a novel, and certainly no idea it would be the start of a magnum opus that would still be running three decades and just shy of 100 million book sales later.

So happy anniversary to George for a full half-century in the business.

Congrats on the 10 year anniversary of finishing Dance as well! My recollection is he announced Kong was dead in April of 2011.