There was an eighth son of an eighth son who became, as is right and proper, a wizard. But, in defiance of tradition, he also had seven sons. And then another one: a source of magic, a sourcerer. The Discworld hasn't seen a sourcerer in thousands of years, since the Mage Wars almost destroyed the world. Soon enough, the re-energised wizards of the Disc are engaged in all-out warfare and the Apocralypse - the teatime of the gods, the return of the frost giants and so forth - draws nigh, provided the Four Horsemen can get out of the pub in time. It falls to a wizard who can't do magic, a might barbarian warrior with three days' experience, a timeshare genie and a homicidal hairdresser to save the day. 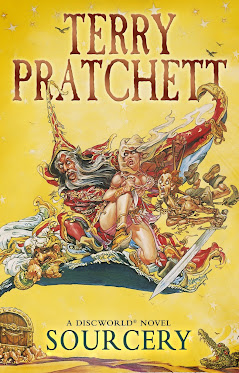 Sourcery, the fifth Discworld novel, feels like Terry Pratchett engaging in a reaction against his previous novel, Mort. Mort was a narrow-field, focused and character-based tragicomedy, and easily the best Discworld book out of the initial quartet. It seems like Pratchett may have reacted a little bit against that and turned the subsequent novel into a widescreen epic, arguably the most epic Discworld has ever gotten, with various groups of mages fighting magical wars spanning continents and prophesised destinies being fulfilled.

There's a certain guilty pleasure to this. Pratchett is reasonably entertaining at large-stakes action, especially when it's delivered alongside a broad sense of humour. I suspect in the heart of many authors there's a yearning desire to break out vast magical towers that explode and mighty-thewed barbarian warriors smiting legion of disposable extras with a broadsword so huge it had to be forged with a gantry, and Pratchett does that with aplomb. The sly wit and intelligence of Mort has been sidelined here in favour of much more obvious jokes about barbarians and Grand Viziers twirling moustaches villainously (the sequences in Al-Khali - fortunately only briefly - flirt with Carry On movie levels of stereotyping).

The book adds surprisingly little to the greater Discworld mythos, which is weird given how massive and world-girdling the events are. A line at the end of the book that the memory of these events has been magically removed from the world feels a bit too cheesy; given the dangers the wizards unleash here, it's implausible they wouldn't be chased from civilised society (well, society at any rate), which is why I guess Pratchett decided to jump through some hoops to reset things to a status quo later on. The only lasting impacts are the fate of Rincewind - which sets up the novel Eric - and a larger starring role for the Librarian. We also get a bit more information on the Patrician and his pet dog, Wuffles, who recur later on, even though the Patrician is still a long way off from the peak of his characterisation.

Sourcery (***) is arguably the weakest of the first five Discworld books. It's Pratchett at arguably his broadest and least intellectually vigorous, going for surprisingly cheap laughs. There are some better gags (the One Horsemen and the Three Pedestrians of the Apocralypse) and Rincewind, never the deepest of Discworld characters, get some decent development here, but overall it's a fairly disposable book and not a patch on the novels on either side of it. The book is available now in the UK and USA.

I previously reviewed the novel here.