The great nation of Ravka is troubled by war with her neighbours and by the Shadow Fold, a mysterious force of darkness which has cut off the west coast from the rest of the kingdom. Only the Grisha, the magic-wielding servants of Ravka, can cross the Fold in safety. A young mapmaker, Alina Starkov, is recruited to help such a crossing but she manifests the powers of the Grisha along the way. Recruited into the order, Alina discovers she has the power to summon light, the power to perhaps destroy the Shadow Fold forever...and a power that some will do anything to possess. 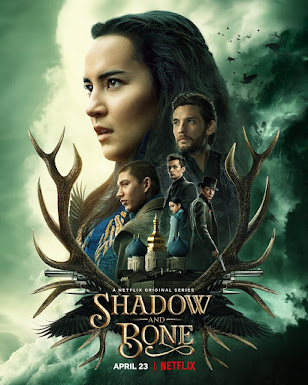 Shadow and Bone is a Netflix fantasy TV show based on the Grisha Trilogy by Leigh Bardugo, a highly successful YA fantasy series originally published in 2012-14. The trilogy was enjoyable, if a bit lightweight, but veered towards the traditional and predictable. By itself, it's questionable if it would have been picked up for adaptation. However, Bargudo followed up the trilogy with two further duologies which dramatically expanded the scope and scale of the world, introducing many more interesting characters, locations and factions.

For the TV show, the writers have made the decision to incorporate characters and backstory from the sequel duologies into the events of the original narrative. Thus, as well as the struggle between Alina Starkov and the Darkling, we also meet the band of ne'er do wells known as the Dregs, or Crows (from the Six of Crows duology) and the character of Nina, who plays a key role in both that duology and the current King of Scars series.

This has the benefit of giving the story a lot more meat to its bones. By itself, the Shadow and Bone novel would have perhaps had enough material for four hours, maybe five, but the other subplots allow it to extend to eight reasonably well (even if there is a fair bit of portentous wheel-spinning in the final two episodes).

On the negative side of things, it does result in a fair bit of narrative dissonance: the three main plot threads (Alina, the Crows and Nina) have very little to do with one another across the episodes, and there's a distinct fanfiction-y feel whenever Alina and the Crows' storylines cross over. Nina and her decidedly thin narrative (which is a fairly odd tale of kidnap followed by Stockholm Syndrome romance) feel like they could have been ejected from the series with no problem whatsoever and introduced later on when more relevant to the plot. Certainly keeping the Crows involved, no matter how contrived it feels and how much their heist hijinks clash tonally with Alina's Chosen One narrative, is a good idea because they're the most fun characters in the series and bring a lot of energy to proceedings.

The actors all do a reasonable job (Jessie Mei Li is probably the standout, which is great as she's playing the protagonist, and The Punisher's Ben Barnes is pretty good as the antagonist), the pacing is pretty good and the sets and costumes are appropriately lavish. However, there's a distinct "Netflix house style" that's been pervading their shows for a few years now which this series definitely suffers from. The CGI is competent, but overly-digital, with a fairly fake sheen that often took me out of the show (doing flashy effects these days is easy; seating the effects in the environment so it looks like people can see and react them is much harder). The most impressive sequences are those in the Fold and involving the Volcra, but given those scenes rely on darkness for maximum impact, that's not as outstanding as it may sound. There's also a distinctly Netflix-ish thing going on of filming too many outdoor scenes on unconvincing indoor sound stages like it's a 1960s episode of Star Trek. The musical score is also surprisingly bland, and the show even lacks a title sequence: instead we just get a brief title card like it's a 2007 big network show urgently trying to keep as much time open as possible that would otherwise be lost to the credits and adverts.

The series also has its own tonal issue. It's based on YA material and for most of the TV version it leans into that (limited swearing, no sex or nudity), but it'll then pull off some scenes of ultraviolence that wouldn't be out of place on a HBO drama (someone needs to tell TV writers that decapitations are not as common as they'd like to think). It's odd because without just a few shows of brutal deaths, the show would be suitable for 10-year-olds, and genuine family-friendly fantasy is thin on the ground these days.

But the negatives feel like they're more than balanced out by the positives. Alina's relationship with Mal, the weakest part of the trilogy, is here fleshed out and Mal made a much more likeable character. Ben Barnes plays the Darkling with scene-chewing relish and you can almost sense his disappointment at not having a moustache to twirl. The Crows - Kaz (Freddy Carter), Inej (Amita) and Jesper (Kit Young) - are great fun and it'd be interesting to see a show focused just on them. The "fantasy heist" storyline certainly made me wonder how much longer we're going to have to wait to see a Lies of Locke Lamora adaptation.

Shadow and Bone's first season (***½) on balance, is fine. It's enjoyable, reasonably well-paced and the integration of two different storylines works well (the attempt to add a third does not, though). The performances are solid and keep the show aloft whenever the over-expository dialogue and plastic effects threaten to bring it down. It does enough that I'd be interested in a second season. The season is available now worldwide on Netflix.

I don't believe I've read this series or any books from it, or even heard of it before; but upon bingeing this series I was plagued by near constant Déjà vu. I don't know if the tropes and plots were so generic that I'd read/seen them all before or if it carried elements eerily similar to other books but it was quite unnerving how often I started searching my memories for other source material.
That being said, I did binge it, so it was enjoyable enough, but hardly fantastic. Alina was well played and aside from one or to moments I thought her acting really quite good. Her eyes were particularly expressive in many moments and I wondered how such a young actor could have the personal experience already to re-create some of those emotions. How quickly she lost faith in Mal after a literal lifetime together with him, not to mention being in love with him was a little forced though. There was no obvious sense of time-scale for her being at the little palace but it would have been a month or two at most it seemed. And for an orphan from an orphanage she was a little naive at times about people's intentions.

Still, overall, this was one of the only fantasy TV series I haven't read first so I was probably able to enjoy it a LOT more, as normally I cannot enjoy series adaptations much at all.
Given the context, for me it was a solid 4/5 at this moment.