The Falcon and the Winter Soldier: Season 1

The Avengers have saved the world, but at a heavy cost. In the aftermath of the "Blip," life is returning to normal and those who vanished from the world for five years are having to work hard to find their way back into life, including Sam Wilson and Bucky Barnes. Sam has been left the mantle of Captain America but has not felt worthy to accept it, and is conflicted when the US government asks another soldier to step up. Barnes is trying to atone for the evil he did as the super-assassin known as the Winter Soldier. When a new threat arises, Wilson and Barnes reluctantly team up to tackle it. 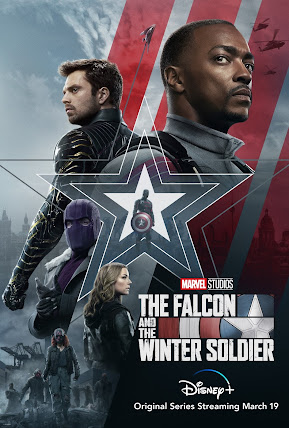 The Falcon and the Winter Soldier was originally slated as the first Disney+ original series set in the Marvel Cinematic Universe and actually created by the same team who worked on the movies, but COVID filming restrictions and rumoured extensive reshoots delayed it until after the debut of WandaVision. In the original plan you can see Falcon and Winter Soldier giving audiences a big, Marvel-style action spectacle before hitting them with the much weirder and more metafictional WandaVision, but circumstances reversed that order, which worked to WandaVision's benefit - a bolder, more original and stranger show than many were expecting - and unfortunately to Falcon and Winter Soldier's detriment.

That's not to say it's a terrible show. It's very competently written on a scene-by-scene basis and the cast are mostly excellent, from a returning Anthony Mackie and Sebastian Stan as the titular stars to the also-returning Daniel Bruhl and Emily VanCamp (both last seen in Captain America: Civil War as Baron Zemo and Sharon Carter). Wyatt Russell is splendidly annoying as the "new" Captain America, John Walker, and Erin Kellyman gives a measured, interesting performance as antagonist Karli Morgenthau.

The show's problems are mostly structural and its attempt to pack too much material into just six episodes. The series tries to be a societal commentary on Sam Wilson becoming the first black Captain America, despite his guilt when he learns what happened to other African-American members of the super-serum project after WWII, whilst exploring the psychological trauma Bucky is dealing with as a former HYDRA stooge and assassin. However, the show also tries to be a Rush Hour/48 Hours/Lethal Weapon-style buddy comedy, a villainous psychological study of both Zemo and Karli, a spy mystery about Sharon Carter and a commentary on immigration and borders. It's too much for the limited screentime and some of these plots are only dealt with briefly and not really mentioned again, like why Sam - a world-famous crime-fighting superhero who helped save the universe and is friends with people like the billionaire owner of Stark Industries - is now broke.

The series is on surer ground when the story focuses in on the two Avengers tackling enemy terrorists or dealing with off-brand WalMart Captain America's anger-management issues. The action sequences are generally quite good, and the visual effects outstanding, even if the opening set-piece of Sam taking down a helicopter sets a level the rest of the series can't really live up to (the expense of that sequence may explain why most of the other big action set-pieces happen at night).

What we're left with is a pretty solid story, but one which can lose focus for stretches of time in an attempt to tackle too many subplots and themes and ends up not really satisfyingly delivering on any them. Still, it does continue WandaVision's exploration of the Blip and how half the world's population vanishing for five years and then returning is a really huge deal rather than something to be brushed under the carpet and moved on from instantly.

Solid performances and outstanding action sequences make the one and only season of The Falcon and the Winter Soldier* (***½) worth watching, but an odd structure and rushed storytelling means it doesn't land as well as it should, and certainly not as engagingly as either of its sister shows in the first wave of MCU TV series, WandaVision and Loki. The show is available worldwide now on Disney+.

* A second season, should it materialise, would be made under the moniker Captain America and the Winter Soldier instead, apparently.