Fifteen years have passed since the assassination of Empress Jessamine, the tyrannical six-month rule of the Lord Ruler and the restoration of Princess Emily Kaldwin to the throne. Under the guidance of her rescuer, bodyguard and (eventually-admitted, scandalously) father, Corvo Attano, Emily has tried to guide the Empire of the Isles as best she can. When a coup takes place led by the witch Delilah and her father is neutralised, Emily is imprisoned, but her captors are unaware that her father has been teaching her his infamous skills of stealth and deception. Emily flees to the southern city of Karnaca and prepares to retake her throne, no matter the cost. 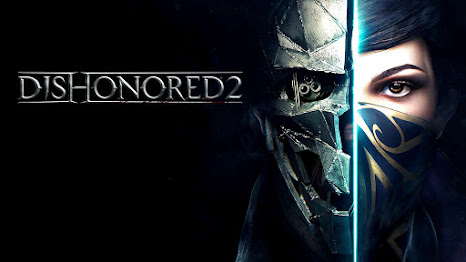 Dishonored, released back in 2012, was a breath of fresh air. Building on the groundwork established by the earlier Thief, Deus Ex and System Shock series in offering the player tremendous freedom in how they approached their objective, with a more modern user interface and better AI, it was a solid success both critically and commercially. It spawned two excellent expansions, The Knife of Dunwall and The Brigmore Witches, and, four years later, a full sequel (which yes, I've been extremely tardy in getting to).

Dishonored 2 is very much an evolution rather than a revolution. The same structure as the earlier game applies, with the game again using a recurring hub - in this case a ship - as a base of operations for Emily and her slowly growing number of allies to plot their next move. Once the next objective has been set, Emily travels to a new part of the city of Karnaca and is left to it. You can choose which option to take, whether to to engage in an all-out, frontal assault with a high casualty rate or a stealthier approach, using a combination of magical powers and the intricacies of the outstanding level design to find a way of sneaking up on your objective. You can also choose to exactingly explore every level for the optional objectives of stealing every single penny, object d'art and magical rune and bone charm, or simply proceed straight to your goal. You can choose to kill the primary target of the mission or find a way of removing them nonlethally from play, or in a few cases finding a way of converting them to your cause. 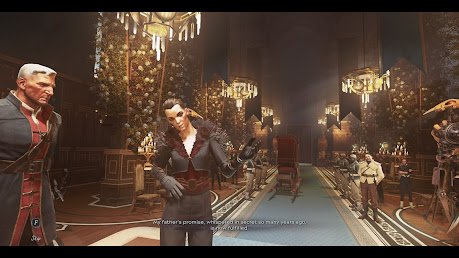 These decisions have a dramatic effect on the game's length, which can range from under ten hours for a confrontational, all-out violent approach to more than double that for a more exacting, stealth-based run-through, and also its tone. A violent approach which leaves the streets littered with corpses impacts on the game's "chaos" rating, with the city becoming more violent and unstable with later levels seeing more guards deployed and Emily's allies becoming less optimistic and even starting to fear her. A peaceful, stealth-based option sees Emily learning to become a better ruler, engaging more with the plight of the poor people on the streets and finding ways of turning her destructive enemies into more positive forces for later reconstruction. Even choosing a more positive approach can be more complicated than it first appears, with sometimes what appears to be a good choice having negative consequences and vice versa, which only becomes clear through exacting research of the various documents and audio files littering each level. The game has a large number of different endings based on your moral choices through the game, greatly rewarding replayability. The game also gives you the chance to replay it as Corvo (the protagonist of the first game), with a different skill set, though it has to be said this narratively doesn't make anywhere near as much sense as playing as Emily. The game also gives you the choice to play through it without using any magical powers at all, which is a formidable challenge should you also try to go for a stealth run on a higher difficulty level. 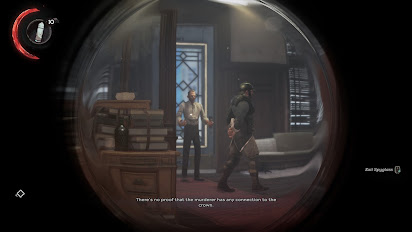 The game's story unfolds intriguingly, with Emily learning more about her enemy Delilah through written records, other characters' accounts and, in one dramatic moment, a temporally-warped ability to view her rise to power. The game takes into account that not everyone played the original game's expansions (which introduced Delilah and saw her go up against the arch-assassin Daud), so uses Emily's ignorance of those events as a way to get everyone up to speed on the plot.

Dishonored 2 takes advantage of sister studio id's formidable graphics tech (used to develop the Doom reboot) to deliver a stunning visual experience. The original Dishonored had impressive lighting and environments for its time, but its character models were underwhelming. The sequel has no such trouble, with fantastic, detailed visuals throughout. If anything, the graphics might be too good, with it sometimes hard to distinguish between collectables and background bits of scenery. In particular, it's sometimes impossible to work out when a piece of paper stuck to a wall is a bit of flavour or an actual letter with in-game information critical to the mission, which does mean a fair bit more random clicking on everything in sight than should really be the case. The atmosphere of the game is also a nice contrast with the original game, with the foggy, London-influenced metropolis of Dunwall giving way (mostly) to the tropical, sun-drenched, Mediterranean-ish city of Karnaca. 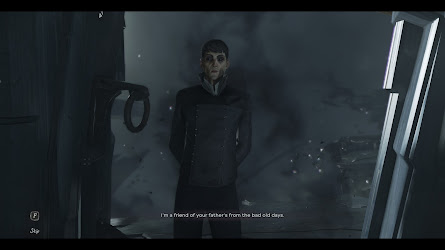 The level design is also gorgeous. It's not exaggeration to say that Dishonored 2 has some of the best level design in recent gaming history, with logically-constructed areas which pack secrets, hidden rooms, black market shops and alternate routes into often constrained spaces. Although Dishonored 2 was developed with the more powerful PlayStation 4 and Xbox One in mind, meaning the memory-mandated small levels of the original game are no longer an issue, the designers admirably resist going for the easy option of making each level as huge as possible, preferring to retain the tightly-curated design of the first game. They do let some missions sprawl a bit more though, with sometimes an entire elaborate urban level (most of it purely optional) surrounding the mansion or palace which is the primary objective of the mission at hand. 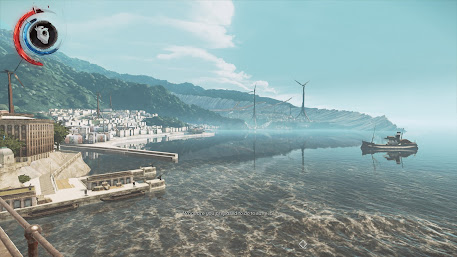 Particular mention, redundant at this point though it is, must be made of the game's two stand-out pieces of level design. The Clockwork Mansion is the ultimate express of Dishonored's steampunk ethos, an entire building whose internal walls, rooms and furniture can move around, rotate and switch places based on levers the player pulls. The first time you see the entire level around you transform into something else is quite something, and the fact that Arkane play fair and don't use magic to explain this, with instead each part of the transformation worked out in exacting and realistic detail, is all the more stunning. Even more remarkable is that you can skip the entire transforming aspect of the mission if you want to do a stealth run, instead finding your way "backstage" behind the walls and making your way to the mission objective without alerting anyone. You can also do both, doing a stealth run at first and then backtracking through the mansion, triggering its transformations, to find all its secrets and hidden objectives. 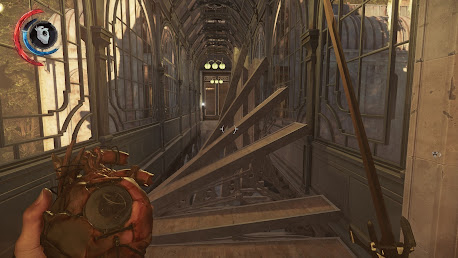 A later mission, "Crack in the Slab", takes the player to a mansion which has become unstuck in time. By using a special device, the player can "see" what is going on inside the mansion on the other side of the temporal barrier and then transport themselves back to that period. So for example, you find a destroyed room in the present day, position yourself correctly, and use the temporal device to check for guards in the previous timeline. Once sure they are not present, you can warp back to the previous time period, clear the obstacle and then return to the present again. The attention to detail here is jaw-dropping: some characters are present in both timelines and by killing their past selves, their present-day incarnations abruptly vanish. Similarly, you can change events in the past which also change the present-day version of the mansion, which can abruptly shift from ruin to fully-functioning home to a boarded-up-but-intact version. The ripples in time extend outwards: leave the mansion and you might find previously-maimed allies are now fully intact, and the feuding warzone you previously passed through is now a peaceful, well-ordered district under just rule. It's easily the most brain-meltingly impressive implementation of time travel in a video game to date.

Even the "ordinary" missions are a delight. The spooky Addemire Institute you visit early on is a masterclass in packing a lot of detail and player options into a small space, whilst the Grand Palace is a terrific, expectation-defying piece of design, more like a 1970s Bond villain's headquarters then yet another medieval edifice. 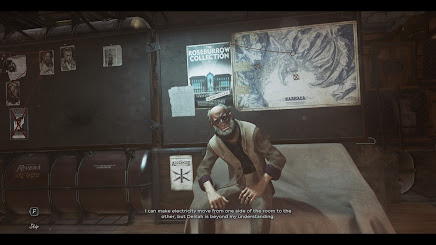 It's hard to find fault with Dishonored 2. The thematic idea of Emily learning how to become a better ruler or a tyrant based on player choices is well-implemented, the level design is among the very best in class and, even five years after release, it's a gorgeous game with an even better soundtrack than its predecessor. Perhaps the story premise - oh no, Emily's been deposed again! - could have been a bit more original. The original release was a bit buggy, but those issues have long since been fixed. The new ship base of operations is a bit less interesting than the pub in the original game, maybe. Beyond that there's no complaints to be had here.

Dishonored 2 (*****) is a fantastic game that takes everything good about its predecessor and improves on it, sometimes dramatically so. The game is available now on PC, PlayStation 4 and Xbox One. A self-contained expansion, Death of the Outsider, was later released to middling reviews (and I'll be getting to that shortly).

But that was before the time travel concept you mentioned, so I think I'm going to have to dust it off and try again!