Superheroes are real and have made the world a safer place...and a far more profitable one for their employers, Vought International. Hughie Campbell also learns how powerful that Vought can be after his girlfriend is killed in a collision with the super-speedster A-Train and they try to buy him off. Furious, he joins forces with vengeful vigilante Billy Butcher, who plans to expose the "supes" for what they are. Meanwhile, the gifted Annie January is offered the chance to join the biggest superhero team in the world, the Seven, but rapidly discovers that the real face of the superheroes is very different to the one they show the world. 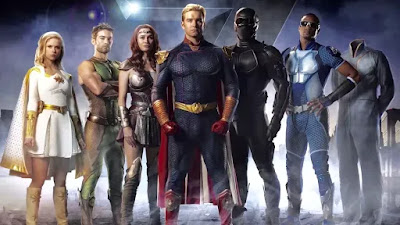 The Boys is based on Garth Ennis's 2006-12 comic of the same name. The comic was a searing takedown of the superhero mythos. Ennis, rather infamously, is not a fan of superhero titles and feels that in a more realistic setting, superheroes would be corrupted by their power and lack of accountability, becoming indistinguishable from the villains. This resulted in a ruthless, morally ambiguous and at times shocking title that attracted considerable attention for both its violence and its clear hatred of the superhero genre.

The Amazon TV adaptation of the comic is, mercifully, not quite as dark and grim. There's still a lot of violence, shocking gore and unexpectedly unpleasant events, but the TV series is not quite as reliant on it as the comic could be. Instead, the TV show focuses more on characterisation and the exploration of its world through the dual POVs of Hughie (Jack Quaid) and Annie (Erin Moriarty), with a lot of useful exploration being provided by Billy Butcher (Karl Urban) and Madelyn Stillwell (Elisabeth Shue) on both sides.

The cast is exceptional, with everyone delivering good work, especially Urban as he masterfully overcomes a genuinely dreadful British accent and Antony Starr as Homelander, this universe's equivalent of Superman (if Superman was suffering from a battery of truly worrying psychoses). Starr has a lot of different types of characteristics to play as Homelander undergoes a number of shifts in attitude and personality over the course of the season, and pulls them all off quite well.

The relatively modest episode count of eight episodes helps keep the story tight and focused, and the generous budget allows for some genuinely spectacular visual effects sequences. The Boys actually feels like a comic book TV show, unlike say the Netflix Marvel shows which felt like more ordinary TV shows which just happened to be based on comic books. There's also a dark sense of humour to the series, with the most outstanding sequence being one where Billy weaponises a super-powered baby to his own ends.

With high production values, a tight story focus and good performances, The Boys is never less than watchable. It does have some negatives, however. This is a relentlessly grim series, which is occasionally alleviated by the moments of dark humour but never for very long. The show is not just grim, it's cynical and it often feels like it's verging on the misanthropic, with almost every character revealed to be selfish, amoral, or even outright evil. There's also a glee to some of the character deaths and violence that feels unsettling. That certainly seems to be the intent, but it often verges into the gratuitous.

The show also suffers from comparison with its fellow Amazon superhero show, The Tick. The Tick actually did a lot of the same things - right down to its deconstructed failure of a Superman analogue and a corrupt superhero organisation - but did it with much more flair, genuine humour and optimism. If, as some may feel, Amazon had a choice between which of two graphic-novel-adaptations-helmed-by-a-former-Supernatural-writer to proceed with, the conclusion at the moment is that they probably chose the wrong one.

The first season of The Boys (***½) is impeccably produced, well-acted and with a strong narrative momentum. It's also so dark that at times it verges on the miserable, and its relentless cynicism and belief that almost all human beings are scum becomes wearying. It is available to watch now in the UK and USA.

Season 2 of The Boys recently finished shooting and will air on Amazon in 2020.
Posted by Adam Whitehead at 16:12