GAME OF THRONES: THE DANCE OF DRAGONS gets official pilot order at HBO

As per Hollywood insider Michael Ausiello, HBO has low-key given a formal pilot order for a second Game of Thrones spin-off series. Earlier today it was confirmed that the first spin-off, The Long Night, had been dropped after an unsatisfying pilot was produced. 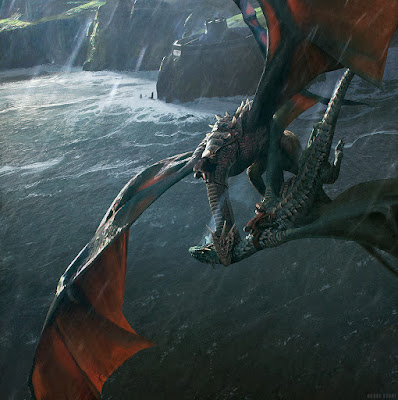 This second spin-off is based on the Dance of Dragons, the civil war within House Targaryen for control of the Iron Throne, set about 130 years before the events of Game of Thrones. Unlike The Long Night, which was a lower-budgeted character drama set in a much more primitive setting, The Dance of Dragons (not confirmed as the final title) will be a full-blown war epic, featuring pitched battles, political intrigue and several significant dragon-on-dragon battles and duels.

The new project draws heavily on Fire and Blood, George R.R. Martin's history of the early Targaryens, which was published in 2018. Ryan Condal (Colony) is serving as showrunner, executive producer and head writer on the new project, which is expected to shoot in 2020.
Posted by Adam Whitehead at 23:09