The Light Brigade by Kameron Hurley

The Big Six - the mega-corporations that rule Earth - are at war with the colonists on Mars, who have rebelled and unleashed a horrendous attack on Earth that has devastated an entire city. Thousands of the young and dispossessed are recruited into the corporate armies and transported by FTL to Mars and other places on Earth to fight the enemy. But for one recruit, Dietz, the war they are fighting is not the same as everyone else. The jumps send Dietz backwards and forwards through the conflict at random, but the question is if they can change the future and stop the war? 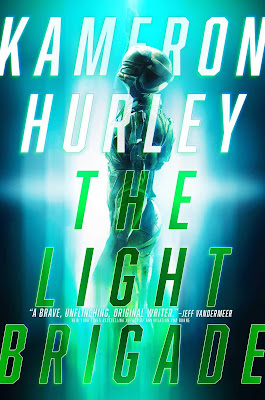 If there's one constant about science fiction, it's the acknowledgement that in the future people will still have to go to war and fight wars of varying degrees of pointlessness. The weapons and technology may change but the horror and loss will remain the same. SF has a fertile backlog of novels which have looked at war through the prism of new technology: Robert Heinlein's Starship Troopers (1959), Harry Harrison's Bill, the Galactic Hero (1965), Joe Haldeman's The Forever War (1974), Hiroshi Sakurazaka's All You Need is Kill (2004, filmed in 2014 as Edge of Tomorrow) and John Scalzi's Old Man's War (2005) are among the most notable. Each takes a different approach - Harrison's is satirical, Haldeman's is tragic - to the same basic idea of people fighting and dying for causes both noble and foolish.

The Light Brigade is Kameron Hurley's contribution to this subgenre. It is her second stand-alone SF novel (after the fine The Stars Are Legion) and the first which moves away from seeking out brand new ideas and settings to adopting a more classic SF approach.

The result is an unbounded triumph. The Last Brigade is Hurley's finest novel to date, a fast-moving, intelligent science fiction war story that reflects on the pointlessness of war, the evils of unflinching jingoism and the cynicism of corporate culture. It's also a remarkable character piece, all the more remarkable because the book hides a lot about its protagonist, peeling back the layers one light-jump at a time as we learn more about them and the war as they are experiencing it.

As with her previous work, this is a book that feels angry, with the characters trapped in situations beyond their control and trying to find a way out. Dietz is resourceful, courageous and occasionally hot-headed (although not as much as some of Hurley's previous protagonists) and as bewildered as the reader at what is going on, and it's interesting to see the character putting the pieces together at the same time the reader does. The reader comes to understand the story even as Dietz does, and also understands their own nature.

The book is fast-paced, with a relentless pace, but which also breaks up the action into distinct episodes as Dietz finds themselves in a new time period and has to work out how events in this time period are relating to those previously experienced. The book asks some interesting questions about control and volition and the first half of the novel can feel a little passive, as Dietz is reactive to events, but this changes in the second half as Dietz is grounded in several of the time periods and is able to spend months at a time working on ideas to see if the future (or the past) can be changed. The result is that the book is thoughtful and action-packed by turns, with a strong ending that succeeds in making sense of all that came before.

The Light Brigade (*****) is a superlative SF novel of science and war and Kameron Hurley's finest novel to date. The book is available now in the UK and USA.
Posted by Adam Whitehead at 14:55

Another nice review, Werthead. I've downloaded a copy for my Kindle.

You are costing me a small fortune, now. :)