Sword of Destiny by Andrzej Sapkowski

Geralt, the witcher, continues his journey through the Northern Kingdoms. He kills dangerous monsters for coin but also finds his path entwining with that of the mighty, of powerful sorceresses, generals and kings. But his journey is also a circle, leading him back to a promise he exacted six years ago from the Queen of Cintra and a price he demanded, but is no longer sure he wants paid. 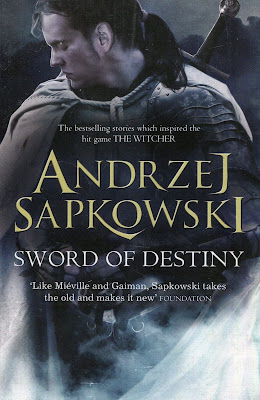 Sword of Destiny is the second book in the Witcher series, following on from The Last Wish. Like that book, this is a collection of short stories and novellas linked by Geralt and several other recurring characters, such as the bard Dandelion and the sorceress Yennefer, and also by a thematic element: the growth of Geralt as a character and the realisation that he has a destiny he is unsure he wants fulfilled but may not have any control over.

Several of the stories are concerned with Geralt's relationship with Yennefer, and the fact they love one another but also cannot be together, and how they both handle the issue. "A Shard of Ice" at first appears to be an amusing love triangle story, with Geralt and a sorcerer squaring off over Yennefer's favour, but it soon becomes powerfully bittersweet and even a little tragic. The opening story, "The Bounds of Reason," feels more like a traditional Geralt romp with the witcher called in to help neutralise the threat of a dragon, only to find matters complicated by politics.

"Eternal Flame" may be the most fun story in the collection and sees Geralt visit the great city of Novigrad and have to deal with a doppelganger. A smart and funny story, this is the one that arguably feels the closest to the video games, particularly The Witcher 3, which has a quest which is a direct sequel to this story. "A Little Sacrifice" is a story about mermaids and thwarted romance which takes an interesting turn towards the Lovecraftian and becomes one of the more foreboding stories in the series. "The Sword of Destiny" takes the witcher into Brokilon Forest and a confrontation with his destiny, the child Ciri who will become so important in the remaining books.

Arguably the highlight of the collection is the concluding story, "Something More," a disjointed story which unfolds in different time periods as Geralt recovers from a serious wound. The story jumps back and forth in time, revisits numerous characters, hints at Geralt's parents and history, and introduces the threat of the Empire of Nilfgaard and its first invasion of the Northern Kingdoms. A surprisingly lyrical and effective mood piece, this may be the best narrative Sapkowski has written to date, remarkable for its effectiveness despite its brevity.

The result is an extremely strong collection which develops the characters and world in tandem. There aren't many negatives, except that Sapkowski hails from the "make it up as you go along" school of worldbuilding, so the failure by anyone to mention the Nilfgaardians or their devastating war before the final story feels a bit odd. There are also issues with the translation: David French feels a lot stronger a translator than Danusia Stok (who translated the first and third books in the series), but there's occasional awkward phrasing, such as the use of the word "jacket" rather than a more era-appropriate alternative ("gambeson" seems to be a better choice), although this may also be seen as reflecting Sapkowski's preference for modern terms and language.

This is more than answered by the book's successful exploration of the overall themes of war, loss, romance and hope. Sword of Destiny (****½) is a surprisingly melancholy and thoughtful work which is a very rewarding read, and represents a big improvement over The Last Wish. It is available now in the UK and USA.
Posted by Adam Whitehead at 11:44

Email ThisBlogThis!Share to TwitterShare to FacebookShare to Pinterest
Labels: andrzej sapkowski, sword of destiny, the witcher

Oh, I thought The Witcher (book) series was finished. Good to know!